There’s been a lot of hype surrounding Suzuki’s 2013 model RM-Z250 since its release mid-September, with many highlighting the variety of meaningful modifications as largely successful when it comes to performance.

Suzuki’s leading outdoor performer domestically in 2012 was Zero Seven Motorsports privateer Adam Monea, the Victorian stunning in the MX2 class of the MX Nationals with a moto victory at Wanneroo on his way to seventh in the series – his season cut short due to a heavy crash at Moree’s penultimate round.

The supercross season was more successful for Suzuki, as Steven Clarke finished fourth for Motul Pirelli Suzuki and Kiwi rookie Scott Columb was one position behind him in fifth. Two RM-Zs in the top five showcases the bike’s potential.

Personally, I’ve been a big supporter of the RM-Z250 since we launched MotoOnline.com.au, so to have a heavily revised model released for 2013 is a great thing for us. The 2010 model was awesome, 2011 saw a refined model and now, this 2013 model has improved in places we didn’t think were possible. 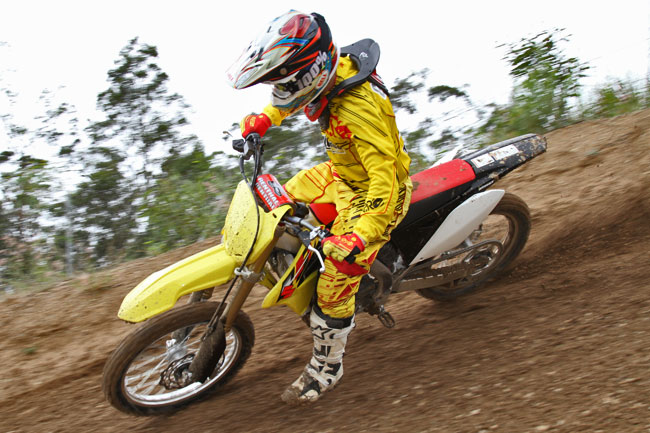 According to Suzuki, key goals for engineers when developing the all-new 2013 RM-Z250 were to refine engine components to deliver more mid-range power, improve overall handling and reduce noise levels without compromising performance.

Our test took place with Motul Pirelli Suzuki at Lakes in New South Wales, a track that has a series of undulating hill sections. Despite it being a brand new bike out of the box, the RM-Z was spectacular in the way it pulled up the hills and I would say that engine performance is one of the defining factors of the 2013 edition. 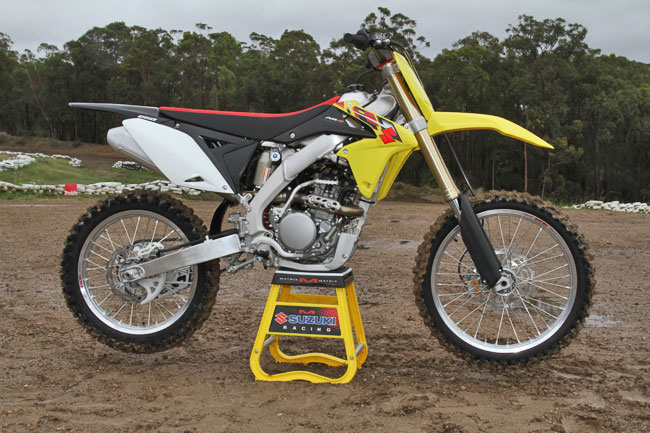 The 2013 Suzuki RM-Z250 is heavily revised for the new year. Image: Alex Gobert.

Put simply, that intended increase of mid-range power is felt from behind the handlebars, but it hasn’t lost any top-end performance. It picks up revs quickly, complete with a smooth throttle response, then pulls its way through the rev range as you work your way up through the gearbox.

There’s an all-new five-speed transmission, designed to smooth out shifts, combined with a change in the clutch release cam shape reducing the force required to operate the clutch and enhancing the clutch feel. It too is impressive, because although the RPM was high heading up the hills, each click through the gears were seamless. Once broken in further I’m sure it’d be even better.

Another key goal of Suzuki engineers was to redesign the exhaust system so it now meets new FIM sound control regulations, thanks to a 40mm extension of the exhaust pipe and redesigned internal muffler parts. Suzuki claims these changes increase bottom to mid-range power and torque, without compromising engine performance or the all-important exhaust note.

To fine-tune fuel preferences to suit track conditions, two couplers are enclosed allowing the rider to easily change fuel settings by connecting either coupler. We didn’t get a chance to test them just yet, but we will do in the coming weeks… 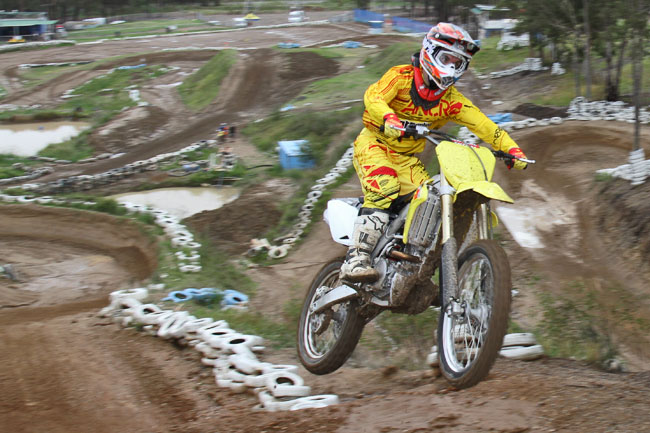 The engine was impressive on the undulating hills of Lakes. Image: Adam Spence.

It’s difficult to fault this motor in stock trim and our initial impression is that it’ll translate into a very competitive race bike with little modifications. On top of that, Suzuki has its Suzuki Support Rider program, offering generous contingency payments on national and state championships.

Suspension-wise, Suzuki has fitted the popular 48mm Showa Separate Function Fork, which has the spring fitted within the right leg, while the left leg incorporates the cartridge assembly to manage damping. The result is less friction, increased damping and an overall weight saving. What I like about the SFF fork is that it responds so well to changes in the pre-load side (right leg), but more on that in a moment.

Straight away we set the sag at 102mm (well, it was already perfect for my weight when we went to do it) and I set off on a wet, but reasonably grippy track. The shock for me was able to tract so well on the uphill bumps, with just minimal kick on a few of the steeper downhill braking bumps. 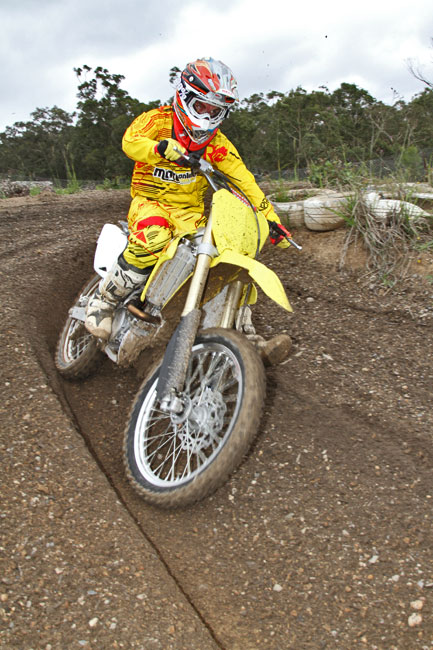 The RM-Z250 remains one of the best steering bikes in the class. Image: Adam Spence.

The fork also felt really comfortable for me from the outset, although we did do some minor tests with Jay Foreman just to feel the response. Two turns of pre-load made them noticeably stiffer, causing the front-end to ride higher, but only slightly compromising the initial turn in.

It did make the front feel slightly rigid for me though, causing a little headshake that I hadn’t experienced earlier and removing a touch of confidence. So, just for testing’s sake, we then removed four turns of pre-load (so it was two turns less than stock). In total, there are 12 standard options, but the bike comes right in the middle at six.

With the softer setting, I found the fork compresses too much on the downhill sections, which limited my ability to charge them harder. Steering was still positive and flat turns were fine, but this setting was just too soft for this particular test. So, back to the stock setting we went and I immediately had the feel I prefer once again. Too easy!

I would say for your average racer and heavier rider you’ll be making them a little stiffer after a few rides, but at this particular point, the stock setting felt best in the tricky conditions and on the track that we were riding during this particular test. 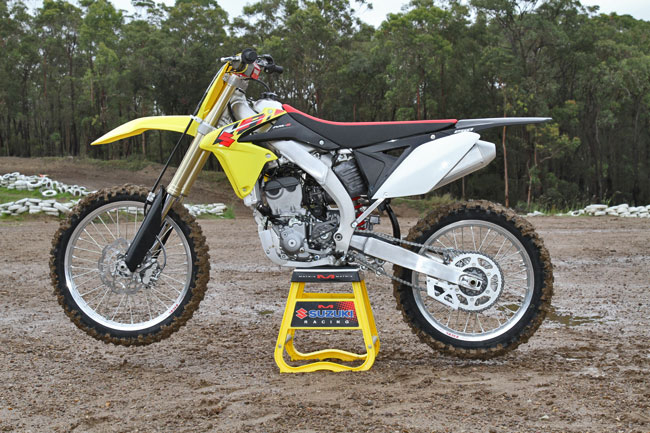 It’s a sleek ride for 2013, but the black plastics do wear quickly. Image: Alex Gobert.

Along with the new fork, Suzuki has redesigned the frame and modified the seat to optimise rigidity, improving the handling and also adding to the stability at speed. As mentioned above, stability was on point and the bike has a real racey feel about it stock.

Ergonomically the bike retains that tight Suzuki feel, narrow and comfortable, with that awesome alloy tank adding to the bike’s strong points. I’m not a great fan of the increased use of black plastics in the shrouds and rear guard though, mostly because they looked worn pretty quickly after a few hours in the mud. Apart from that, the 2013 RM-Z250 is visually very nice.

All in all, the 2013 Suzuki RM-Z250 is a neat bike and one that has received rave reviews worldwide. You can’t fault many aspects of it at all, and in fact, we liked it so much that we’ve decided to hold onto it and use it as our Project Moto model for next year. Stay tuned for a heap of updates and videos when we head back out to the track again!

The 2013 Suzuki RM-Z250 is available now for a recommended price of $10,890 in Australia. Click this link for further detailed technical information on the model. 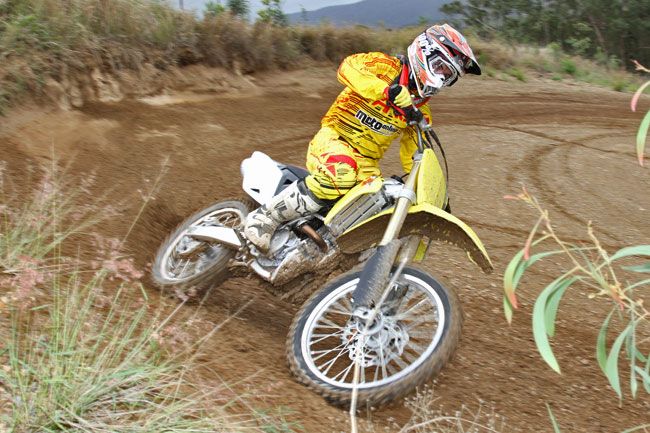 MotoOnline.com.au will hold onto the 2013 Suzuki RM-Z250 into the new year. Image: Adam Spence.