There’s plenty of talk about the big four coming into the 2013 supercross season. With these racers being Ryan Villopoto (two-time and ’12 SX champ), Ryan Dungey (2010 SX champ), James Stewart (two-time SX champ) and Chad Reed (two-time SX champ). These are the four riders that look to have an inside edge and they’re called the “big four” for a reason.

But if you remember, after the 2011 supercross series was over, it wasn’t the big four, it was the big five as Honda’s Trey Canard firmly established himself as a rider that can straight-up win races against the other four. A look back at that 2011 series proves that very point.

Before the one-week break in the series, the #41 rider had won two out of the last four races and scored a third in one of the other ones. Despite a horrible Daytona race, Canard was only twenty points out of the lead and with his three wins, he had more victories than Reed and Dungey and tied with Stewart for second most behind Villopoto. Canard was on a roll going into the last three races but first, some outdoor testing was scheduled.

And that’s where things got sideways for Canard. Out at Competitive Edge, Trey held it pinned a little too much over a rise, landed on his front wheel and re-broke his femur from the year before. That was it for Canard’s SX season and most of his outdoor year as well. 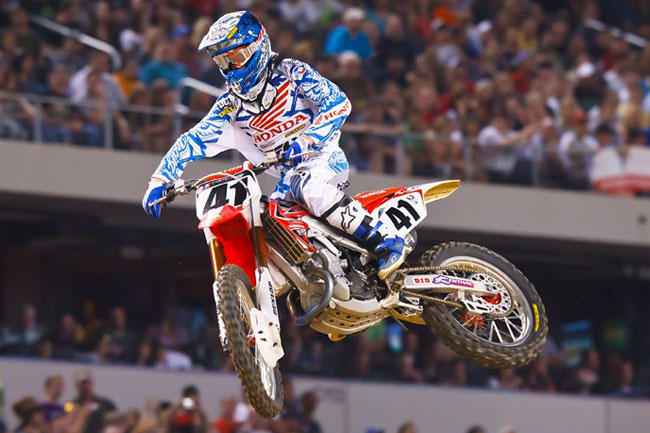 Trey Canard was on a roll before injuries struck him down for a long period of time. Image: Simon Cudby.

He came back at round eight of the motocross season, scored a third in his first moto back and then promptly re-broke his leg in the same spot. A faulty pin at the top of the rod put into the femur was the culprit. Another surgery awaited Canard and he came into 2012 hoping to put the injury bug behind him.

We all know what happened this past year. Canard, staying safe by doubling the triple at the third round in Los Angeles when he picked up a tuff block cover, was landed on by Ryan Morais in a horrific accident. In some respects, Trey was lucky that he only broke his back, it could have been a whole lot worse. But yet again, Canard was out for the year.

The roll that Canard was on in capturing the 250MX title, representing (and winning with) Team USA at Lakewood and coming into 2011 as one of the hottest young stars in the sport seemed to be a very long time ago. Since then, it’s been injuries, a couple of bright spots and yet more injuries for Trey.

Since that crash while outdoor testing, Canard’s lined up for a total of four races. And that’s it- four races in a year and a half and he’s definitely a question mark going into 2013. Some may want to put him right back at his old level but it says here that’s not something that is going to happen – at least not right away. Trey’s once again healthy, his spine protected by a titanium cage and getting ready to make a comeback yet again. Canard will surely be hoping for more of these moments when he returns in 2013. Image: Simon Cudby.

According to the Honda people I’ve spoken with, they don’t notice any drop-off from the Canard pre-injury. He’s got his trademark scrub back, he’s aggressive and doesn’t appear to be affected by any of this “he’s fragile” talk. A few ticks of a second off of teammate Justin Barcia in some recent testing that took place at Barcia’s own track shows he’s where he needs to be.

His coach Tim Ferry seems to concur “You never really know until it’s race time how someone is going to do but he’s taken this recovery so serious and with so much determination I expect him to be right back to where he was at some point.”

Trey’s a bit of a self-made star, he was never a “can’t miss” prospect and although he came into the pros winning the 250 East SX title, it was a bit of a dry spell from there. Losing his father at a young age, earning a GEICO Honda ride and winning in the 450SX class all indicate how many things he’s had to overcome so far.

So yeah, he may not be right there with the “big four” to start the year off but is anyone willing to doubt that he can’t get back there? I know I’m definitely not.