Our sport of motocross/supercross has been dominated by the new generation four-stroke for years now. However, the old-school two-stroke has seen a resurgence recently with Kale Makeham winning the Under 19s supercross championship and numerous riders worldwide getting back on board the two smokers! Let’s compare the two breeds.

Once upon a time the only four-stroke you found at a motocross circuit was someone’s trusty old Honda XR250 that they accidentally left on the trailer and in doing so, parked their car about a kilometre away from the pits so they didn’t get bagged out by their buddies. The bike itself most probably weighed that much that you would need 10 of your closest friends to help you lift the big girl off the trailer anyway… How times have changed.

The cool smell of aviation fuel mixed with your favourite two-stroke oil is almost never experienced nowadays, unless you find some remote national park infested with paddock bashers on old school machines. Nowadays, the pits at race tracks around the world are filled with state of the art, new generation four stroke bikes that feel like they have been on a Jenny Craig diet their whole life while being designed to run on plain old pump fuel. 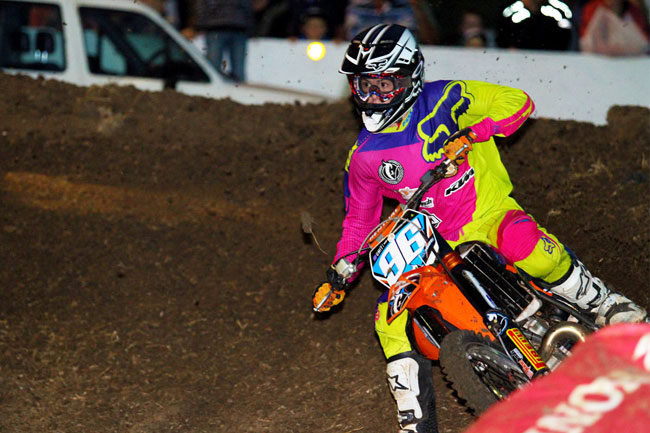 Light as a Feather
While the new generation four strokes are considerably lighter than their predecessor, they still are noticeably heavier than their equivalent two-stroke and here is where the main benefit lies in the argument of two-stroke versus four-stroke. Let’s say we have a young junior rider who is just about to step up from an 85cc or 150cc machine to a full size bike. If the rider is slightly on the small or light side then the lighter 125cc two-stroke may be a viable option over the slightly heavier 250cc four-stroke.

The ultimate way to test which bike would suit your young rider better would be to have two perfectly set up bikes, one two-stroke and one four-stroke, and spend a full day testing both machines in race condition. Your testing should consist of starts, laps and motos. You should use split times and record them in a log book or diary to compare when you are finished testing which will help you make an educated decision.

You should also bring into consideration the rate at which the riders lap times drop off as one bike may cause the rider to fatigue quicker than the other. Now unfortunately, unless you are a full factory rider or have unlimited money to burn it is highly unlike that you will have these two set up bikes at your disposal. In which case you need to plead, beg or do whatever you have to do to borrow a couple of bikes for your quick comparison.

Smooth as Silk
The main strength of the four-stroke is the power and more importantly its delivery. The four-stroke machine, when ridden correctly has the potential of making your ride feel like a walk in the park. The break neck, G force effect you feel when a two-stroke’s power band kicks in is not there.

In its place is a silky smooth power delivery that has no major highs or lows but just keeps on producing power no matter if its bottom end, mid-range or top-end power you are after. But be warned, there is a way you can turn this dream ride into a nightmare. By riding a four-stroke in a gear that is way too low you not only rob the engine of its smooth characteristic but you bring into play a part of the four-stroke engine that can bite you if not treated properly. The engine brake!

The lower the gear you are in the more effect the engine brake has on your bike when you back off the throttle. Now if you are an experienced top level rider you will know how to use your engine brake to your best advantage, but if you are new to the four-stroke world you may find yourself stepping over the bars as the dreaded engine brake takes you by surprise. You should always try to chug your four-stroke around in a slightly higher gear and when you do your bike will reward you with a trouble-free ride.

Maintenance
I’m sure I’m not alone when I say that the thought of working on a four-stroke engine scares me a tad. Put a two-stroke in front of me and I’ll have the thing stripped down, split cases, rebuild the top and bottom end in a few hours. However, the basics of chain, filter, sprocket etc is about where my skills end on today’s four-strokes.

Even jetting/tuning, which I used to really enjoy playing with on the 250cc two-stroke is a bit on the confusing side with these four strokes and their fuel injection. However, there is no doubting that nine times out of 10 you can purchase your four-stroke machine straight off the showroom floor and get away with just riding the thing without fiddling with it too much.

The Future is Here
One thing is for certain and that is that four-strokes are here to stay. With fuel emissions and laws being passed around the world the two-stroke bikes will become fewer and fewer. So my advice to junior parents out there is to get your kids used to four-strokes as soon as you can. There is a completely different art form to riding them and the sooner they learn those skills, the sooner they will adapt to the bigger bikes.