Last weekend I was in Paris for the annual Bercy Supercross and as usual, it was a good time with some great racing. There were two riders who stood above everyone else and in the end, Jake Weimer captured the King of Bercy title with 1-1-2 main event finishes. Those scores just narrowly beat out Eli Tomac’s 2-2-1 and Justin Brayton was a distant third with 3-3-3 scores.

I could write about my weekend here but I already did just that for Racer X which you can read about HERE http://www.racerxonline.com/2012/11/14/observations-bercy in my Observations column. So for now, I’ll expand on a couple of points in a larger look at Bercy and the riders that were there.

Near the end of the year, Eli Tomac dropped hints that he wanted to get on a 450 as soon as possible and after the Monster Energy Cup, he told me that he wants to ride the 450 on the other coast (which would be east because he’s the defending 250 West champion and will be lining up there for GEICO Honda) and as well, the 450 outdoors.

In short, Eli is all about getting on with his career in the premier class and riding the factory Honda bike at Bercy probably didn’t do anything to quench his thirst. Eli and his family think that he’s too big and giving up too much against a rider like Blake Baggett (I’d estimate that Baggett’s 130 pounds to Tomac’s 160) and want to just move to a class where the size of a rider isn’t so key. I’m not so sure this is as big of a handicap as Tomac thinks it to be. 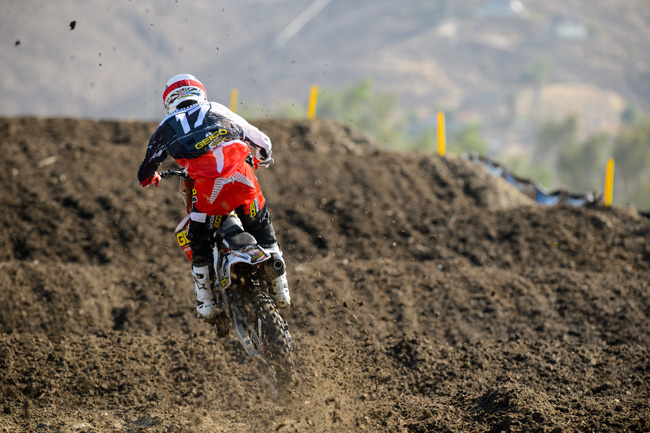 Eli Tomac has made it no secret that he wants to move to the premier class permanently. Image: Simon Cudby.

His average starting position was only three worst than Baggett, he led the second most laps and won the second most races on the year. His terrible last national makes the points gap between him and Baggett bigger than it really was. In short, he’s more than capable of winning the 2013 250 MX title in my opinion, the stats back it up.

And factoring in all of this is Tomac’s contract is up and the end of this year and Honda wants to definitely keep one of the rising stars of the sport. If Eli and his family want to move up to 450’s in 2014, there’s nothing anyone can do to stop him from selecting a ride with someone that provides him with that chance.

Honda has to in effect, make room for him somewhere on red. Either by adding to the team they have now (Justin Barcia and Trey Canard) or putting him on a team like GEICO or Chad Reed’s Two-Two Motorsports. GEICO Honda already runs a 450 program with Kevin Windham and I hear that they could expand into another truck with Tomac and Windham on a 450 team so there’s that. As always, money and quality of equipment (not really in this order) are a couple of factors in where Tomac goes.

What does Honda do for this year though? Do they let Tomac run a 450 outdoors for GEICO and what if they have injury, do they bring him up to the factory bike for the east side 450 races? Or are they cautious with Tomac and protect him by just letting him ride the 250 west series as well as the 250MX series where he’s probably Honda’s best hope for a motocross title? 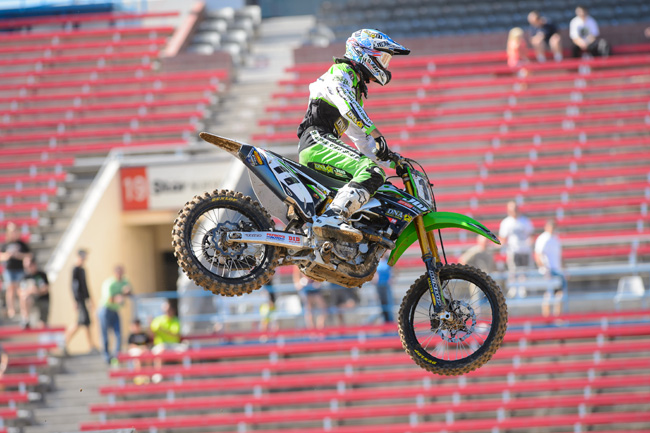 Kyle Chisholm was unable to defend his King of Bercy title in 2012. Image: Simon Cudby.

We know what Tomac wants, he’s stated it time and time again and with his delicate contract situation coming up in the back of their mind, what does Honda do? That’s what we’ll all be watching

Kyle Chisholm showed up at Bercy with the number one plate on his Kawasaki and as the winner last year (on a privateer Yamaha) was in the pre-race talk as someone that could win. But this year it was not too be as Kyle wasn’t on Weimer or Tomac’s level and as a matter of fact, missed most of the last day when he caught his foot on a tuff block and possibly pulled some ligaments.

It’s been an up and down year for Kyle on the Jeff Ward Racing Kawasaki team as he never gelled with the Kawasaki and although he stayed relatively healthy this year, he didn’t take that step up that many thought he would. And as of mid-November, he still doesn’t have a locked in ride either.

Chisholm’s probably the fastest rider still left on the market and it looks like he might be on a Yamaha team of some sort for 2013 but that’s not locked in stone. Just one year after winning Bercy, looking like he had a great Jeff Ward Racing Kawasaki ride lined up, Chisholm’s on the outside looking in and with a possible injury at that. Oh ye motocross gods, you giveth and taketh away quite a bit. 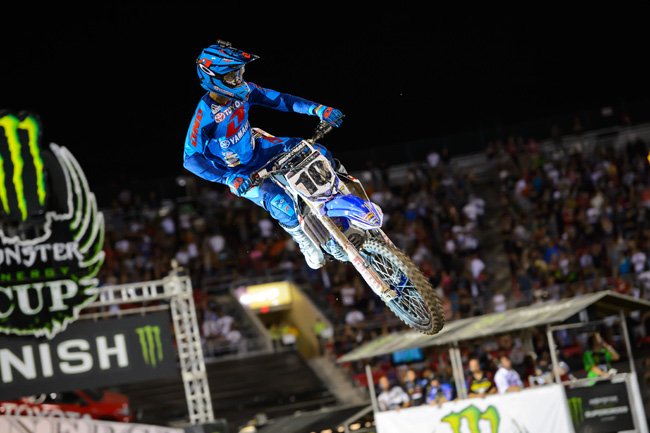 Justin Brayton is a believer in the Yamaha 450, watch for him to remain consistent and fast in 2013. Image: Simon Cudby.

Looking forward to seeing what Justin Brayton can do next year, he’s back on a JGR Yamaha and as I wrote in my Racer X column, he admitted to me that the factory Honda he rode last year, while great, wasn’t the end all and be all for him winning races. Brayton was close to Tomac and Weimer at Bercy but wasn’t on their level and settled for third overall.

Brayton won Genoa SX last weekend in front of Tomac so it’s obvious that his speed is there and in talking to Brayton, I think he could be where he was this year, if not better in 2013. The Yamaha machine is obviously somewhat controversial but Brayton’s always stated he likes it, he’s done well on it and I don’t think you’ll hear much bad-mouthing of the machine if things don’t go Justin’s way.

He also mentioned that the teams ill-fated signing of James Stewart, while obviously not working out, did produce a better Yamaha YZ450F and he thinks he’ll benefit from that. The whole hand crafted aluminum tank that makes the seat tank area slimmer is a help as is the suspension developments. Look for the JGR team to join the air fork brigade at Anaheim with their Showa’s also.

My European sources say that the new 2014 YZ450F (that I would guess will come with a production version of JGR’s tank set-up as well as the FMF header that wraps around the cylinder head) is going to be a much better chassis with the same reverse motor set-up and will handle much better than the current bike. No doubt Brayton will have this set-up ASAP and I’ll bet that will help also. Can Brayton win a race? Not sure really but one thing is for sure, it won’t be for a lack of trying.