Just two weekends of racing remain in the domestic racing season, marking the all-important second half of the Terex Australian Supercross Championships. It’s only a four-round series, so with two rounds in the books, the titles are going down to the wire over the next fortnight.

Toowoomba will be key in this series for many, because it will set their mindset for the finale and that is what it will all come down to. We are expecting the Newcastle round to be a huge one, so it’s shaping up to be a massive final.

The question is, can Reed somehow keep himself in realistic title contention despite missing round one? Right now Reed is seventh in the series and 22 points behind round one winner Jay Marmont, so he will need some luck on his side to catch.

What we are seeing more than anything in this supercross series is the requirement of consistency. The championship can be lost quicker than it can be won, meaning that every single round counts. Marmont and Dan McCoy have been the most consistent in SX-Open to date, however we are only at the halfway point. There is no way you can count Lawson Bopping or Jake Moss out at this point either. Can the TwoTwo Motorsports entry make it to the top of the SX Open points ladder? Image: Simon Makker/Makkreative.com.

With Billy Mackenzie all but confirmed to be joining Bopping at CDR Yamaha in 2013 for the outdoors, it’s hard to imagine the mindset that McCoy is in at this stage. He’s right in with a shot at this title, a miracle considering he was drafted in late to CDR, but then again we have to remember he finished third in 2011.

I’ve said it before and I will likely say it again down the track, but the unfortunate thing for a rider like McCoy who is a supercross specialist of sorts is that our season favours outdoor riders. It’s basically the opposite to the US, where SX has more rounds and comes first on the calendar.

International Entertainment Group managing director Yarrive Konsky revealed this week that he’s considering hosting further rounds as a ‘sideshow’ to key motorsport events in the future, including rounds of the V8 Supercars and Formula One. He also mentioned potential music festivals as an option.

What that’s basically doing is taking the sport to the fans, rather than trying to attract them specifically to supercross. The idea is to show these Aussie motorsport enthusiasts just how professional and entertaining supercross is, so down the track in the future they may venture out to standalone events – a very realistic possibility.

While we don’t want to see the entire series made up of these types of events, the positive coverage supercross received at Phillip Island last month was priceless in a lot of ways. Of course there are a few things that need to be improved upon and Konsky admits there were a lot of lessons learned at MotoGP, the end result was definitely a good one.

Last weekend saw Reed outback with TwoTwo Motorsports team members Lars Lindstrom and Mike Gosselaar. It’s a great pastime of Chad’s while he’s home and a long way away from the pressures that he’ll face come Anaheim 1 in around eight weeks time. 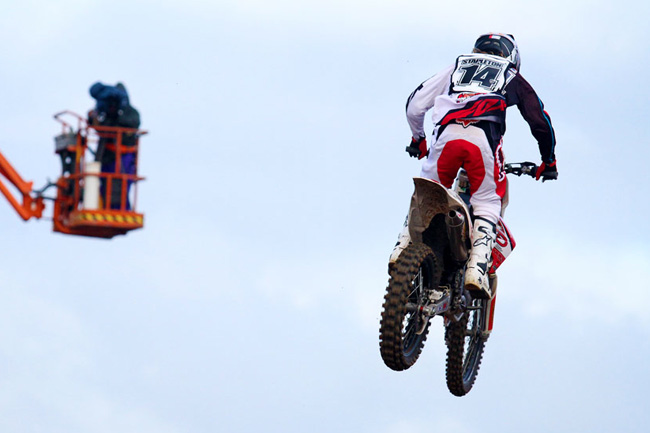 The worst news of the week this week was that leading privateer Geran Stapleton was injured in a practice crash. Fresh from a spectacular second at Phillip Island in the Lites, he had moved to second in points and has so far been a revelation in this series. Everybody loves to see the underdogs excel, so I along with many look forward to seeing him bounce back in the 2013 season.

Speaking of the BCP team that Stapleton is part of, Lee Hogan has been one of the first in Australia to take delivery of the 2013 Honda CRF450R and he’s been putting it through its paces down in Victoria. Cheyne Boyd has been right there alongside him for much of it and initial reports from the pair is that the stock bike is a weapon.

Already next year is shaping up to be an improvement for racing in Australia, both outdoors and in supercross. Kevin Williams and WEM are full throttle working on the MX Nationals, while Yarrive Konsky and IEG have exceeded expectations so far with supercross. For teams and those with vested interests in the sport, we could see the sport stabilised across the board better than we have in a number of years.

It’s the enthusiasm of both Williams and Konsky that benefits the sport, and although they are very different individuals, they both share the same goal of increasing the popularity of our sport on a domestic level. As a media outlet we take a lot of comfort in both series’ current direction and I believe that extends to the riders, teams and privateers in Australia.

Next year we are likely to see 10 rounds of MX Nationals again and then at least five supercross rounds, however that’s yet to be confirmed by either WEM or IEG.

That’s all for this week, thanks for stopping by!