What a race we saw last Saturday night right here in my hometown of Las Vegas, Nevada, USA. The 2012 Monster Energy Cup has come and gone and with it, some invigorating developments in the sport have arisen from the MEC. We saw on live TV the rise of a kid, the return of the champ and the first race as a big bike rider of the future.

For more on the MEC, click here to check out my column on Racer X about the race but I couldn’t fit everything there so here are some more thoughts from the MEC as well as rumors and more from the pits.

Justin Barcia won the race with some inspired rides and I know it’s super easy to say and makes me look like a super genius but really, you could tell that it was going to be a successful weekend for Bam Bam on Friday night. Why Friday night? Because Feld Motorsports (the promoters) held a press conference on Friday night at the Stadium and for the first time that I can ever remember, the riders rode the track under the lights.

And it was there that Barcia went out and was clearly attacking the track harder than anyone else (Chad Reed, Ryan Villopoto, Justin Brayton, Ryan Dungey, Tyler Bowers and Adam Cianciarulo were the ones chosen to ride), he was flicking his CRF450 more sideways than anyone else and generally looked really impressive. 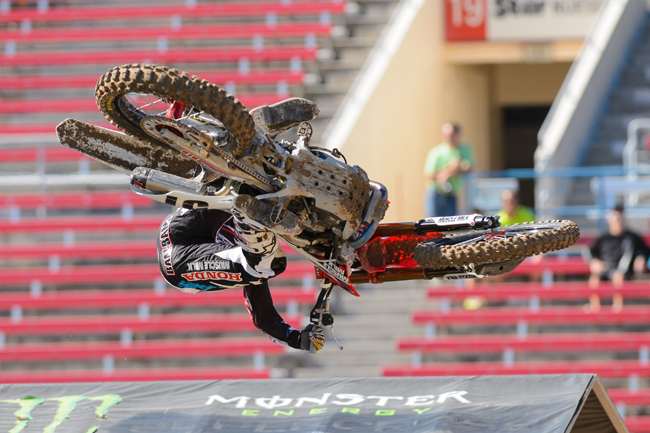 Now of course this was just Friday night and I didn’t think he was going to win but man did he look good. The series of sand rollers before the section where you went into the stands were just getting obliterated by him (maybe he saw the sand, thought of the MXDN and just wanted to punish it?). Bam-Bam was in control, got good starts and although I suppose the RV fans could have a case in saying that the champ was faster (based on his first moto disappearing act), in the end Barcia won and was very deserving.

And just in case you think this Friday night riding thing isn’t an indicator of anything at all, JGR Yamaha’s Justin Brayton went down on the landing to the finish line on lap two or three and it was a strange crash. I was sitting next to his team manager Jeremy Albrecht at the time and Albrecht was just asking himself over and over “What happened?” and “How did he crash there?” And then Brayton went on to have a terrible MEC- just saying.

If you’re a Villopoto fan or Kawasaki management, you had to be relived a bit at Villopoto’s MEC. Yes he crashed out in the second moto and called it a night early but he won the first race going away and looked as good as ever in his first race since ACL reconstruction. He was fast and aggressive out there as he appeared to be pushing extremely hard in the first main to pull out a nice sized lead. We’ve got a ways to go before A1 but right now in my eyes he’s the favorite to repeat again based on his MEC ride.

The track at the MEC was cool as was the split-start, the Joker Lane, the part that went into the stands and the format as well. Everything that Feld did was pretty good and I hope that they take a long hard look at everything for possible inclusion into supercross. 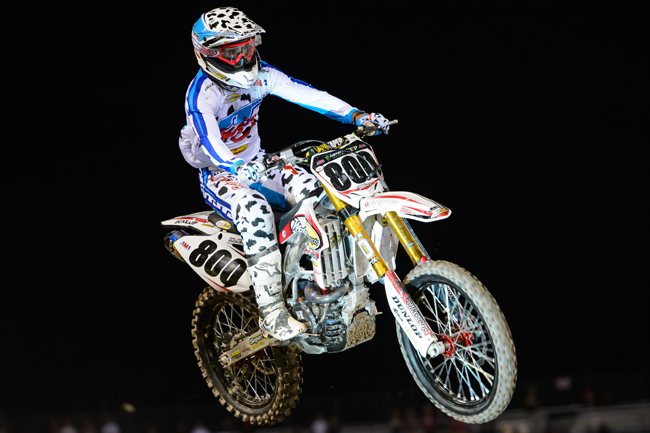 Rumors in the pits have TLD Honda’s Travis Baker switching to Valli Yamaha (who broke away from Star Yamaha for 2013) and maybe Brett Metcalfe as well for the outdoors once his wrist heals. Metty’s got to go in and have another surgery on the wrist that he broke this summer while out testing for Suzuki.

Jimmy Albertson is working on putting something together on his own for 2013 or possibly with the Ti-Lube team. Also rumored is FMX legend Mike Metzger starting his own team on KTM’s with Chris Blose riding for him. Motoconcepts Racing is said to have Gavin Faith (who’s down under that the moment) riding for them in the east 250 region.

Speaking of Motoconcepts, they debuted a new look for their bikes at the MEC and Mike Alessi had a so-so first moto but pretty good second moto (passing back and forth with Barcia) and was on his way to a good third moto before crashing. The Suzuki of Alessi was also mostly white with red accents, which is a completely different look from the all-black look in 2012. And I’m no fashion expert but I liked it. Look for a name change for the MCR team as well for the 2013 season as they look to promote different lines of their company. Ryan Dungey had a couple of shifting issues in the first two mains when he made contact with a tuff block and bent the shifter around. This forced Dungey to be forced to shift with his hand in the air at certain points which is incredible when you think about it and look at the pictures of Ryan doing that. Some serious balls right there and you have to admire RD for that.

The other RD at KTM (Roger DeCoster) was interviewed during the race and mentioned that it’s Dungey’s responsibility to make sure that doesn’t happen to the bike and the internet and my Twitter exploded.

People were coming down on Roger for not taking blame for the shifter bending but really what should he have said? It was Dungey who got tangled up with the Tuff blocks and it’s Dungey that has to be more careful with that sort of stuff.

Roger and his team can only do so much and one of the things that DeCoster should be admired for is telling the truth. He’s a great interview most of the time as he just lays it out there good and bad. I have no issues with what Roger said, sometimes in this sport the riders themselves have to stand up and take responsibility for their riding. Not saying that Ryan Dungey didn’t- he probably did- but just saying that any criticism of DeCoster is out of line in my opinion.