Every year we see 250 racers jump to the 450 class and sometimes, some of them are superstars right off the bat ala Jeremy McGrath or Chad Reed, while other times, guys like Ryan Villopoto and Ricky Carmichael take a year to figure it out before racking up wins. Still others, like Ivan Tedesco and Nathan Ramsey, make the jump and become solid pros but never reach the heights of greatness that many predicted.

So as always, the rise through the ranks starts again in 2013 with a couple of guys that appear, like so many others through the years, like they’re going to be able to take that next step up but, like so many, there are questions.

Honda Muscle Milk’s Justin Barcia is one of those riders that we’re all watching. Barcia, the two-time 250SX champion, is going into his first season in the 450 class for the factory Honda team that has been keeping tabs on him from when he rode 80s for the red guys, through the GEICO Honda guys and now, onto the big team.

Barcia’s got the pedigree looking back to when he debuted at his first pro race at Glen Helen when he led the most laps in the 250 Class that day. Barcia’s got the skills, the bike, the team to break through but right now, the depth of the 450 class is maybe the best it’s been in years.

You have three two-time SX champions in Chad Reed, James Stewart and Ryan Villopoto as well as a past champion in Ryan Dungey. The past seven years of champions lining up week to week. These four will take the majority of podiums in 2013 barring injury but the interesting thing will be to see who can get up there, it’s been shown that it’s not easy. Trey Canard has been in there a bit but injuries have held him back and Kevin Windham can’t be written off for a win if everything is aligned. Justin Barcia will be one to watch fulltime in the 450 class for 2013. Image: Simon Cudby.

The one thing that I think may tip the scales in Justin’s favor is the attitude he’s got. This guy doesn’t care one bit about making friends out there on the track nor is he intimidated by the big names. Barcia’s acquired the nickname ‘Bam-Bam’ for a reason. This is a racer that, in 2010, had to called into a meeting with Honda’s Erik Kehoe who told him to just calm down, that he needs some friends out there because Barcia was just blowing up his fellow riders in practice and heat races! He’s aggressive, he’s got a ton of skill and he’s looking to step it up.

There may be some crashes from Barcia and there will be no doubt some run-ins with some other racers but in the end, Barcia will figure it out and I predict will be able to get in there and run with the top guys. I’m not calling championships right away but I believe in Barcia to the point where I think he’s the real deal.

The other racer is 2011 250 motocross champion Dean Wilson, who signed up with the Jeff Ward Racing team for 2013 and beyond. Wilson had some serious offers from Red Bull KTM and from JGR Yamaha but in the end decided that he wanted to stay green (even though the factory Kawasaki team couldn’t meet his price, they could meet his machinery demands) so a move to Kawi satellite team with factory machinery was in the cards.

Wilson should be by extension, a third member of factory Kawi and can lean on those guys for help. Of course the Jeff Ward Racing team are no slouches and they can also help to try and get Wilson the bike he wanted. 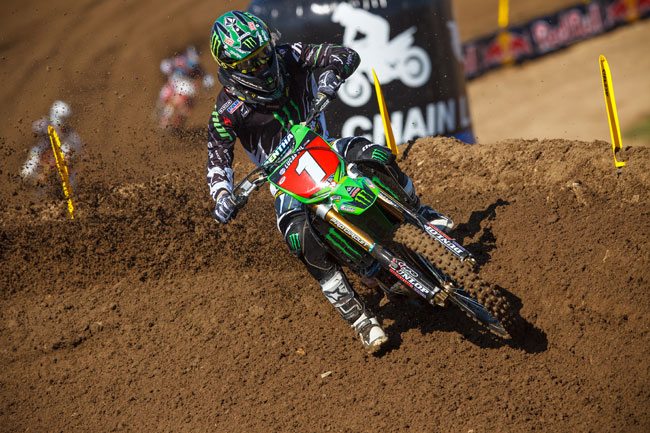 Dean Wilson will ride for Jeff Ward Racing on a Kawasaki next season. Image: Simon Cudby.

A couple of things are going against Wilson right from the start. One is that, despite being inside the top 10 in career 250SX (125) wins, he’s got no championships to show for it. In three years of racing supercross, Wilson has shown great speed but injuries and the speed of others have surprisingly shut him out of getting an indoor title.

Wilson does have an outdoor title to his credit and that’s something that Barcia can’t boast of. As well, Wilson is coming off of double shoulder surgery (one of which kept him from racing the motocross series this summer) and is just now getting back to riding. He’s got a bit of a steep curve and Anaheim 1 will be his first race on the 450 so it’s expected that considering all things, he’ll probably get off to a bit of a slower start.

Dean’s a bigger guy with long legs, he can definitely handle the 450 and adapt to the whoops as well. And he’s done the right things off the track as well in moving to Florida and starting his career off riding with Chad Reed, who he’s had a friendship with for a while now.

Wilson will be able to shadow Reed on and off the track to see how a veteran handles himself. It’s an invaluable resource for Dean and should help him out immensely. Of course, it’s pretty tough to see two alpha-dogs like Wilson and Reed co-existing that long as they battle for positions out there but hey, who knows?

All in all, Barcia and Wilson should add to an already exciting 450 class and it’s going to be interesting to watch both guys and their adaption to the class. And just to add to the excitement, neither guy has a lot of love for each other as well and they’re sure to end up at some point racing each other. I’m already excited for A1, how about you?