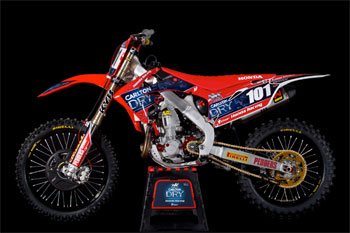 Link International, the official Pirelli Motorcycle Tyre importer in Australia, are offering riders a chance to win Ben Townley’s Honda CRF450 Supercross race bike worth $20,000 when they purchase Pirelli tyres exclusively though Honda dealers around Australia in October and November.

To enter, customers only need to in 25 words or less tell them why, ‘Pirelli tyres are the only tyres worth riding…’ on the entry form, attach proof of purchase and then submit the entry form in store.

“Our partnership with the Carlton Dry Thor Honda Racing team has already seen success this year with the MX Nationals MX2 Championship win, and we are excited to see the return of a champion such as Ben Townley to race the Australian Supercross Championship on Pirelli Scorpion MX.”

Yarrive Konsky, managing director of series promoter IEG is pleased with the competition.

“Pirelli are long time supporters of supercross,” Konsky said. “We are proud to have Pirelli as a major sponsor of the 2012 championship. Combined with their investment leveraging their sponsorship by bringing consumers a money can’t buy opportunity to win Ben Townley’s Honda CRF450R race bike, it is great support of supercross in Australia.”

To enter, participants must meet the following criteria:
a. Buy any Pirelli off road tyre from participating Honda dealers during the promotional period
b. On the entry form provided answer in 25 words or less, ‘Why Pirelli tyres are the only tyres worth riding…’
c. Submit their fully completed entry form, including answer, name, email address and mobile number into the entry box provided in the Honda dealer where they purchased their tyre/s from before the promotion closing date.

There is one major prize package awarded to the winner of ‘Win BT101’s Supercross Bike Competition 2012 valued at up to AU$20,000. Prize includes a factory-prepared Honda CRF450 Supercross bike, as per the one raced by Ben Townley in the 2012 Australian Supercross Championship. The Promoter is Full Throttle Sports Pty Ltd.