Speculation has been mounting for weeks that Chad Reed is considering racing at least a couple of Terex Australian Supercross Championship rounds, and yesterday via the TwoTwo Motorsports Page on Facebook, we had the first real serious indicator that he’ll likely be behind the gates.

As soon as the Australian Supercross Championships Page on Facebook reaches 10,000 Likes then Reed will be confirmed, and considering the page has almost doubled in fans since yesterday afternoon, it’s a very real possibility.

I had a chance to chat with Chad himself this morning as he prepares for next weekend’s Monster Energy Cup, however he was remaining tight-lipped on his supercross prospects. What we can expect is for him to race at Phillip Island alongside the MotoGP round and then go on from there.

If the deal is struck, Reed will be the first in Australia to debut the highly anticipated 2013 Honda CRF450R and it will also mark his first race since his memorable Honda debut in TeamVodafone colours during 2010. Anything involving Chad Reed is massive in the sport of motocross or supercross, so fingers crossed it goes ahead. 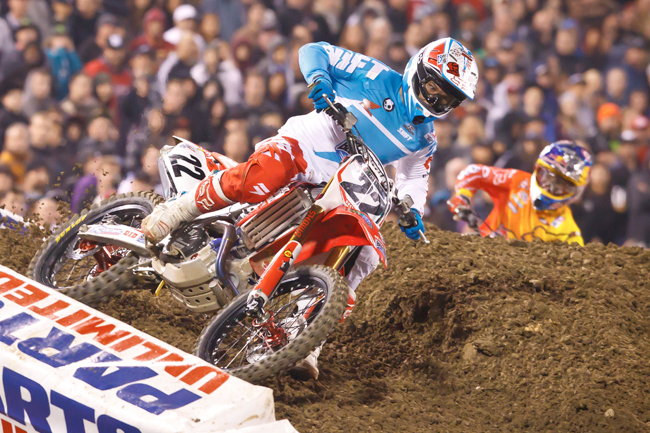 Chad Reed could well be a possible entrant in the 2012 ASX series for atleast one round. Image: Simon Cudby.

How did the deal come together, you may be wondering? Well, there are a couple of very close links between Reed and the Australian Supercross Championships. One is that they both share Fluid PR in their public relations, plus TwoTwo Motorsports has featured as an associate sponsor of Carlton Dry Honda Thor Racing this year.

International Entertainment Group (IEG) managing director Yarrive Konsky is also the owner of Carlton Dry Honda Thor Racing, with that team also using Fluid PR for the past couple of years. There are a lot of ties between all parties, plus the Australian Grand Prix Corporation is understood to have a heavy involvement in securing Chad for that round at least.

In speaking to Chad though, he said it wasn’t yet a done deal by any means, so we’re going to have to wait for an official announcement – hopefully when the series Facebook Page reaches the milestone of 10K. It’s a genius decision by IEG in a bid to increase their fan base. If you haven’t Liked it yet, make sure you do!

What Reedy did mention was just how impressed he’s been with IEG’s development of the series in its early stages. He’s a fan of having regional events such as Dubbo, plus is a big believer in holding supercross alongside key motorsport events such as the Australian Motorcycle Grand Prix or even the Gold Coast 600 V8 Supercars race that takes place during October.

While the sport has to stand on its own two feet and does so very well during the MX Nationals, piggybacking off other major events will align the sport with bluechip brands and also cast our nation’s best in action at a place motorsport enthusiasts are already at.

By the way, great news this week is that Computime will be the timing source of Australian Supercross, meaning that we’ll benefit from live timing during the 2012 series. The National Arenacross series will also be handled by Computime, so we’re in for a smooth season on the timing front.

Another great addition to the 2012 ASX series is the introduction of a virtual track map for each round, giving the riders and fans a detailed preview of what they will be presented with on race day, check out the Dubbo 3D track map below.

The other big news to break yesterday afternoon was that of Matt Moss switching from JDR Motorex KTM back to Motul Pirelli Suzuki for the supercross series. Moss had been testing a 2013 450 SX-F and told MotoOnline recently that he was happy with the bike, however an announcement is pending that he’s switched to Suzuki in the Pro Open class alongside Todd Waters.

What that move has done is triggered speculation that Waters will indeed head to KTM in 2013, with Moss’ supercross deal extending through into next season in place of Waters. As we’ve said on numerous occasions over recent weeks, Waters is the key to the silly season and once he’s locked in then we can expect much more to fall into place relatively quickly.

Where that leaves KTM for the supercross series, we’re not sure. Josh Cachia and Ryan Marmont will no doubt be strong campaigners in the Lites, however Moss was their bright hope in the Opens. At this stage we’re likely to see the brand divert their 450 attention to their new in-house ‘super team’ for 2013.

In a brief conversation with Waters this morning, he admitted he’s running out of time while preparing for supercross, but feels relatively good on the 2013 RM-Z450 considering he’s been focusing on riding outdoors in the sand during the past few weeks for the Motocross of Nations. 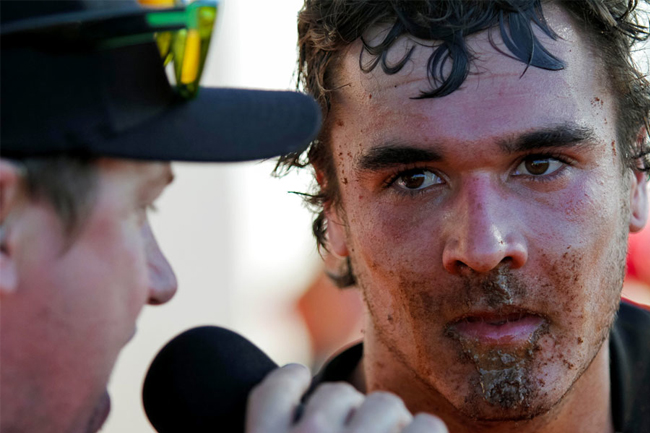 All signs are pointing to a KTM move for Todd Waters with the recent movements of Matt Moss, things are getting interesting. Image: Simon Makker/Makkreative.com.

CDR Yamaha’s Lawson Bopping checked in yesterday with his 70’s Say column right here on MotoOnline, and he confirmed that the team is up in New South Wales this week completing final testing with him and new teammate Dan McCoy. Something tells me that McCoy will be a factor with the might of CDR behind him in SX.

One rider who is flying in under the radar is Ford Dale, who has been bumped up to the Pro Open class at Carlton Dry Honda. The word coming out of multiple sources in Queensland is that he’s been devastatingly quick during testing and will contend for wins.

A major factor for Dale will be whether or not Ben Townley is cleared to race. The Kiwi called quickly this morning while he was at the doctors awaiting final clearance and we should know this afternoon whether or not he’ll be racing at Dubbo this weekend.

We’re just three sleeps away now and it’s really gained momentum recently, so we can’t wait to see what IEG has come up with for the new-look Australian Supercross Championships and we’ll cover it all season long on MotoOnline.