MotoOnline.com.au reflects on the Top 10 topics of the 2012 Motocross of Nations event.

The 2012 FIM Monster Energy Motocross of Nations went down as one of the most action packed and eventful we have seen in years. Geoff Meyer put together his Top 10 list of MXoN 2012 standouts, check it out. 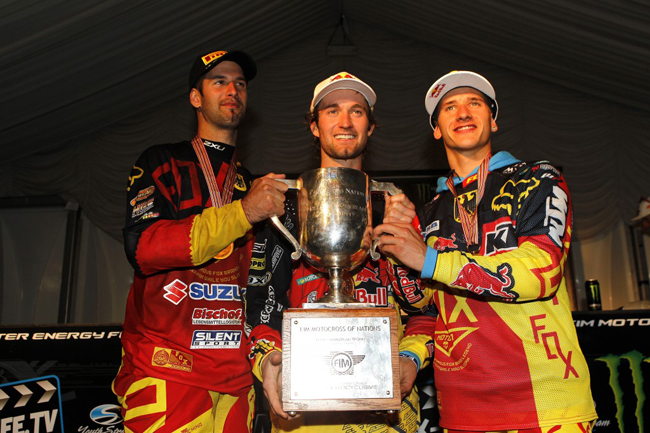 Team Germany were very impressive in the sands of Lommel, bringing home the win and putting a stop to the American's winning streak.

Team Germany
Could there be any other team that deserve to be number one. Led by Ken Roczen who struggled in the warm conditions of American AMA racing must have been delighted with the 18 degrees in Lommel. Finally able to show his 2011 form and once again prove who the fastest rider in the world is in the MX2 class. His team mates Max Nagl and Marcus Schiffer did Germany proud and both were consistent, without any mistakes.

Team USA
I know they didn’t finish second, but the way they talked about the Grand Prix riders, with huge respect was pleasing. When the riders came into the press room, heads down and looking miserable I wondered if they were acting like good losers, but they proved me wrong with their positive comments and respectful actions. We all know they will come out swinging in 2013 in Germany and nobody would bet against them taking the MXoN back home in 12 months time.

Antonio Cairoli
He wasn’t the fastest in the world yesterday, but he was the guy who went 1-1 and for that the Italian legend deserves huge respect. After so much disappointment at this event it was so nice to see him dancing around at the end of the final moto. Cairoli is all class and in my opinion Europe and the rest of the world have every right to call him the fastest rider in the world at the moment. 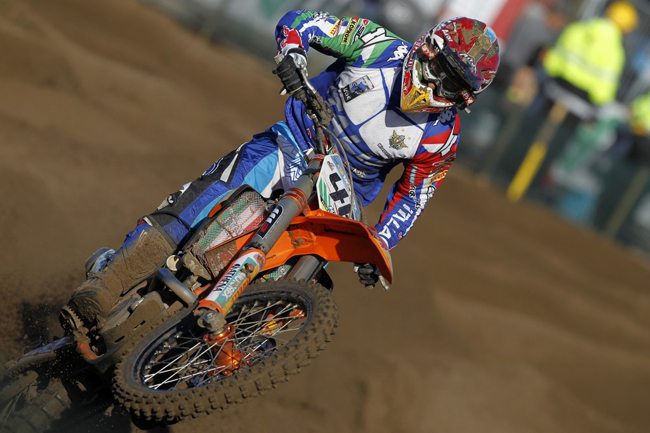 Antonio Cairoli may cemented himself once again as a contender for the title of world's fastest rider.

Justin Barcia
Boom Boom was impressive. After his Saturday crash many wondered if he would have had the mental strength to stay with the GP riders, but he did brilliant and really deserved better than the results he had. Battling for a top three place in his opening moto before a coming together with Ken De Dycker cost him a great deal of points and then a fighting third behind Cairoli and Herlings in the final moto of the day. Respect Mr. Barcia.

The organization
What a magnificent event. Many were concerned it might be over crowded in Lommel, and while it will always be a place with difficulty seeing the whole circuit, Eric Geboers and his crew really impressed with grandstands, bigger hill area’s and in general everything ran perfectly. As for Geboers, he was everywhere, making sure the Prince of Belgium was taken care of, coming into the press room with important information about the weekend, cleaning up rubbish, whatever was needed Geboers was doing it.

The Crowd
Massive, multicultural, passionate, air horns, crowd friendly beer drinkers, noisy, polite and so many other things can be described for this crowd. Sitting in the sun with magnificent racing is a great way to spend a Sunday and it was clear the crowd were into it. Justin Barcia rose to the occasion and put in a mature ride on the 450.

Josh Coppins
The great kiwi rider ended his career in the same way he started it. Head down and tail up with his heart on his sleeve. Josh Coppins is everything the motocross world is about and his respect for his rivals, fans and sponsors is legendary. He might go back to New Zealand without a World Motocross Championship, but what he does have is the respect of the motocross public.

Youthstream
Announcements of a MXoN in USA in 2015, same day coverage of the MXoN on CBS in America, German Grand Prix at the amazing Lausitzring in 2013, building a future for Belgium with a strong relationship with the Belgian Grand Prix and Belgian Motocross Championship promoter. Call me positive, but anyone can see that Youthstream have brought our sport to a better place.

Media
Hundreds and hundreds of people from Australia, Japan, South African, America, China, India, Thailand, Russia, New Zealand and most parts of Europe worked all weekend long to bring our sport to the world. Led by Marionna (the princess of the press room) the Motocross of Nations had more coverage than ever before.