This weekend the most prestigious race of the year takes off in Lommel, Belgium with the Motocross des Nations. Countries from all over the world meet once a year to decide motocross supremacy and this year, more than ever since Team USA started this recent win streak, it’s going to be a real test for the red, white and blue to hold onto the Peter Chamberlain Cup given to the country with the lowest scores over three motos with one throwaway.

Lommel’s a deep sand track, like nothing the USA guys have ridden before and it’s going to test the riders and machines in every which way. The European nations all ride the soft stuff pretty good and the USA has to hope that its depth of its team can be good enough to win because in my eyes, they can’t claim to have the fastest one or two riders out of everyone like in usual years.

Ryan Dungey, Justin Barcia and Blake Baggett are all among the world’s best but I wouldn’t be surprised to see if at the end of the weekend, the USA guys don’t take a class win. The Europeans are that good!

I do think that USA will win just because all three riders can be top three in their class each time out and I’m not sure there’s any team out there that can boast as solid of a team one through three that USA can. In this event, consistency counts for everything. It’s been nine years since USA lost the Motocross des Nations and that wasn’t a very nice day for anyone involved. 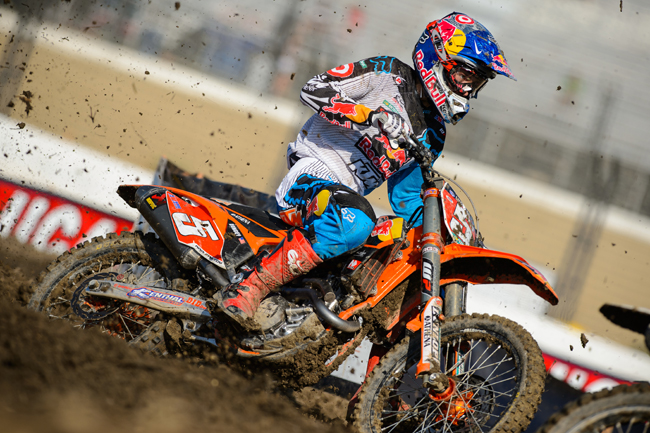 Ryan Dungey will lead his team through the sands of Lommel. Image: Simon Cudby.

How do I know?
Because I was a mechanic for Tim Ferry on Team USA that year. Yep, I was a member of the last Team USA to lose and trust me, it wasn’t much fun. One thing that I’m continually amazed at each time I come over here to cover the MXDN as a journalist is the amount of support USA has for this race.

When I went, it was a crew of about seven and off the top of my head, this year’s race should total about 14. And I’m talking people who are just involved with the machines IE- mechanics, managers, motor and suspension guys and helpers. And I guarantee you I’m forgetting some. The USA guys have really stepped up their efforts since I was on the team.

And coincidently, that 2003 MXDN that we lost was in Belgium and for the first time since that race, it’s back in Belgium. And Team Belgium beat us that year and once again, the Belgians are the strongest competitors to USA in 2013. If you believe in that sort of thing, the omens aren’t looking good for America.

My rider Tim Ferry crashed in the second lap of practice and tore some thumb ligaments, which bothered him all day. It was a goofy one-moto format as well and the lead rider on the team, Ricky Carmichael, did his part but crushing the motos on his CR250 two-stroke versus Stefan Everts on the 450F. 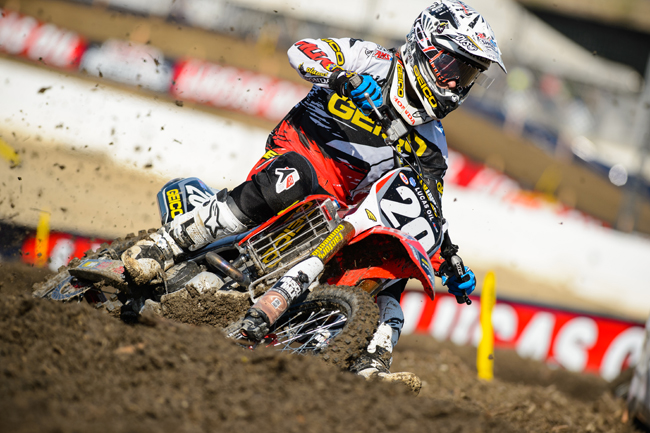 Consistency will be key to complete the task at hand for Team USA. Image: Simon Cudby.

But Ferry crashed a few times, hurt his thumb some more (he eventually needed surgery for it) and ended up eighth in the moto. Our third rider, Ryan Hughes, broke his chain and DNF’d. It was a crushing blow and packing up at the end of the day was not fun. There wasn’t much said by anyone really. We went there as the “rockstars” and the favored ones and we didn’t get it done.

It really wasn’t anyone’s fault- it’s just racing. If we ran the race ten times over ten different days, I believe that we had the best team but that’s not the MXDN. It’s a one-day deal and the moto gods are sometimes on your side, sometimes they’re not. For more on this see world champion Antonio Cairoli who is perpetually cursed at this event.

I do look back on my time as a Team USA mechanic fondly but it was a lot of work for a second. And it’s not something that I think about how we came up short but still got second. Nope, it was first or nothing for Team USA back then and it’s the same now.

I know the pressure that the riders and team feels even though it’s thousands of miles away. The racers before you that dominated this event wearing the stars and stripes are there for you to think about and to try and measure up to. We didn’t do it in 2003 and frankly, it sucked.

So good luck to Team USA this weekend, it’s a hell of a race and they’re going to be in tough to defend the title. If they manage to pull it off (and I think they will) it’s going to one of those things where they really earned it because there is so much going against them.

I know this all too well.