Take an all-access look at your sport every Wednesday on MotoOnline, presented by Oakley

We’re within a fortnight of the inaugural Australian Supercross Championship run by International Entertainment Group, the four-round series that kicks off at Dubbo in New South Wales on Saturday, 13 October.

After a quiet start and reasonably late announcement regarding the series structure in 2012, the team at IEG looks to be hard at work and has a heap of unique initiatives planned for this year.

This week they unveiled a brand new championship ring to be awarded to the champions, which has proven popular overseas (especially in the US) for a variety of sports. There are also plans for Monster Trucks at the events (love them or hate them!), fireworks and dancing promo models from what we have heard.

IEG has also previously announced its plans for the mascot-type Throttle Jockeys and their accompanying arena, which will be a place for children to get their taste of two-wheel action at any given event. It’s experiences like these that could help the sport grow in years to come.

On track we’ve seen that IEG will revert the formats to traditional, which is in heavy favour for all the riders that I have spoken to. Add in the FMX displays lined up and it’s shaping up to be an entertaining series for fans who get behind it.

The industry is getting behind the series as well, including the major manufacturers and many of the local distributors. IEG released the front plate artwork this week, with Carlton Dry looking as though it’s the presenting sponsor of Pro Open, Terex in Pro Lites and Unit in the Under 19s. The brand new championship ring to be awarded to the ASX champions was released this week.

As far as the rider line-ups go, Carlton Dry Honda Thor Racing is going to undergo some 11th hour changes. Brad Anderson revealed via social networking this week that he’s heading home to race the Weston Beach Race, which is the same weekend as Dubbo.

With Anderson heading home for that weekend and all of 2013 since he’s signed for Kawasaki in the UK, that leaves Honda to source another Open rider. Ben Townley has been riding supercross and will more than likely be racing, and we are hearing that Gavin Faith will return in the Lites for the team once again (remember, the American finished second last year).

That leaves the question whether Ford Dale will partner Faith in the Lites, or will he take over the CRF450R vacated by Anderson? Either way, Townley and Dale have been confirmed as Honda’s 450 riders for the full season next year. Expect an announcement on their supercross plans this week.

Victorian Cheyne Boyd was spotted during filming for an upcoming Shift film, riding a 450 in DPH Motorsport Honda colours. A little extra research has confirmed that Boyd will ride Pro Open in supercross, making for yet another contender in the premier class.

Yamaha has officially confirmed its supercross line-up with a total of seven factory-supported riders across three classes. Lawson Bopping and Daniel McCoy will spearhead CDR Yamaha’s efforts in Pro Open, while it’s been revealed that Luke Styke will be joined by Luke Clout at Serco Yamaha Metal Mulisha Racing in the Lites.

Clout was super-impressive in his late addition to the outdoors in MXD, dominating the Moree round on debut. He’s ridden his YZ250F a few times now, but testing in Queensland this week will be where he makes major steps forward. After spending a lot of time in the US over the past two years, he’s going to be interesting to watch and must be pinching himself right about now.

The bike that Clout will be riding is that of Kirk Gibbs, who will sit out the supercross series following his mammoth crash at Coolum’s MX Nationals finale. 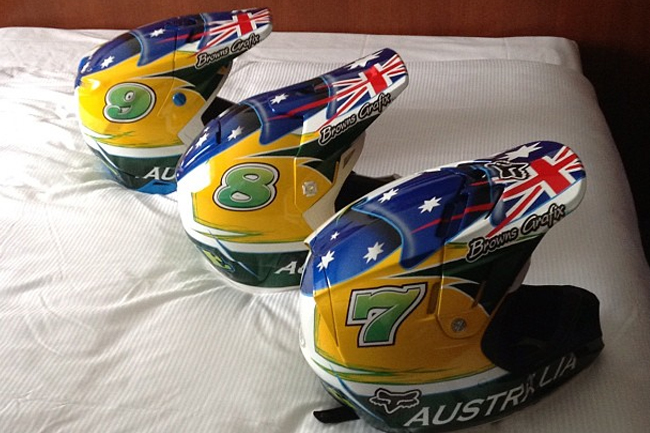 Completing Yamaha’s line-up for supercross is the GYTR Yamaha team in Under 19s, with junior standout Joel Dinsdale signed alongside team regulars Sam Martin and Wade Hunter. Dinsdale is another star of the future to keep an eye on, but he has the junior nationals at Coolum coming up before the ASX series.

One more major switch between the outdoors and supercross is Mitch Norris, recently confirmed for Craig Anderson’s Berry Sweet/Lucas Oil/Yamaha team in the Pro Lites. Norris rode for Axis Motorsports on a Kawasaki in MXD during the nationals, but he’s filling in for the injured Luke Arbon.

Of course three of Australia’s best are in Belgium right now preparing for their Motocross of Nations debut at Lommel. Todd Waters (MX3), Lawson Bopping (MX1) and Styke (MX2) are preparing to take on the best in the world at one of the toughest venues on the planet, and we can’t wait to see how they fare.

All have factory support direct from Europe through Suzuki (Waters) and Yamaha (Bopping and Styke), so the week will be a big eye opener for all three. It’s not ideal for their supercross preparation, but then again, who wouldn’t want to represent Australia at the MXoN?

The trio unveiled their MXoN helmets painted by Browns Grafix yesterday, featuring the lowest numbers Australia has ever earned in the race thanks to the efforts of Chad Reed, Brett Metcalfe and Matt Moss last year. Third place overall in 2011 means that Waters, Bopping and Styke will be sporting single digits this season.

Speaking of Reed, he’s been confirmed for the Monster Energy Cup in Las Vegas on 20 October, which is the week between the Dubbo and Phillip Island round of Australian Supercross. It’s a long shot, but if you get a minute send some inspiration via @CRtwotwo on Twitter or the TwoTwo Motorsports page to get him to come to a round or two of ASX. We all know how much he loves MotoGP!

That’s all we have for this week, but stop by tomorrow for all the latest from the US in The Mathes Report, presented by FOX. It’s a big week in motocross, that is for sure!