Suzuki’s RM-Z450 is one of those bikes that you watch race throughout the year and just know that it is a solid package. It’s a bike that has proven time and time again to be competitive in the hands of the best, whether it be in the US, Europe or right here in Australia.

That fact was again proven in Australian Motocross when Todd Waters rejuvenated his young career as part of the Motul Pireli Suzuki team in the MX Nationals, finishing a fighting second while teammate Cody Cooper was directly behind him in third.

Waters was spectacular this year and obviously clicked with the bike and team immediately, picking up nine podiums in 10 rounds as he took the title down to the wire. At 21, we witnessed a Waters that we hadn’t seen previously on such a consistent basis.

Over in the US it was James Stewart who proved the bike’s potential upon his mid-season switch, winning American Motocross rounds before ultimately crashing out of contention. Previously, in the not too distant past, we’ve seen the likes of Ryan Dungey and Aussie Chad Reed win titles aboard the RM-Z450 as part of Suzuki.

For 2013 Suzuki is releasing its fifth generation RM-Z450, fuel-injected in all its might and no doubt benefiting from all the data generated from its professional race teams.

The full technical rundown is below in detail, however following a day of action at the Australian press launch by Suzuki, the new model’s potential is once again clear that the manufacturer’s research and development has paid dividends.

Maitland, near Newcastle in New South Wales, played host to the national introduction, and the club prepped the track well, ripped and watered for a full day of moto bliss. It made for a great test ground, because in the morning it progressively became loamier, before the afternoon sunshine and many laps from the testers turned the track hard pack for the most part.

The handling characteristics of the RM-Z450 are familiar, but refined. It turns better with more balance than the previous model. It holds its line well, has good feedback through the suspension stroke, which in turn works a treat when you experiment with the adjustability. Pushing into ruts and accelerating through them comes natural, aided by the balance of the bike’s chassis.

Traction off the turns is one of the more impressive aspects of the bike, because it hooks up and drives forward with the best of them. What that’s especially good for is jumping directly out of the turns, or simply getting on the gas toward the next straight. 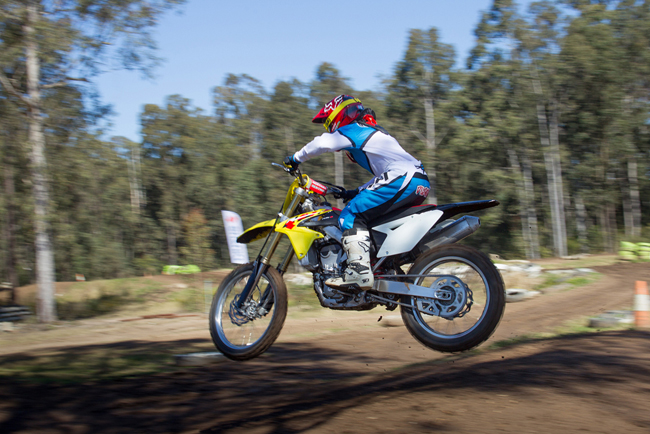 It did have a tendency to headshake for me as the track became rougher, causing me to grip the bike tighter with both my arms and legs, but further time to set the bike up would quickly solve that issue.

Ergonomically the bike is thin, but has plenty of gripping areas, and it’s comfortable for pretty much all types of riders (as most are these days). The Renthal Fatbar is also a pretty nice all-round handlebar for stock, so what we saw was pretty much everybody feeling relatively comfortable from the outset. All in all, it has a light feel that’s ultimately very maneuverable.

The engine starts easy enough hot or cold, although it does take a few goes before you get a natural feeling with the kickstart. Once you get a feel for it though, there’s no problem whatsoever.

Throttle response is silky smooth and it has a broad power range. What you feel is a bike that has a useable spread of power, but has that extra step for those who have the ability to make the most of it. That’s what makes this bike an all-round weapon.

The power seems a little more explosive that what I remembered from the KTM launch a few weeks earlier, reminding me in some ways of the torquey motor of the Yamaha that just keeps on pulling. It has plenty there for you to use and a couple of couplers to adjust the fuel settings give you an option between power curves. The RM-Z450 handled the technical sections of the Maitland circuit with ease and confidence. Image: Shayne Rice.

It’s shaping up to be a successful season of racing for the 2013 Suzuki RM-Z450, and while it’s flown beneath the radar in comparison to some of its rivals, don’t be surprised to see this bike rated amongst the best as the season progresses.

Technical Information:
The 2013 model Suzuki RM-Z450 is the fifth generation of the brand’s 450 four-stroke motocross model, featuring upgrades across the board in a bid to gain supremacy in the premier class.

The RM-Z450′s 449cc, four-stroke, liquid cooled, DOHC, 4-valve, fuel-injected engine has been overhauled and refined for a smoother, quicker throttle response. The aim is to increase acceleration and broaden the mid-range power and torque.

Developed and tested by factory race teams, the all-new piston is 13 percent lighter and the piston pin has a Diamond-Like Carbon (DLC) surface treatment, which increases durability and lowers friction. A new intake camshaft and updated electronics have been fitted to be in harmony with the new engine internals. To fine-tune fuel preferences to suit track conditions, two couplers are enclosed allowing the rider to easily change fuel settings between three fuel maps (lean, standard and rich) with the rich-lean coupler relocated for easier access and change without tools.

The RM-Z450′s all-new frame is 91 grams lighter with changes to the frame head, rails and down tube and a refined seat rail for rigidity and balance, contributing to increased stability and better handling.

The RM-Z450 is now equipped with an all-new race-bred 48mm Showa Separate Function Fork containing the spring on the right leg, while the left leg incorporates the cartridge assembly to manage damping with the result being less friction, increased damping and an overall weight saving.

The bike also comes with all-new graphics with a black and yellow livery, plus it has new two-tone radiator shrouds. For a complete technical specification rundown, visit www.suzuki.com.au.