One person who we follow pretty closely when information is available is Josh Strang, the talented Aussie who’s currently based in Southern California contesting the WORCS series for RPM KTM.

After winning the GNCC title on the east coast in 2010, Strang suffered a tough title defence last year with a broken leg to end the year, and then his trusty factory Suzuki team folded thanks to the financial crisis (Suzuki in the US also downsized both its motocross and superbike teams to match).

So that left Strang scrambling for a seat, eventually ending up on the KTM support team to race on the west coast, but still fighting to regain 100 percent fitness when the season started.

After a third place podium with 4-2 results at last weekend’s WORCS season finale at Taft, CA, Strang concluded the season in seventh. On paper it’s not what he was looking for, but with limited support and a string of top five finishes to round out the year, he can be happy with his late-season surge. 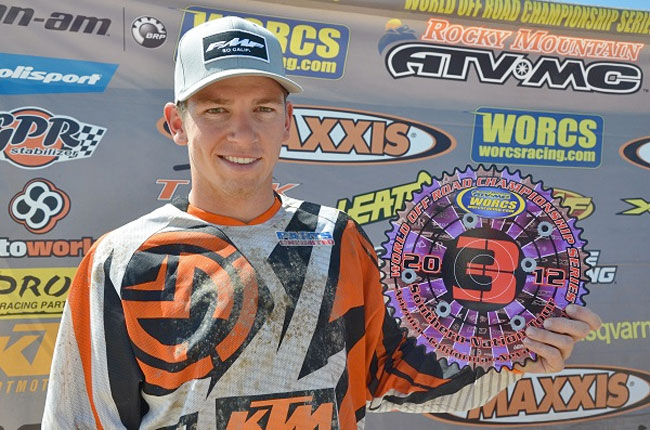 Josh Strang landed on the podium at the final round of the WORCS series last weekend. Image: WORCS.

I was able to speak to Strang this morning on Facebook for a while and hit him up with a heap of questions (sorry mate!), to find out a little more about where he expects his career to go in the next year or so.

As a former champion of the GNCC, Strang’s ultimate aim is to get a seat back in that series. It’s the one he started in when moving to the US and has unfinished business in some ways after a frustrating campaign in 2011.

Plans to race a number of GNCC races this year only resulted in one, where he finished sixth at the John Penton round in Ohio.

Strang was also initially expected to ride a number of Endurocross events, but instead decided to focus on his bike settings for the WORCS series.

Again, his injury from last year delayed his momentum at the start of the season, but he eventually got back on track and looks set for a positive 2013 season as long as he has the right ride to prove his worth.

The next event for Strang is the upcoming International Six Days Enduro (ISDE) in Germany on 24-29 September. He’ll be part of Team Australia alongside a host of AORC contenders, and looks forward to the event since he hasn’t been able to race it in recent years.

Strang is keen to do a number of races in Australia next season if the opportunity permits, but admits that his ambition remains in the US fulltime since we all know too well that if he leaves now, it’s extremely hard to get back on a competitive team.

It’s fitting then that KTM Australia general manager Jeff Leisk has been instrumental in organising a bike for Strang to ride at the ISDE this month.

You never know, a good result there may just further increase their relations and we could see Strang’s wishes of a few guest AORC rides granted next season. I, for one, would definitely be keen to see that!