One race left this year in the American Motocross series and although the 450 title is long since wrapped up by KTM’s Ryan Dungey, the 250 series is unexpectedly heating up with Eli Tomac’s dominating 1-1 at Steel City.

A series that we once thought was Kawasaki’s Blake Baggett’s to walk away with, the BB Gun now has some heat on him. Fourteen points is still a nice lead for Blake, but with Tomac stepping up to a new level lately, Baggett’s got to make sure this weekend that there’s no missteps at the brand new Lake Elsinore track.

Let’s take a look at what we think we’re going to see this weekend in the 250 Class with the guys in it and things that could be a factor in determining who your 2012 250 National Motocross Champion is.

The track is going to play into things. The facility is brand new for this year and in fact, resembles nothing like the old Mad Max-ish Beyond the Thunderdome facility it used to. The crew there installed fencing, a brand new layout and the typical concrete soil has been mulched up with various things to try and inject as much loam into a Southern California track as you can.

I believe that Baggett, who’s ridden at the track before a bit for practice days and is from California, has the upper hand here. If there’s a home track advantage at all (and it’s very slight) it would go to Baggett. No matter what the track crew does, by the end of the day it will be hard packed and rutty which is something Baggett’s used to.

The layout is mostly flat with some man-made hills and some jumps thrown in. It’s not exactly motocross mecca but by all accounts, it’s going to be a decent track. 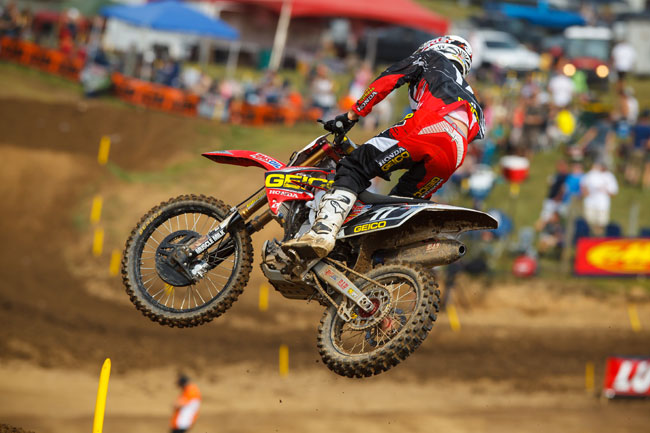 Eli Tomac has been on a roll of late. Can he make up the 14-point gap to Baggett? Image: Simon Cudby.

Tomac’s got to go 1-1. He’s 14 points back and needs a lot of help to win this title and really the best way to make this happen would be to go out there and put on a clinic. Eli’s won four out of the last six motos (would’ve been five if he hadn’t hit a tree at Southwick) and has really been kicking ass.

If Tomac goes 1-1, Baggett would need to go 4-4 to lose. A 3-4 or any variation of that keeps the number one plate with the Pro Circuit team. For Tomac to even have a chance, he’s got to uphold his end of the deal and keep on keeping on.

It seems that no matter where any of the big four (Baggett, Justin Barcia, Ken Roczen or Tomac) start, they can finish in the top four although Marvin Musquin has been very good the last couple of races. The starts definitely do matter but really, barring a complete disaster, the top four in the class are the four best riders by far this year.

The temperature is going to be in the triple digits and the track will be rough. Who’s in shape to go two 30-minute motos plus the two laps? Well, for sure both Baggett and Tomac have proven to be in more than good enough shape to stay strong.

Barcia has led the most laps in the class by far but has had a tendency to get passed late in the motos (Steel City, Washougal and Unadilla among others come to mind) so maybe the heat will get to him a bit? Roczen also has struggled at times to hold onto an early moto pace. Just something to keep in mind.

Baggett’s got to get back to his old ways. Look, there’s no doubt that Blake is not the same guy he was early in the season and one has to make a logical conclusion that he’s been riding with the points lead in mind. To see him this weekend get the holeshot and then just go backwards that fast isn’t the Baggett we saw for half the series.

That Blake Baggett seemed to toy with his competitors and turn it on around halfway to pull away with a big lead. Baggett’s got crazy skill on a bike and speed to burn but that’s gone away lately. What he’s got to do is somehow release the worry for the title and ride like he used to at the beginning of the series.

I know that’s not easy to do and I can’t give you an answer as to how to do it but it’s got to happen. Ride around tight and worried about where Tomac is, where you are and that’s when disaster happens. 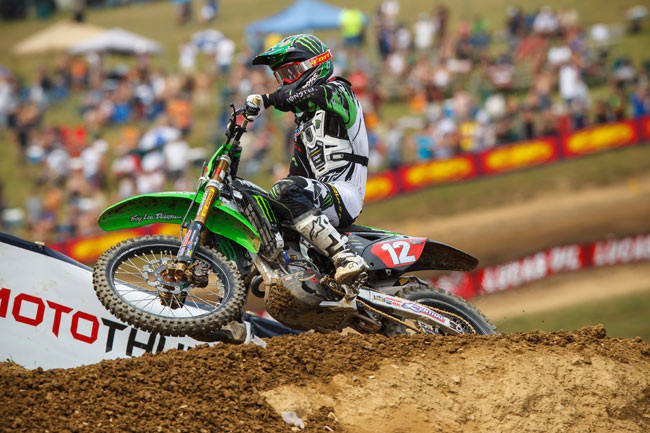 Baggett should have the 'home' advantage come this Saturday at Elsinore. Image: Simon Cudby.

The KTM kids of Ken Roczen and Marvin Musquin are could very much get in the way of this title. Musquin has been getting faster and faster. Early on in the season, he was far off the big four but lately he’s been right there with the guys. Winning the Unadilla national speaks for that.

He’s also been screwed out of an overall podium a few times with scores that most weekends would’ve got him on there. At Steel City he was under the weather and that accounts for the average 5-5 scores. And Roczen, after a mid-season slump, is right back to where he was in the beginning of the year.

Winning his first moto at Unadilla and solid rides at Steel City have him primed to be a podium guy this weekend. Whether Marvin or Ken help out Baggett or Tomac is not easily seen but make no mistake about it, they don’t care who wins this title and have no dog in the fight. Therefore they should affect this title one way or another.

Justin Barcia is only a few points behind Eli Tomac and has the speed to win this national. There won’t be any helping out Tomac by Barcia, he’s got a real chance to win this thing also! So therefore, in the first moto he could easily get in between Tomac and Baggett in one way or another.

The only way this will shape up differently is if Barcia has first moto troubles and is basically out of it. At that point, going into the second moto, Baggett could be faced with a GEICO Honda dual attack. There’s not a lot of love lost between Tomac and Barcia (is there ever with teammates involved in a title with millions at stake?) but I would think that Barcia, ever the Honda company man, would help Eli out by not putting up much resistance to a pass.

That’s it folks, that’s the run down on what is sure to be an interesting and exciting 250 national this weekend here in America – the land of fried foods.