MotoOnline.com.au reflects on the defining moments of rounds six through 10.

As riders and race-teams regroup from one hell of an outdoors season that’d have to go down as one of the best Australia has ever witnessed, MotoOnline takes a moment to reflect on the second half of the championship and relive some of the pivotal moments that made 2012 so special. The MX1 class had many ups during a quality Australian Motocross season. Image: Simon Makker/Makkreative.com.

Bopping ‘s breakthrough
Straight off the six-week mid-season break in the series, CDR’s Lawson Bopping proved his trip to self-funded trip to the USA was worth every penny when he dominated the sandy, super-rough Hervey Bay circuit to claim his maiden MX1 victory. The Canberra kid mastered the rutted track that caught almost every rider out at some stage, and gave CDR Yamaha another round win.

Raging Waters
I wonder how many punny headlines we’re going to see of Todd Waters over the next few years. As the Motul Pirelli Suzuki racer proved he’s currently the fastest Australian in the paddock, we can’t help but get the feeling he’s going to get stronger and stronger from here on out. While Josh Coppins temporarily faltered during the middle part of the season, Waters pounced and claimed race at Murray Bridge and Horsham, before Coppins began holding his own again. 21-year-old Waters charged right through to the end of the season, claiming the round win at Coolum, and setting himself up to be heir to the throne in 2013.

The Appin epic
The Appin round of the series was the standout for both fans and racers alike. Sure the track was one-lined and tough to pass on, but that made the racing that much more intense. A solid crowd poured through the gates, the MacArthur club had prepped the track to perfection, and the racing intensity was the best all season. It’s great to see the clubs stepping it up each year.

Moree madness
In 2011 the penultimate round of the championship at Moree threw all kinds of spanners into the works as everyone jockeyed for position and made a last-ditch effort to better their position. 2012 proved to be just as pivotal, as Luke Styke blew a 30-point lead to effectively lose the MX2 championship, Adam Monea crashed out of the series in spectacular fashion, Coppins held his nerve against a desperate Todd Waters, and the crazy third piece in the love triangle (being Water’s team-mate and a fellow Kiwi), Cody Cooper relished a late-season charge for a series podium. 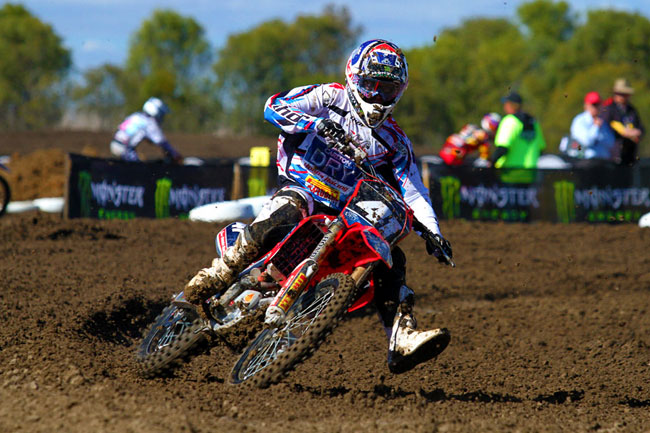 Ford Dale raced to the MX2 title after a surge in the season's second half. Image: Simon Makker/Makkreative.com.

Ford’s focus
They say you win your championship on your bad days. If that’s the case, then Carlton Dry Thor Honda Racing’s Ford Dale truly is the deserved winner of the MX2 title. His consistency throughout the series, (seven podiums from 10 rounds) proved to the be deciding factor as he capitalised on Luke Styke’s horror round at Moree to take a 21-point lead into the final round. Coolum was a nervous time for Dale and he struggled to keep a lid on the pressure that built up, but at the end of the day he finished with a narrow two-point championship lead over Styke. It’s the stuff movies are made out of.

Stykeing out
You can’t help but feel sorry for Serco Metal Mulisha Racing Yamaha’s Luke Styke. After leading the championship from Round 3 (when he overtook his team-mate Kirk Gibbs), Styke was the heavy favourite to win the MX2 title. We can’t confirm rumours he tripped over a black cat while walking under a ladder and fell through a mirror the night before Moree, but it wouldn’t surprise us if it was the case. After suffering a puncture in the opening moto (seriously, who has ever had a flat at Moree?), Styke’s always-reliable Serco YZ250F suffered a costly mechanical failure in the final. With that, his handy 31-point buffer transformed into a 21-point deficit with one round remaining. The kid gave it his all at Coolum, but came up two points short when Josh Cachia passed him in the final moto of the series. Unlucky doesn’t cut it.

Going out on top
What better way to wrap up your professional motocross career than with an international championship? CDR Yamaha’s Josh Coppins wrapping up just his third international series win will guarantee he’ll always be remembered as a champion, a tough bastard, and one of the hardest blokes to pass on the track. Coppins lost some momentum through the middle part of the championship, but after announcing his professional retirement from the sport at Appin, it was like a weight lifted off his shoulders and he bounced back stronger and harder than ever to thwart Todd Waters’ challenges and claim the MX1 crown. Thanks for the memories, Josh – you’re an animal! The Moree round was one of the season's highlights, as usual. Image: Simon Makker/Makkreative.com.

Thank God for RACESAFE
Just when we thought we were going to get through an entire championship without a red-flagged race, the scarlet flag waved at the start of the final race of the MX2 championship. Kirk Gibbs and Errol Willis collided in the air at the front of the pack straight out of the first turn and Gibbs hit the ground hard. The Suzuki RACESAFE crew rushed to the scene and almost certainly saved his life with their quick actions. Gibbs was rushed to hospital where he was stabilised and then treated for a broken wrist, busted collarbone, and a multitude of soft-tissue injuries. Remarkably, Gibbsy walked out of hospital two days later. Can’t wait to have you back, mate.

The future is now
As with the MX1 and MX2 classes, the MXD field really heated up in the second half of the season, as four different riders stood on top of the box in the last five rounds. Kayne Lamont’s consistency aboard the KTM 250SX helped claim the highly-contested title, he had to contend with a fast-finishing Jay Wilson (who won at Appin), his series rival Dylan Long, and Dylan Leary, who finished the season with the Axis Motorsports Kawasaki team and looked stronger than ever. Teenaged Millsaps Training Facility prodigy Luke Clout also returned home for the last two rounds and spanked everyone at Moree.

Pride-vateers
Our sport would be a shadow of itself without the privateers. In fact, it’d be downright boring. 2012 saw privateers step up to the plate in both the MX1 and MX2 classes, with an emotional Jake Moss winning the Sharky McFarlane Award in the MX1 class for his eighth-place series finish, and DPH Honda’s Cheyne Boyd claiming the Jono Porter trophy for his sixth overall in the MX2 championship. Everyone loves the underdogs and we couldn’t be happier for all the non-factory riders who punched well above their weight this year. On ya.