As we wind down from an action-packed day testing Suzuki’s brand new 2013 model RM-Z450 at the Australian press launch, some surprising news has surfaced that newly-crowned Australian Motocross Champion Josh Coppins will ride for Monster Energy Yamaha at the final two rounds of the grand prix season in Europe.

Coppins was always scheduled to rejoin his former Rinaldi-run team for the upcoming FIM Motocross of Nations, however the news that he’ll race the world championship in Italy and Germany comes as good news for the MX Nationals.

Why? Because firstly, Coppins is a well-respected name worldwide and obviously has close ties with various teams in Europe. He’s going in with no pressure, but considering his current form and confidence from winning in Australia, experience could shine through for The Lizard.

It’s a nice way to depart the sport as he retires at the end of 2012, setting up a fairytale ending of sorts as he gets to conclude his career on factory equipment at the top level. We wish the best of luck to Josh in his travels and fingers crossed he can put forward some positive performances.

With Josh Cachia set to race this weekend’s final round of the Lucas Oil Pro Motocross series at Lake Elsinore in California, we have a lot of interest in the upcoming events from around the world. Again, it’s a sign of just how strong the MX Nationals have become as a series because people are beginning to stand up and take notice.

By the way, speaking of the nationals, did you see the KTM 2 Stroke National film that Adam Spence made following the Coolum round? If not, check it out by clicking here, because there is no music, just straight up two-stroke action on the gas! 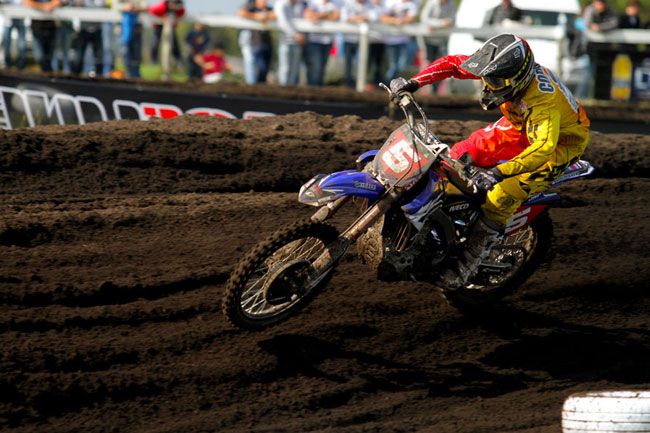 Today at the Australian press launch of the new RM-Z, Motul Pirelli Suzuki was on hand, as was Coppins’ rival for this year’s MX1 title, Todd Waters. Waters has driven down to New South Wales from the Gold Coast and plans on completing initial supercross testing before turning his attention to the MXoN in Belgium at the gruelling Lommel circuit.

It’s a difficult position to be in for the Aussies, because while MXoN is the pinnacle of the sport’s calendar, a good result in supercross is important for their value when re-signing for the following season.

We can expect that Waters, Lawson Bopping and Luke Styke will all be chasing sand in the coming weeks, but of course it will be difficult to find anything that will truly prepare them for the deep and torturing sands of Lommel in a few weeks time.

And while those guys prepare for both MXoN and ASX in split schedules, defending supercross champion Jay Marmont has taken delivery of his Monster Energy Kawasaki KX450F and will immediately get to work with about a month and a half remaining before Dubbo’s season opener.

Marmont knows he needs to win races in supercross after failing to finish on the podium all season long in the MX Nationals, and seems to have a renewed spark since the outdoors wrapped up. Still, if he encounters the same troubles he did in MX, this title could be another long one for him considering the talent that’s emerging.

We mentioned a number of weeks ago that Daniel McCoy is in line to join Bopping at CDR Yamaha for supercross and that rumour is becoming closer to reality by the day. Current Pro Open class number three and proven supercross rider, it seems like a good decision for the team to sign him for the four rounds.

We’re still await confirmation whether Ben Townley will be back for the series, but judging by his return to riding last month, there is an increasingly good chance that he will be. It is hard to say though after such a serious injury, but it would be good for the sport to see him in the mix. Remember, he is a former AMA East Coast Supercross Lites Champion!

One thing to keep in mind for supercross is that we’re going to see 2013 models across the board. It’s the perfect place to start marketing next year’s model if your team is winning, although we’re not yet certain whether Honda will have its slick new CRF450R in time. Watch this space… Will Ben Townley be back in time for Australian Supercross? Image: Simon Makker/Makkreative.com.

The silly season seems to have stalled at the moment, with a few key players needing to soon make their decisions. Those riders include Waters at the top of the list, and then of course new MX2 champion Ford Dale. Both are fielding multiple offers right now, with KTM suspected to be interesting in the services of both for its brand new factory MX1 campaign in 2013.

Another name that is in the mix right now for a potential factory seat on a 450cc is Luke Styke, but then again he wouldn’t be silly to stay in the MX2 class for Serco Yamaha and try win the title he came within two points of this season.

Somewhat of a surprise candidate for a seat right now is Dean Ferris and he’s also high on the agenda of factory teams with rides available. A proven outdoor title contender with world motocross experience to his name, Ferris was initially believed to be heading back to Europe, but from what we hear it’s not concrete. That throws a giant spanner in the works and could be a perfect suit for KTM as well (or a variety of other teams!).

Marmont has been linked to various teams as well with his one-year deal at Kawasaki up, but of course they are keen to keep him on and make right what went so wrong in 2012 so far. Kawasaki, Yamaha or KTM, Marmont is a package that you can’t look past since he’s so popular and has won both MX and SX titles many times.

Dan Reardon has launched a few social networking pages for his new training business, Alteregoelite. While he still has supercross coming up for JDR/KTM, the Queenslander is full steam ahead with his new venture and you can find it by searching the name on Facebook and Instagram.

That’s all for yet another week here, thank you for stopping by.