Two more races to go in the AMA national series and two weeks closer to the beginning of supercross. I’ve been a mechanic or media guy on the beat for 15 years and each and every year it’s amazing to me how fast the year goes. It doesn’t seem that long ago that I was standing on the track at Anaheim 1 for the very first supercross race. 27 races indoor and out and two more to go and with that, some deep thoughts.

As we’ve written here a time or two, the Motocross des Nations team for USA has been selected and it’s Ryan Dungey, Blake Baggett and Justin Barcia. There was some controversy with the selections but in the end you could justify any number of racers for the third spot and the USA will still be a powerhouse.

I’m thinking about the different countries that will be lining up for the Olympics of Motocross and I have to think USA is the favorite but not far behind has to be the Belgians. The Americans don’t race on a track like Lommel (where the race is being held) and the Belgians do.

The Belgians have Jeremy Van Horebeek, Clement DeSalle and Ken de Dyker. They’ll need a big effort from the big Belgian De Dyker to pull it off but he’ll be on the factory KTM and who knows, maybe the home track advantage will work to their advantage? It’s going to be closer than a lot of American fans are going to want it to be methinks.

Speaking of the MXDN, a couple of countries that won’t be sending teams are South Africa and Canada and it’s mostly because of injuries. All the top riders from those countries are either hurt as in South Africa’s case of Tyla Rattray and Gareth Swanepol.

Or in Canada’s case, the top riders are committed to the Montreal Supercross on that same weekend and the team they were going to send has incurred injuries as well. South Africa would have definitely been a top five country if it wasn’t for the injuries and Canada well, my home country hasn’t had their crap together for this race in a long time. 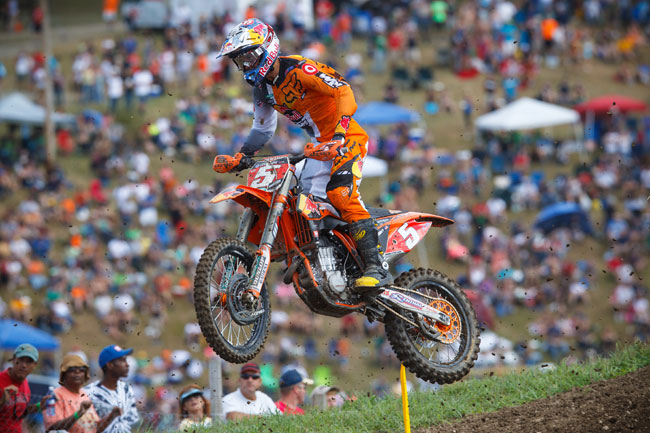 Coming off a career best third place overall last year, I feel for you Aussies in regards to the MXDN. Chad Reed, Michael Byrne, Brett Metcalfe are all hurt and unable to go so the team that is going is made up of a bunch of newcomers. All very fast racers but I think they’re going to be a bit overwhelmed when it comes to this race and chalk this one up to a learning year for the green and gold.

Ryan Dungey wrapped up the 450 title last weekend, his second career 450 MX title and fourth overall national championship which was no real big surprise. And Blake Baggett has almost a moto lead in the 250 Class with only four motos to go. He’s looking good to capture his first outdoor title with the Steel City and Lake Elsinore tracks to go, both of which are right up his alley.

Judging by the last couple of races, Baggett’s going to have to keep an eye on Eli Tomac who’s third in the points but coming on like gangbusters than Justin Barcia who’s failed to reach the heights at his two best tracks that we thought he would. Tomac’s won two out of the last four motos and has been very impressive in doing so.

Although I think that Baggett’s looking good for this, I was speaking to a member of the Pro Circuit team and they’re definitely not counting any titles before they’re hatched. The team knows all too well what having defeat snatched from the jaws of victory means.

Despite all the championships Pro Circuit has won over the years, the two defeats of Christophe Pourcel come to mind. Two straight years, Pourcel had a nice lead in the points with scant few motos to go when his motor let go (2009) and he crashed out in the last moto of the year while in championship position (2010). Pro Circuit will be doing some double and triple checking of everything in these next four motos.

A couple of silly season notes that we’re not supposed to talk about but yet, we all know they’re happening. After a year at factory Honda, Justin Brayton is returning to JGR Yamaha for next season. Brayton has had a good year on red and they were trying to re-sign him for next year but with Trey Canard coming back and Justin Barcia moving up to the big class, there was no budget for Brayton. Justin Brayton will return to JGR Yamaha after just one season at Honda. Image: Simon Cudby.

I know the Honda guys really liked him and he made the podium a few times this year but there’s also no doubt Barcia and Canard have more upside than Brayton. JB’s a hard worker, a great guy to have on your team and he’ll put in good results for the JGR guys.

He’s also got a place in North Carolina where the team is based and he likes the YZ450F, which is a plus. Larry Ward rode for factory Suzuki a couple times (spread out over eight years) but Brayton’s return to JGR after only one year is unprecedented.

The other news is Broc Tickle has signed a letter of intent with the Hart & Huntington team. The H&H guys are switching to Suzuki’s next year (with some factory help) and also they’re going outdoor racing. Tickle has been very good this year outdoors and it’s a signing for the H&H guys.

With Ricky Carmichael coming onboard as consultant/riding coach, Tickle will benefit from that knowledge and as well, the H&H guys are still looking for one more guy.

I’m hearing that Brett Metcalfe is not going back to Suzuki next year. In speaking with Metty a little while ago, I know it was in the air but rumors are that Suzuki is just going to go with James Stewart next year.

If this is true (and it’s unconfirmed) then the currently-injured Metcalfe becomes the best rider still left on the market for 2013 along with Kyle Chisholm. I know you’re saying “What about Ryan Villopoto?” but that deal is getting wrapped up and RV is going to be staying with Kawasaki for the next two or three years.