Another season of the MX Nationals have been run and won, with three brand new Australian Motocross Champions crowned at Coolum on Sunday. The year lived up to expectations in many ways, although there were a lot of surprises along the way.

I’ll admit that us here at MotoOnline will miss new MX1 champion Josh Coppins when he heads into retirement at the end of 2012. He’s been all class since joining CDR Yamaha last year and it’s fitting that he can bow out as a champion. The speed and will to win that he’s shown after a 17-year career really is inspiring.

On the other hand this year, the performance of Todd Waters was unbelievable. There can only be one champion of course, but I think Australia can breath a sigh of relief to see Waters reach his potential at just 21 years of age. The changing of the guard is almost here again, but you can bet that the likes of Jay Marmont will battle on for a few years yet.

Speaking of changes, Coolum not only marked the final national for Coppins, but also for Aussie legends Craig Anderson and Dan Reardon. Both have been multi-time Australian champions and both have proven to be class acts themselves throughout their respective careers. Cachia is now setting his sights on the Lake Elsinore round of the Lucas Oil Pro Motocross Championship in the US and I think he can surprise out there with the support of JDR/J-Star/KTM. He’s comfy with the team, welcome by the staff at JDR and has to be confident considering his recent form. If all else fails, it will at least be an awesome experience for him to work from in 2013.

The scariest moment of the season came at Coolum when Kirk Gibbs crashed on the first lap of the final MX2 moto. After an incident with Errol Willis, Gibbs was critically injured, but was soon stabilised and transported to hospital at Nambour.

Thankfully he’s since been released with a few minor injuries, and should be back racing in 2013. It’s times like these that the sport realises just how lucky we are to have Suzuki RACESAFE involved, because they truly are one of the most vital components of every single national.

The post-season celebrations began on Sunday evening and continued into Monday for some, but come Tuesday all attention switched to the upcoming Australian Supercross Championship for most. Now that the outdoors are over, we’re really going to get a good idea just how popular this ‘ASX’ series will be.

Meanwhile, the likes of Waters, Lawson Bopping and Luke Styke will have their minds well and truly set on the Motocross of Nations at Lommel to be held on 30 September. These guys are giving up a lot in their supercross preparation to represent Australia, so fingers crossed for a great result in one of the toughest events on the international calendar. 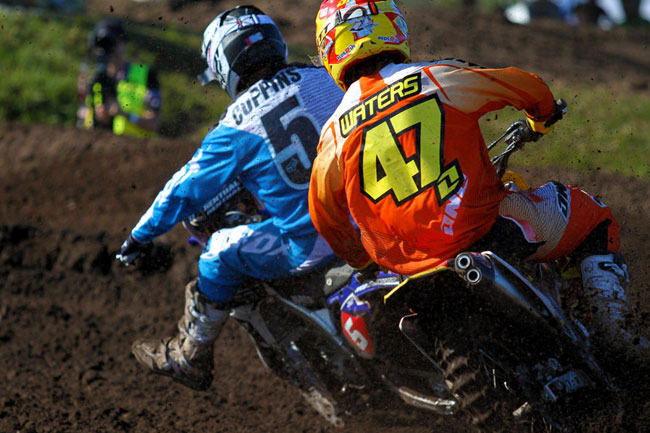 Josh Coppins and Todd Waters took the MX1 title down to the wire at round 10. Waters won the battle, but Coppins won the war. Image: Simon Makker/Makkreative.com.

It’s going to be interesting to see if Waters can carry his exceptional form into supercross this season, which I think he can considering his form since switching to Motul Pirelli Suzuki. It’s also yet to be announced if Cody Cooper will be back for SX or not after he raced to third in the outdoors.

If there’s one thing that seems to be happening right now when it comes to the silly season, speculation suggests that Australian talent is becoming more popular over the internationals again. Both Brad Anderson and Billy Mackenzie’s deals are up at the end of this year, with both looking outside of their current teams for seats if rumours are accurate.

It would seem the performances of Waters and Bopping this year have put the ball back in the Aussies’ court, because the likes of Styke and Ford Dale have been linked to 450 teams. There also happens to be the lingering rumour that Matt Moss could return home, and the fact that Tye Simmonds scored two podiums in the season’s first half before injury hasn’t gone unnoticed.

Whatever happens for supercross and 2013, we’re bound to see lots of changes. There are too many rumours to list right now and we’d only be adding fuel to the fire without any concrete info, but the only rider confirmed and officially announced right now is Ben Townley at Carlton Dry Honda Thor Racing.

Next up though is the hype that always come ahead of the MXoN, which we will be covering every step along the way. It’s one of those events that creates so many unknowns and variables every single year. And I suppose, that’s exactly why we love it!