Suzuki Australia sent us the following information on its 2013 RM-Z450: 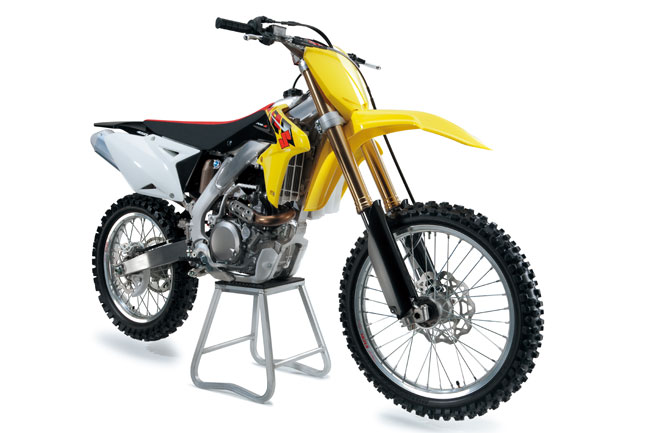 Chosen by champions like James Stewart, the 2013 RM-Z450 continues the legacy of its ground-breaking predecessors with new engine upgrades, Showa Forks, exhaust, frame and more.

Developed and tested by factory race teams, the all-new piston is 13 per cent lighter and the piston pin has a Diamond-Like Carbon (DLC) surface treatment, which increases durability and lowers friction.

A new intake camshaft and updated electronics have been fitted to be in harmony with the new engine internals.

The RM-Z450’s all-new frame is 91 grams lighter with changes to the frame head, rails and down tube and a refined seat rail for rigidity and balance, contributing to increased stability and better handling.

To fine-tune fuel preferences to suit track conditions, two couplers are enclosed allowing the rider to easily change fuel settings between three fuel maps (lean, standard and rich) with the rich-lean coupler relocated for easier access and change without tools.

The RM-Z450 is now equipped with an all-new race-bred 48mm Showa Separate Function Fork containing the spring on the right leg, while the left leg incorporates the cartridge assembly to manage damping with the result being less friction, increased damping and an overall weight saving.

The 2013 Suzuki RM-Z450 is available now for a Recommended Price of $11,790.00, with motocross and supercross racers of the Suzuki RM-Z450 eligible to register for Suzuki’s Support Rider program, offering generous contingency payments on national and state championships.

For further information on the 2013 RM-Z450, interested customers should visit their local Suzuki dealer, which can be found through the Dealer Locator on www.suzuki.com.au.