Unadilla was a crazy race, especially in the usually boredom-inducing 450 Class. What we’ve seen has been Ryan Dungey running away with the motos, Mike Alessi, Jake Weimer and sometimes Andrew Short after that and then the rest of the pack. It’s been a funeral like procession for most of the year, but Unadilla, now that was something special.

The very first guy out of the gate was BTOSports.com’s Michael Byrne with the holeshot. He was passed by Kawasaki’s Jake Weimer and Weimer was now in the lead. He went down hard (it would affect him all day as he had his worst race of the season) and Byrne inherited the lead again.

At that point, Byrner started pulling away with some great riding. He was on his way to grabbing his and his team’s first ever 450 motocross win when he caught a rut wrong and broke his leg. Yes, he didn’t even crash!

Terrible blow to the friendly Aussie (somewhat tempered by the fact that he re-upped with his team for next year two days before the race) and with that, Pro Circuit’s Broc Tickle grabbed the point position.

And now, finally Ryan Dungey was there and he passed Tickle with a couple of laps left for the win. The rich get richer folks! So if you’re keeping count, it’s four different leaders in one moto and for the 450 Class, that’s a big deal.

I really believe that Byrner was going to win that moto. He had lost some time to Tickle and Dungey in the previous two laps before his injury but he still had an eight second lead with about six minutes and two laps remaining. Which works out to be about six laps in total. Byrner’s in shape, he’s a wiley vet and I just believe he was going to hang on for the win. As it is though, the moto gods struck and showed us that sometimes, motocross sucks. 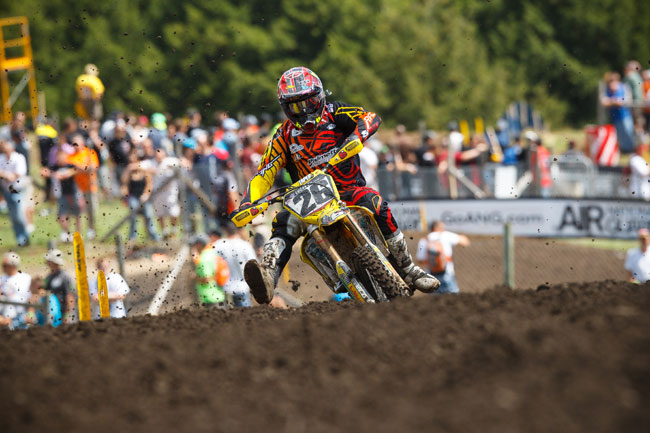 Speaking of Tickle, he got his second runner-up overall on the year and he’s got some serious momentum going into next year. He’s the talk of the pits for next year as to where he’s going and for the first time in his life, many different people want to hire him.

Tickle’s going to cash in on his great outdoor season and hopefully he can keep it going for next year. Sounds like he’ll be on Suzukis and moving to the H&H team for next season.

Why not staying with Pro Circuit? Well, owner Mitch Payton’s first full-time foray into the 450 Class has been going well with the team able to handle the 250 and 450 Class to their usual standards and Tickle, well as we pointed out he’s been very good.

I would think that just staying with Mitch would be ideal for all parties involved but in this tangled web we weave, Tickle can blame this on Ryan Villopoto. You see RV still hasn’t signed his Kawasaki deal for next year and beyond because Monster Energy has to get committed to Kawasaki for the same term (or longer) as Ryan wants to sign with.

After all, it’s the sponsors that pay the bills in the end right? So with Villopoto’s agent dragging the talks out in order to get the best deal possible for Ryan (that’s his job, right) and Kawasaki talks with Monster about getting back onboard, everyone’s contracts in terms of Kawasaki are on hold.

Payton can’t officially get his new riders (Martin Davalos and Justin Hill) under contract and he can’t commit to a 450 guy until Kawasaki releases the purse strings. In a weird way, it’s all Villopoto’s fault as to why Tickle is going to leave. 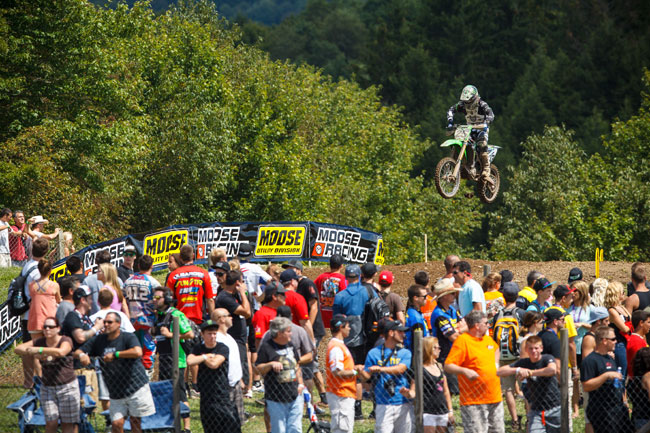 Will Broc Tickle be Suzuki-mounted in 2013 with Hart & Huntington? Image: Simon Cudby.

Eli Tomac’s ride at Unadilla in the second moto was something to see. Tomac chased down his teammate Justin Barcia in a very methodical manner, made the pass and took off. Tomac’s shown some awesome speed in winning two of the last four motos and he’s pulled to within four points of Barcia for runner-up in the points.

Pro Circuit’s Blake Baggett’s got this title almost wrapped up but there’s some definite momentum going in Tomac’s favor for the last four motos. It’s so strange this 250 Class because at different times, different riders have shown some incredible speed at different times.

Baggett we’ve seen it here and there (can you believe the points leader is only third in laps led?) Barcia early on had some great motos, Ken Roczen’s led a ton of laps and Tomac, well he’s been the new Baggett in coming from the back. Except Baggett is still the new Baggett…you get my drift?

Congratulations to KTM for clinching their first ever 450 championship and as well, sweeping both classes for the first time ever in an AMA national. What a day for Roger De Coster, the team manager who was so instrumental in bringing Ryan Dungey to KTM as well as getting the all-new 450 going.

I’m not sure what it’s like in Australia, but I know that in Europe, in Canada and now in America-KTM is really coming on. They’re spending money when others are pulling back, they’re investing in new and exciting bikes and innovations and it’s paying off. 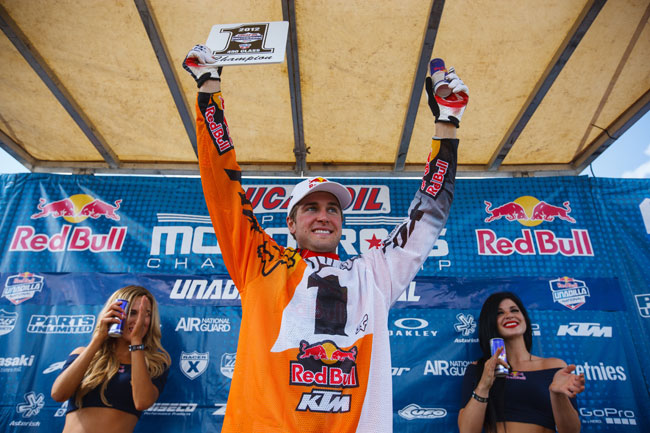 Dungey is obviously going to be on top for a long time but when he’s gone, there will be Ken Roczen coming on next. One of the next big stars in America, Roczen won his first ever moto at Unadilla while Marvin Musquin won the overall with 2-3 scores. And if neither of those two work out, KTM can always look to Europe and pull a promising rider from over there to come here. Don’t look now but KTM has come a long way from left-side kickstarters, no linkage and green seats!

There’s nothing like the American amateur series in the rest of the world. Anytime I hear complaining about the economy hurting our sport, I’ll always just ask that person to go check out some of America’s amateur races that are spread across the country.

It’s there that you’ll find giant motorhomes after motorhomes with bikes and parts that would put half the pro teams to shame. A couple of riders that, when they left Loretta Lynn’s and went into the pros were, at the time, the all-time winningest riders at Loretta’s were Tim Ferry and Jimmy Button.

The riders come out of the amateur ranks nowadays ready to rip. They are home schooled, have trainers, have great bikes and are little professionals right out of the box.

It’s with this that we see Zach Bell, the Horizon Award Winner awarded to the most impressive rider at Loretta’s, stepped from the amateur ranks to GEICO Honda for the last two races and has led two motos before crashing. Bell’s got great speed and although the end result hasn’t been there as far as moto scores, it’s obvious that he’s just another kid with a bright future in the sport.