What a race in Southwick this past Saturday. It was a little weird and wacky, but of course when you combine the deep sand of Southwick with a ton of rain the day before to make the sand deep, some rain on race day and then the demands on men and machine for two 35-minute motos, you’ll get some of that.

I’ve always liked Southwick, it’s buried right in the middle of the town called Southwick, Massachusetts and it’s a super old-school race. The first national there was held in 1976 so as you can imagine there is lots of history there. It’s also the only track on the USA national circuit that is sand.

You could actually make a case that it’s the only track in the whole series that has a different type of soil. One of the things that a lot of people outside America don’t know is that most American national tracks are watered thoroughly, ripped up, mixed with saw dust and prepped immaculately so that there’s not much dust.

Tyre choices week to week don’t vary very much except for Southwick, Washougal and maybe Steel City. Other than that it’s perfect loam.

Southwick however, isn’t on the level of a Manjimup or Lommel but it’s the best we have and with sand, you can either ride it or you can’t. Kevin Windham has won a lot of nationals in his career but he’s never won at Southwick and only has a handful of podiums at the track. He can’t ride the sand anywhere near as fast as he can ride everywhere else.

Matt Georke is from Florida and can ride the sand – his only national win came at Southwick in ’09 and he’s never even podiumed a national before. Gareth Swanepol’s only podium finish came at Southwick when he won a moto there. Sand, hard pack, mud, snow; it doesn’t matter what it is, Ryan Dungey can ride it.

The KTM kid even had to stop for a pit stop this weekend when he lost some gas when he crashed and his gas cap popped off and the Dunge still won the overall via 1-2 moto scores. Guess who won the second moto? Yeah, Tyla Rattray who had never been off the podium in three career races in the 250 Class. Yes, Rattray is one of those that can ride the sand. Ryan Dungey can race up front, no matter the conditions or track. Image: Simon Cudby.

It was a great call by the KTM guys to pull Dungey in as according to his mechanic Carlos Rivera, there was no way he was going to make it to the end with the fuel he had left over after the spill. It was a total freak thing that the cap came off as well, there was an indent on the cap from something that hit it right at the exact angle to pop it off.

Team USA was named before the race and it went as expected when Dungey, Blake Baggett and Justin Barcia were coroneted as the guys to go to Lommel, Belgium and defend the stars and stripes. The inner workings of the decision was that the injured Ryan Villopoto was asked about the possibility of him coming back in time but manager Roger DeCoster wanted RV to line up for a national or two beforehand.

RV couldn’t commit to that and so Barcia was named. James Stewart was never seriously considered for some reason and Mike Alessi was written off as well despite a history of the two 450 guys being the top two 450 guys in the points.

DeCoster managed Mike (and his father Tony who let’s face it comes with Mike as his guardian/protector/mental coach) for one year at Suzuki and one at KTM and he’d seen enough to know that Mike wasn’t his pick.

It’s a bit controversial but really, Alessi, Barcia, Weimer (whoever) the USA team is the favorite to win. At Southwick, Alessi rode well to a runner-up finish but definitely didn’t come close to beating Dungey and changing anyone’s mind about Mike getting on the team.

But with Jake Weimer’s bad day (Jake crashed roughly 763 times in both motos) Mike pulled further away into that runner-up spot behind Dungey in the points and could be looking at a career best points position in the 450 Class.

Barcia didn’t have the Southwick that he or his team hoped for and some of it was due to bad luck and some of due to his own mistakes. The biggest problem for Justin was he didn’t get the starts that he needed and once you don’t get the starts, then things sometimes tend to go sideways.

In the second moto he was in third and moving forward when he went down in a turn. Barcia’s very good at Southwick as he grew up on the track and it was thought by many that the points leader Blake Baggett was going to have to hopefully not lose too many points because after all, it was Barcia’s race to lose. Instead, Baggett won the overall and put 13 points back onto his lead.

Afterwards in talking to the Pro Circuit guys, they were over the moon with the fact they won Southwick. It’s their main rival’s GEICO Honda’s home track and in the past they’ve had issues at Southwick with their bikes. 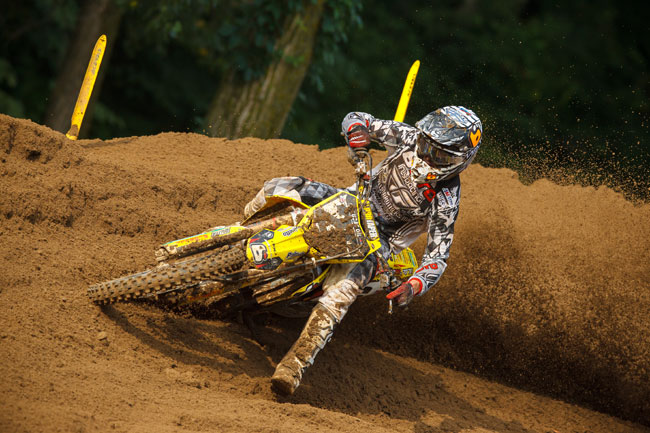 Is Michael Byrne going to be KTM-mounted in 2013, still with the BBMX team? Image: Simon Cudby.

Ricky Carmichael, Christophe Pourcel and a few others have all experienced issues with their bikes that have cost them wins at the sand track. To come there and win was something they definitely didn’t expect to do and as I said, spirits were high at the truck after the race.

Even though Baggett won, GEICO Honda’s Eli Tomac tied with him for the overall win and was no doubt the fastest guy on the track in either class at Southwick. Qualifying fastest in both practices, winning the first moto with ease and the way he knocked almost 20 seconds (yeah that’s right, 20 seconds) off of leader Ken Roczen’s lead and caught up.

Tomac was on fire out there and based on all the evidence, he was going to win the ’Wick. Until his caught a tree with his shoulder in a tight left-hander and was flung off his bike. That was it, the charge was over but for a few laps there, Tomac was very impressive.

In some silly season news it was reported from some good sources that Hart & Huntington team had let Josh Hansen go from their team. Hanny had underperformed this year for the guys (although he was also injured) and there were more and more off-track stuff going on with the number 100 (some unflattering photos from a Holland race, trouble in nightclubs and at the final race in Las Vegas with police and scooters) and maybe the team had finally had enough.

Ricky Carmichael is going to be a big part of their team next year as they switch to Suzukis and one has to think that he’s probably not a fan of this off-track stuff. I couldn’t get confirmation on whether this did happen or not but either way, one has to think that Hansen is on a short leash if it didn’t get clipped.

Also rumors indicate that Michael Byrne is close to an agreement with his old team, the BTOSports.com squad, to go back there for 2013. The team is going to switch to KTMs next year with some factory support and Byrner, despite struggling with injuries, has been pretty good this outdoor season.

The veteran Aussie racer just has to stay healthy and make it through a supercross season as he hasn’t been able to do that for a couple of years.