We may be a month later than in recent seasons, but the final rounds of the Monster Energy MX Nationals are upon us after what has been an extended 10-round season to date. So many surprises have taken place, but once all is said and done, it’ll be safe to say that all champions crowned will be deserving.

Moree’s penultimate round this weekend will be just as important as Coolum itself when it comes to the MX1 title fight between Josh Coppins and Todd Waters. Right now 12 points separates them, but the battle into Coolum will be much clearer come Sunday night.

Personally, I have a feeling that these final two rounds will be here and gone again before we know it. Champions will be crowned, another season will be in the books and we’ll all be reflecting on what a great year it was. Who will take home the number one plates? Nobody knows, but it’s certain to be awesome!

This weekend we’ll see some new faces on the start gates, including the return of Tye Simmonds if his form at the Dubbo Roar event is anything to go by. Simmonds won on Sunday after a scary crash during the mid-season break in June, so fingers crossed he can finish the MXN season in style.

Speaking of the Dubbo event, finishing second to Simmonds in the Open class was Raceline Pirelli Suzuki’s Errol Willis. He’s had a tough time in the MX2 nationals this year, so that race might just be the boost that he needed for these final rounds. Veteran Craig Anderson completed the podium. The Lites class was taken out by Kiwi Scott Columb, taking advantage of a DNF by Willis in the final moto. Berry Sweet Lucas Oil Yamaha’s Luke Arbon was second, with Jay Wilson battling to the third and final podium position.

Another new face at Moree will be Luke Clout, fresh from racing at Loretta Lynns in the US. He’ll form part of the MX Factory team, which has pretty close links with the factory Carlton Dry Honda Thor Racing team. Clout will ride in the MXD class, so keep an eye out for him.

Also confirmed for MXD this weekend is Jayden ‘Jayo’ Archer, joining the Zero Seven Motorsports team. The FMX rising star will be in a no pressure situation, working alongside Adam Monea in the Suzuki-equipped team. The support for rising Aussies right now is exceptional.

KTM launched its 2013 model bikes at Louee in New South Wales yesterday, where Ryan Marmont was on hand and looking typically smooth on the entire range. Interestingly, Marmont was testing between his current 2012 model 250 SX-F and the newly improved 2013 model, looking ultra comfortable on the production bike.

Marmont will likely return to racing this weekend at Moree for the JDR/KTM team, although it’s yet to be officially announced by the team. His form is good though and he had a good result in WA this month, so hopefully we see the number three back in action.

Keep an eye out this weekend for Dean Ferris, who’s back in Australia after an injury-plagued rookie campaign in World Motocross. Ferris isn’t racing at Moree or Coolum of course, but we do expect him to be there checking out all the action. 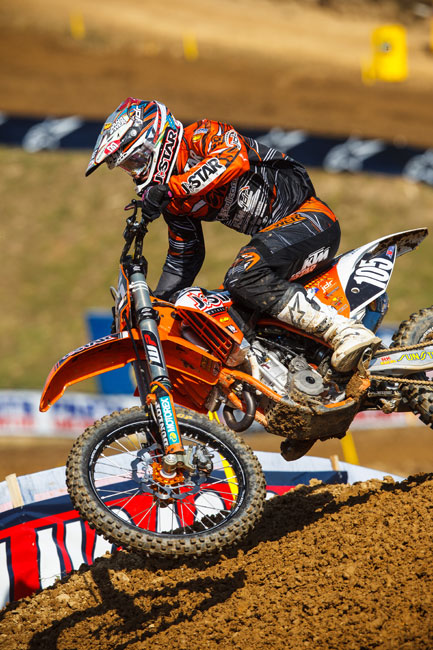 Another international Aussie who’s back in the country is Matt Moss, according to sources within KTM. Speculation is mounting that Moss will be on a 450 for the Australian Supercross Championships, which I think is a pretty good idea if they have the 2013 model available to him. It’s only a rumour and far from confirmed right now, but if he does, mark him down as a legit title threat.

New Zealand’s Motocross of Nations team will this year consist of Josh Coppins, Cody Cooper and rising star Kayne Lamont – all three locals in the Australian championships! It will be Coppins’ final race, a fitting finale to a fabulous career.

While on the subject of fast Kiwis, we’re hearing Ben Townley could be back on the bike already in New Zealand. His return date hasn’t been certain, but if he isn’t on it yet, then he will be very, very soon. Expect another Jetpilot film to be released in the coming weeks.

We’re not sure who Team Australia will consist of since Chad Reed’s out and so is Brett Metcalfe, so stay tuned for that. Personally, I would like to see Todd Waters and whoever wins the Australian Motocross Championship in MX2 get the opportunity.

But in saying that, if Matt Moss is fit then he’d also be good on a 250F and don’t forget Michael Byrne, who has had a strong AMA season so far. He’s one who a young team could count on when it comes to experience and no doubt can still ride exceptionally.

Or if Australia’s selectors want to opt for a youthful team, go for Waters, Lawson Bopping and whoever wins the MX2 title (most likely Luke Styke or Ford Dale).

That is all for this week in the MotoInsider feature on MotoOnline.com.au, so thank you for stopping by for another week.