Everybody loves the silly season, so we asked those in the know for their predictions.

The months from August to December are a moto-journo’s paradise. Motocross championships are building in intensity, champions are emerging, and the pits are ablaze with gossip as the annual MX Musical Chairs begins.

Who will end up under which awning for 2013? Who’s going to sign with the new KTM factory teams and cause the shuffle-go-round?

MotoOnline.com.au asks a number of industry experts, riders and race team members for their take and predictions on where the chips will fall… 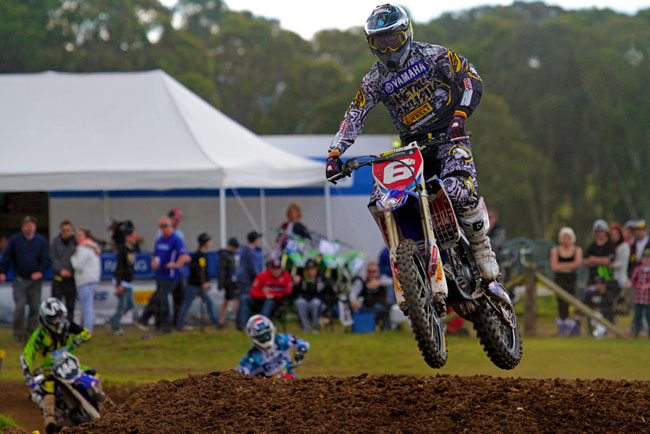 Luke Styke could step up to the MX1 class for 2013 if things go his way. Image: Simon Makker/Makkreative.com.

Anthony Giles, Choice Motorsports KTM team manager
This silly season could see a number of riders changing seats and it’ll be interesting to see where everyone ends up. There are whispers Matt Moss could make a comeback for the 2013 motocross season, but whether he does, or where he ends up, is anyone’s guess.

I’d like to see Luke Styke move up to the MX1 class after such a strong season this year, and with Coppins retiring, I like Styke’s chances of stepping into the CDR team. It wouldn’t surprise me if Todd Waters moves camp. The world’s his oyster and with his contract up this year, I think a few teams may be sniffing him out.

It also wouldn’t surprise me if the JDR team holds on to Josh Cachia and Ryan Marmont for next year, even though they won’t be the official KTM team. With the team established both in the States and Australia it could give Cachia an opportunity to test his worth against the US riders as well as gunning for the MX2 MX Nationals crown.

Luke Arbon, MX2 racer for Berry Sweet Lucas Oils Yamaha
While the industry gets caught up in all the hype around the silly season, us riders don’t get involved too much, especially if our contracts aren’t up. I signed a two-year deal with Craig Anderson’s Berry Sweet Lucas Oils Yamaha team for 2012-2013, so I’m locked in for next year – I just need to focus on getting my results better over the remaining two rounds to help the team lock in sponsors for 2013.

As far as the other boys go, I’d love to see Gibbsy step up to the MX1 class as he’s a bigger guy and rides a 450 really well. With Josh Coppins retiring it could possibly open a door for him with the CDR Yamaha team. I know he talked to CDR last year, but they opted to sign Lawson [Bopping] instead.

You hear a few conflicting rumours flying around, so we’ll have to wait and see who ends up where. Kam Williams, MX Nationals commentator
KTM opening up more seats will see them create the biggest stirs heading into next year. There are rumours that they’ve talked with Brad Anderson, but that’s only hearsay.

You’d have to say Todd Waters and Josh Cachia are hottest property right now, but whoever signs Waters is going to have to get a fat wallet out, as he’s not going to be cheap.

While on KTM, I genuinely hope Brenden Harrison doesn’t retire and signs a new orange deal, and I think there’s also the possibility Jay Wilson could go back to KTM in the future, as he’s a KTM kid and obviously comfortable on the bike.

The biggest news I’ve heard though is Josh Coppins is going to retract his retirement and has signed a multi-million-dollar, four-year deal to ride for the Hyosung Chinese factory team. He’ll have four bikes per round – a new one for every time he gets behind the start-gate.

Word on the street is Jimmy Barnes is also starting a team called the Working Class Men Racing. They’ve picked up a lucrative Bundy rum sponsorship and their race wear will comprise of short shorts and blue cotton singlets. This is all off the record, right?

Michael Marty, Serco Metal Mulisha Yamaha mechanic
Serco will again field two riders next year, but we’re still in the early stages of locking everything in. Both Luke Styke and Kirk Gibbs want to step up to the 450s next year and I’d love to see Gibbsy get a 450 ride. It’s definitely time for him to step up, and he has a lot of pace on the bigger bike.

Personally I think Stykesy should stay in the MX2 class for another year and gain some more experience, but we’ll have to see what happens there.

I’ve read that the Honda team will elevate Ford Dale to the MX1 class and have him alongside Ben Townley for 2013, and you’d have to imagine Suzuki will be very keen to keep hold of Todd Waters after the success he’s given them in 2012.

I heard on good authority the other day that Casey Stoner is returning to his motocross roots and starting a team with Josh Coppins next year called Never Stop Racing. Details are a bit sketchy, but Stoner is still on great terms with Ducati and there’s a possibility he’ll ride their new prototype motocross bike for the series.