The AMA series is going on a two-week break once again after we just had three races in a row and here are a few thoughts, musings and random rumors after eight or twelve rounds are down.

Ryan Dungey’s ten moto winning streak ended at Washougal and the rider who put a stop to it was the rider that most of us thought it would be.

Motoconcepts Racing’s Mike Alessi used the formula that worked to a T. Grab a holeshot, hold off Dungey for as long as you can and hope Ryan makes a mistake. The formula hadn’t worked so far because Dungey hadn’t made a mistake. But he did at Washougal and Mike went on to win the first moto.

I wouldn’t say it’s an upset by any means, it’s pretty hard to be perfect each and every time but Dungey was close. Alessi’s win (his Motoconcepts team’s home race as well which had to have been sweet for them) was a step forward for a racer that doesn’t quit. Alessi’s been nothing but complementary of Ryan all summer and despite the weekly beat-downs by Dungey, seems to have that never say die attitude.

As listeners to the Pulpmx Show and the Racer X Podcast show (and I even went on and on last week in this space) know, I can’t believe that the 800 is just written off as not worthy of being a team member of Team USA by manager Roger DeCoster.

Now RD’s won a shit-ton of MXDN titles so let’s remember that but him questioning whether Mike can get the support needed to go is there is funny. Motoconcepts can build Alessi another bike, send the crew needed for support and still be just fine. Mike Alessi would seem to be the best option for Team USA with his recent form. Image: Simon Cudby.

They’re a well-funded team. The consensus by DeCoster is he is going to put Justin Barcia on the 450 for the race to go along with Blake Baggett on the 250F and to me, this is nuts.

The sands of Lommel aren’t a joke and the USA guys are going to need everything they have to make sure they bring the win home. Sending a guy who hasn’t been on the 450 and is a rookie to the event (Alessi would be a rookie also but he’s no stranger to Europe sand tracks) is a risky proposition in my mind.

One rider who did well at Washougal was Swedish star Frederick Noren who scored a career best eighth in the second 450 moto. Noren rides for the Swedish MXDN team most years and raced the nationals last year for the whole season.

He’s been missing most of this year while he deals with an injury suffered at last year’s MXDN event. Last summer he raced every race and his best was an 11th in one moto.

It’s cool to see Noren here racing with the help of MX Heaven which is a program that welcomes foreign riders and for a fee takes them to the races. Noren joins Evgeny Mikhaylov from Russia who’s been at most races this year as two of the worldwide imports racing the AMA nationals.

This is big summer for former world champion Tyla Rattray. The South African desperately wants to get out of the 250 class that he’s been in since coming over here and move to the 450’s.

Economic realities (and not having big-time supercross skills) have kept him in the 250’s but Rattray got a break this summer with Ryan Villopoto’s injury that knocked him out for the summer.

Tyla fought for the fill-in ride on Villopoto’s bike and his team Pro Circuit let him go. This was Rattray’s chance to show other teams that he could do damage on the 450. But it hasn’t worked out so far.

At the opener Tyla caught a rock to the hand on the first lap of the first moto and was out for five races. Once he came back he rode strong at RedBud but since then, it’s been a DNF in one moto at Millville and then a terrible race at Washougal.

In speaking to Tyla, it seems that he’s a bit under the gun with his testing and the bike isn’t working that well for him right now. He was rushed before the series a bit and then got hurt.

Here’s betting that he’ll use the two weeks off to test, test and then test some more and we’ll see a different Rattray at Southwick next race. 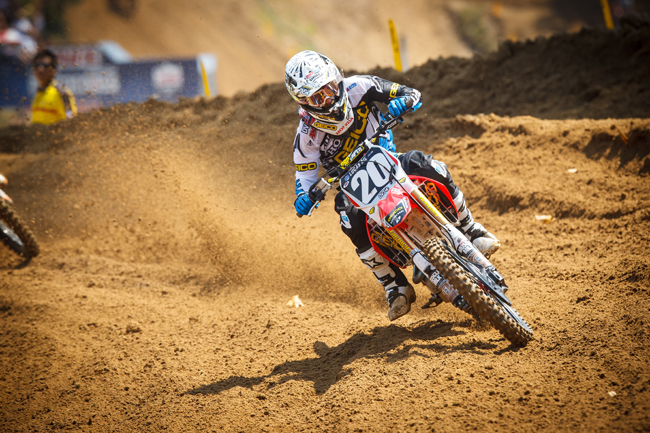 Justin 'Bam-Bam' Barcia looks set to jump up to the 450 for Team USA in this year's MXoN. Image: Simon Cudby.

Washougal is a tricky animal. It’s slippery, shadowy and hard to pass on. I remember when I was a mechanic for Tim Ferry and we entered Washougal on a roll in 2003. He was third in the points, making the podium most weeks when we got to Washougal. And then, in what can only be called a disaster, Ferry went 11-13 on the day.

It was a shocking result and a combination of bad starts, a couple of tip-overs and who knows what else. I think we dropped from third to fifth in the points after that day.

For another example of weird things at Washougal, how about the fact that Ryan Villopoto, who grew up on the track and is one of the very best riders in motocross history, has never won there? Yeah that’s right.

The Ryan Villopoto sweepstakes are in full effect and despite most people in the pits believing that re-signing with Kawasaki was a given it appears that Australia’s favorite son Chad Reed has stirred things up with an admission that he’s trying to get RV2 on his team.

So what’s the deal here? Well most people do think that he’s going to go back to Kawasaki still but as with all things sponsor related here in the mx world, it all comes down to what the energy drinks want to do. They’re the ones with the money!

Just know this, I’m a lot less sure that Villopoto is going back to Kawi than I was a month ago. The longer this deal drags on, the more likely it is that RV goes to Reed’s team or perhaps the Larry Brooks/Jeremy McGrath squad that has re-entered the sweepstakes.

I’m working the phones on this and will have more in Racerhead on Racerxonline.com tomorrow. Speaking of silly season you know who’s making themselves out to be a wanted guy? Broc Tickle, that’s who.

Tickle was Mitch Payton’s first ever full-time big bike guy (mostly because of a contract snafu where he had a two-year deal but because he won the 250 title he was kicked out of the class. Mitch and Kawasaki chose to honor the agreement) and didn’t have the supercross season that most thought he would.

He was all right but didn’t appear to take that leap forward that he could, or should have. Well the outdoors has been pretty good for Tickle as he separates himself from his “normal” group of riders and creeps towards that second and third spots that have been mostly held by Alessi and Jake Weimer. Tickle’s supercross season is but a bur as I’ve spoken to three teams that are all on the “Tickle trail” right now. 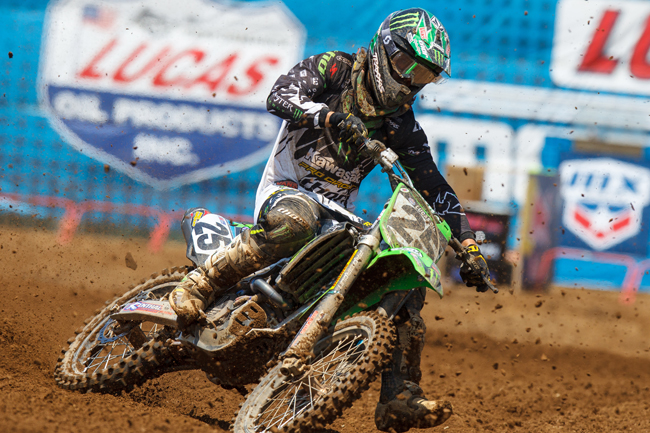 Broc Tickle has been impressive in his rookie outdoor 450 season for the Monster Energy/Pro Circuit Kawasaki team. Image: Simon Cudby.

The Star Racing guys can’t keep anyone healthy right now. They even picked up Canadian privateer Cole Thompson for the rest of the season and he went out on the first lap with a crash. They moved 450 rider Ryan Sipes down to 250’s for the rest of the year and hopefully Thompson is doing ok.

With sponsorship agreements in place that state a minimum number of bikes on the track, teams have to juggle guys in and out due to injury. Nico Izzi will be back on a 450 when the series returns and the team will have a couple of 250’s and one 450. Regular riders Kyle Cunningham, Gareth Swanepol and Kyle Peters are all out with injury right now.

Off the track news for the team was them letting their team manager Doug Schopinsky go. In what was billed as a cost cutting move, the team had injured rider Ryan Morais still on payroll and wanted to give him a chance to manage a bit.

So Morais, one of the nicest guys in the pits, puts the headset on and runs the team for the last four races. Make no mistake about it though, Ryan still wants to race as he recovers from a bad crash at LA Supercross earlier this year.

Mike Brown came out of the woodwork for some nationals for a couple of reasons, one is that the 40-year old wants to hold onto his national number of 3 for another year (the AMA instituted a minimum 25 point rule if you wanted to hold onto a career number) and plus, he’s just a bad-ass.

But in his return, Brown has definitely had some bad luck. At RedBud he DNF’d both motos with either running out of fuel or fuel-pump problems. At Millville he did alright in both motos and this past weekend at Washougal, the gremlins struck again as he was running inside the top ten.

That’s three finishes and three DNF’s for Brown and as of this column, he was three points shy of getting the 25 he needs.

Interesting that Brown is on the new Dungey-replica 2013 KTM 450 and having issues because privateer Les Smith of the Langston-Whitt KTM team is about the only other rider in the field on the bikes and he too has had problems.

Clutch issues haunt Smith all season and the factory team is trying to help but there are just not enough parts in the country to help Smith out.

The bike is so new that the aftermarket guys don’t have everything up and going yet. Again, another reason to tip your cap towards DeCoster, Dungey and the KTM guys as they’ve yet to have one issue this season on the new bike.