For this latest edition of The Matthes Report I am going to lay down some of my thoughts and musings after seven rounds down in the AMA series.

Myself and many other people thought that Ryan Dungey and the KTM guys were biting off more than they could chew when they announced that there was an all-new bike coming for Dungey for the 2012 supercross series.

The learning curve would be steep no doubt about it and as well, 2011 team riders Andrew Short and Mike Alessi pushed their bikes off the track more than a few times due to some things out of the teams control. And now they were hiring a rider that pushes equipment to another level and on a brand new bike at that.

So to sit here with only five races left in a 29-race season and have Ryan Dungey have a trouble-free supercross season where he won a couple of races and until injuring himself, was only a couple of points out of the lead. And outdoors, he’s got a huge lead and is going to wrap up the 450 outdoor title again with no troubles.

The faith that Dungey put in his old team manager DeCoster is being rewarded in spades. The bike itself appears to have some overheating issues that the team is addressing as well as some riders who have been racing the production version have reported clutch problems but so far, Dungey’s machine has a perfect record.

This to me is the biggest news of the Ryan Dungey to KTM marriage, the bike’s been proven and like the company’s slogan says, it’s ready to race. 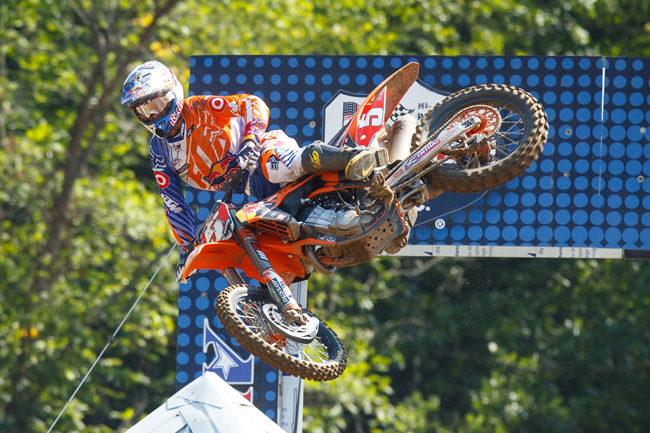 Ryan Dungey's KTM move was doubted by many. The former champion has proved them all wrong. Image: Simon Cudby.

The riders trying to get that second spot behind Dungey in the outdoors are a varied bunch. Mike Alessi has scored a couple of runner-up spots, Jake Weimer has one, Justin Brayton has one and Broc Tickle has one.

And in the points, Alessi has a twelve-point lead over Weimer for the runner-up spot with the guys swapping 2-3 mtoo scores this past weekend at Millville. The race for second is going to be interesting as it’s most likely going to be Weimer or Alessi who gets it.

Fourth place Andrew Short is a little ways back. There’s some nice bonus money for Weimer to end up second in the series and Alessi probably has some sort of insurance contract to secure a bonus for him as well. Neither of these two are on Dungey’s level but their race within the race is interesting as the series winds down.

The annual selection for Team USA is coming up and even though I’m Canadian, I’ve been living down here almost as long as I lived in Canada. So I feel like I have two teams to cheer for and a rooting interest as well. If there ever comes a day when Canada surpasses the USA in motocross acumen, I’ll be practically insufferable. Yeah right.

Anyways, team manager Roger DeCoster has a slam-dunk choice in Ryan Dungey, a wild card in James Stewart and as far as the MX2 choice, to me you take Blake Baggett, Justin Barcia or Eli Tomac- whichever guy wins the 250 outdoor national title (Baggett has an 18-point lead with five races left).

DeCoster gave an interview where he indicated that he was wary of selecting Stewart because of his unpredictability and with Alessi, he’s got concerns with his support from the privateer team. DeCoster seems to think that moving Barcia up to the 450 class is the best idea.

I have to admit, I’m a little surprised by this move but really, Barcia showed last summer that he can ride the bike and he’s fast in the sand (this year’s track is deep sand). If I’m Mike Alessi or Jake Weimer I am wondering if I’m chopped liver and what I did to DeCoster to not get a look but in the end, Team USA will be the favorites no matter who goes and it’s an embarrassment of fast riders to choose from. Bam-Bam could possibly be bumped up to the 450 for Team USA this year. Image: Simon Cudby.

Speaking of the MXDN and speaking of Canada, privateer Cole Thompson has already been named to Canada’s MXDN team and on a Honda 450, this kid has scored top ten finishes in three out of the last four motos. And that’s enough to land a ride with the Star Racing Yamaha team for the last few nationals on a 250F.

Thompson started the series off slowly but is finding his stride lately with some impressive speed and great endurance as well. But now, he’s going to find the going much tougher in the 250 class where the powerhouse teams of GEICO and Pro Circuit reside.

Nice to see a kid rewarded for his hard work but I do worry about being thrown to the wolves in the hyperactive 250 class. Keep and eye on Thompson this weekend at Washougal to see how he does on the new ride.

The three amigos in the 250 class (Eli Tomac, Justin Barcia and Ken Roczen) need to be thankful that Blake Baggett went down in the second 250 moto because frankly, this one was over.

In the first moto Baggett came from about seven or eight seconds down to pass the amigos and eventually win by seven seconds which is just a devastating outcome for anyone hoping to race with Baggett. And when he grabbed the lead in the second moto, it was over until, well, it wasn’t.

Blake’s crash threw the guys a bit of a lifeline and in fact, Tomac and Barcia made up a few points on Blake for the championship. Still, to me, Millville spoke volumes about who’s got this title on lock-down and who doesn’t.

Silly season in America is in full swing with the pending announcement that Dean Wilson’s deal with Jeff Ward Racing looks to be happening. Justin Barcia, as most of us know, already signed with Honda, and just like that- two of the hottest properties were off the market.

Wilson could have stayed in the 250 class but just felt like he was too big for that bike. Wilson’s got Monster Energy backing and that limited him to where he could go. At JWR, he’ll have factory parts, Monster backing, be able to wear whatever gear he wants and be the team’s number one guy.

Jeff Ward himself was a big help in recruiting Dean and the Scottish-born Ward really impressed his fellow Scot Wilson. 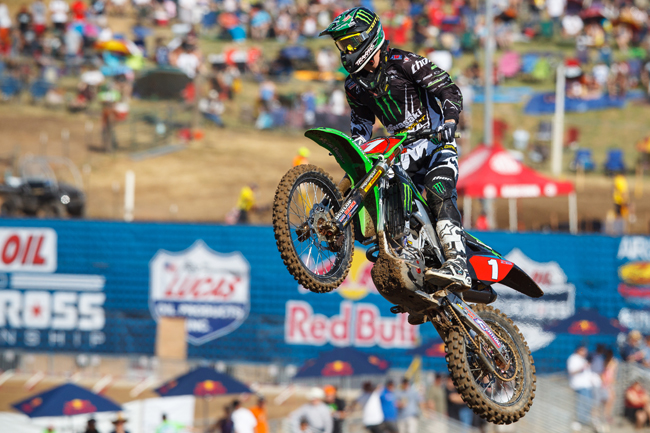 Dean Wilson moving to Jeff Ward Racing in 2013 is the hot topic of the moment. Image: Simon Cudby.

I was talking to some factory Honda guys and it seems that Jeremy McGrath has been hard at work getting the all-new 2013 CRF450 ready to go for the guys. The machine has a new frame, dual exhaust, new bodywork and all in all, a (hopefully) step forward from this years bike.

The reason I bring this up is to talk about why Honda has their crap together compared to some other teams out there. They have one of the best riders to ever live, who still goes very fast, out there in July working on the new bike.

The team can retrofit works parts to the new bike, figure out what they need built in Japan. So now when 2013 team riders Trey Canard and Justin Barcia get on the bike for the first time, the guys at Honda will have weeded through parts and settings that they know are solid. Just another example of Honda setting the pace.

They’ve also been holding nationals there since the mid-80’s and the original awesome incredible loamy dirt is long gone these days.

The base is slippery and with some rocks here and there which make for a long day for the tire companies. Washougal is a track that’s very hard to set your bike up for and as well, there are some serious shadows out there that play with a riders eyes.

The track was once awesome but these days, it badly needs some new dirt or some re-routing to give itself a bit of a face-lift. Throttle control and patience are needed this weekend.