The AMA nationals hit the halfway point with the just completed RedBud national and we saw more of the same that we saw two weeks ago when we last saw a race.

Blake Baggett of the Pro Circuit Kawasaki team won the 250s and KTM’s Ryan Dungey dominated the 450s. Both riders are in the points lead in their respective classes and both riders seem to be getting stronger as the series rolls on.

Even with Suzuki’s James Stewart showing up, Dungey was on another level from everyone else in the class and Stewart, well he ended the day third overall after a couple of falls got him a sixth in the first moto. Stewart has only ridden four times since getting hurt at Lakewood and he wasn’t able to return to match Dungey.

And truly, it’s going to take a big effort from Stewart to get back to the level that he was on before he got hurt. Dungey is getting stronger and stronger each week it seems. And by the way, turn out the lights – the 450 Class championship is done. The ultra-smooth Dungey has got it wrapped up.

In the 250s, Baggett’s really got it going on since working on his starts before Budds Creek. They were really the only thing stopping him from winning more motos before that point. Right now with Baggett’s speed and endurance, his 19-point lead is looking more like 190 points to his competitors. 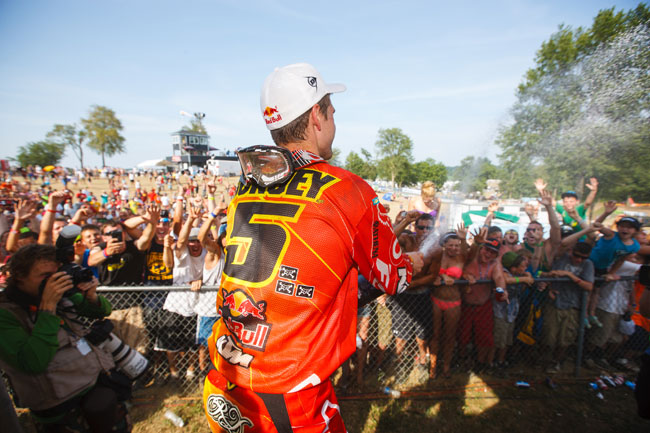 Ryan Dungey is running away with his second 450 Class title in American Motocross. Image: Simon Cudby.

The only hope that they can hang on is that last year, after dominating RedBud, Baggett faded the second half of the series. But in my opinion, I’m sure he’s learned from his mistakes last summer.

Something that I do want to talk about that is really cool was the arrival into the series of a couple of greybeards – KTM’s off-road hero Mike Brown and John Dowd. How awesome is it to see both of these dudes show up at RedBud and try to race with the kinds?

Brown, pushing 40, was in the points both motos, but suffered from mechanical problems both motos. Dowd, an incredible 46 years old, finished just outside the points each motos.

Besides the obvious love of racing and competition, both riders are motivated by keeping their AMA assigned numbers. Brown got his number three by winning the 2001 125 national championship and Dowd, well he got his number 16 by earning enough points to finish the year in the top 10 overall.

Think about that for a second, Brown is almost 40 and Dowd is 46, simply amazing that both men, in over 30-degree Celsius heat, raced two 30-minute plus two motos.

Neither of these guys have anything to prove to anyone and their legacy’s will go down no matter what they did at Redbud 2012. Both of them should be inspirations to any vet racers reading this and trust me, they were inspirations to the fans out there as well.

Brown started racing supercross and motocross in 1990 and besides his one national title, he rode for a few factory teams in America and in Europe. He’s truly been a motocross mercenary. He’s reached the mountaintop with his national title and he’s still out there terrorizing the younger racers. Heck, he just won a X Games gold medal in the Endurocross event. Mike Brown is motocross, it’s that simple. 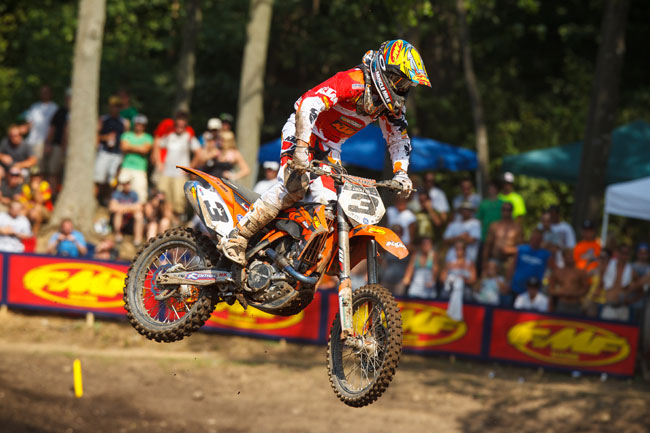 Mike Brown can still run with the rising stars in what has been an illustrious career. Image: Simon Cudby.

Dowd, started racing pro in 1987 and his third year of being a pro, made the podium at his home track at Southwick. Four years after that, he won the very muddy one-moto Hangtown national. He followed that up by winning Millville in 1994 as a privateer on a factory bike and then was a factory rider for the next seven years.

Think of all the racers that a guy like Dowd has lined up to, and beaten, over the years. Jeff Ward, Rick Johnson, Jean Michel Bayle, Jeremy McGrath, Jeff Stanton, Johnny O’Mara, Ricky Carmichael, James Stewart, Chad Reed and Kevin Windham. His career has spanned 25 years and he’s seen stars come and go and then come and go again.

A friend of mine is veteran privateer Jason Thomas of the BBMX team, he’s been racing pro since 1998 and is hanging it up at the end of the year. JT hasn’t attained the success that a Dowd or Brown has but has held numerous national numbers and made many top 10s over the years.

And he also found himself battling Dowd at the end of RedBud this past weekend. Both riders were out of the points and had no chance of getting points but Thomas said that Dowd was coming on strong. Think about that, a former winner, with no chance of scoring points was going at it on the last lap like he was in second going for first instead of 22nd going for 21st.

Thomas said the pressure was intense and he had to go all out to keep the ‘Junkyard Dog’ behind him. In fact, Thomas held Dowd off and recorded his fastest lap of the whole race on the very last lap.

Dowd says age doesn’t matter to him and that he thinks the same out on the track like he used to do when he was 30. That attitude is what made him who he is, shapes him and it’s why we all need to tip our hat to guys like Dowd and Brown. They’re racers, that’s not what they are, it’s who they are.