After two weekends off (which seriously felt like a month to me. Heck I was so bored, I headed up to Canada to catch a national up there – that’s how desperate I was for racing!) the American motocross series picks back up this weekend for round six of the 12 event series at the famed RedBud Track N Trail in Michigan.

Here are some thoughts and opinions about this race and also, the Canadian national I attended last weekend.

We’re going to be halfway through the series after RedBud wraps up this weekend. With the two weeks off, we just had we’ll see if anyone can use the break to rest, test and improve. Generally speaking this doesn’t really happen but sometimes, you do see a guy make a second half surge.

Last year at RedBud we saw Blake Baggett dominate the race and although he was 14 points down to teammate Dean Wilson, there was no doubt that he had all the momentum. At the halfway point, Wilson hadn’t been able to win a race but he was the points leader.

But then Wilson headed off to Chad Reed’s place in Florida for some practice time and soon he started clicking off the wins. Baggett’s incredible speed and endurance faded somewhat and Wilson really grabbed a hold of the title and would win with a comfortable margin.

And in the 450s, Reed won RedBud and was the series points leader going into the second half. And soon after we saw him crash at Millville and his title hopes went away like his Honda did in the crash. So while RedBud is a good indicator, lots of things can change and there is lots of racing left. 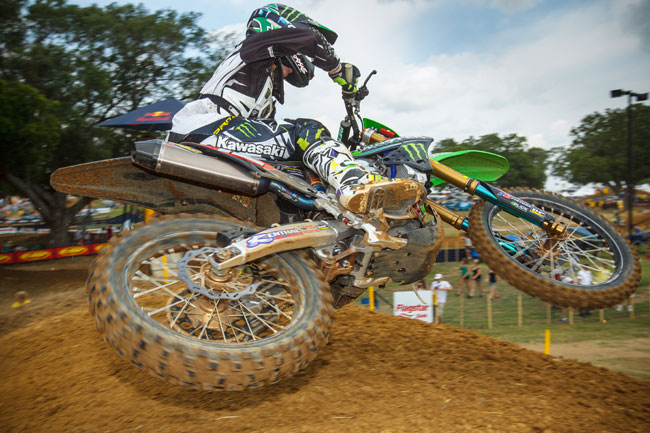 Blake Baggett is on his way to his first 250 Class outdoor title. Image: Simon Cudby.

The 250 guys are going to take this thing down to the wire and sure maybe one, two guys either DNF or crash out but that still leaves two riders battling it out. Right now Baggett’s in the position that Wilson was last year with a nice lead but between Justin Barcia, Ken Roczen and Eli Tomac I have a feeling that Baggett’s not going to just walk to the title. A couple of things I think play into Baggett’s hands are:

A – He was in this position last year and although he faltered, he knows what he was doing last summer and if he’s honest with himself, he can fix whatever it was that went wrong. I think he looked tired so maybe that’s the key.

B – He’s heading to Florida for the second half of the season. His trainer Aldon Baker is there, his buddies Jake Weimer and Tyla Rattray are there and he’ll get into a routine where everything is new and exciting. Much like it helped Wilson last year, I believe this will be to Blake’s benefit.

In the 450 Class, KTM’s Ryan Dungey just has to keep on keeping on. He’s got a nice lead, he’s the best guy in the class and the strategy is to just maintain. Even though Suzuki’s James Stewart is coming back for this weekend’s race at RedBud, Dungey needs to keep in mind his big points lead and if Stewart is checked out, take the second and make the points.

Stewart’s out of the points chase and sure, Dungey doesn’t want everyone saying that he only won because James got hurt but in the end, the difference between them is very slight and the title is the goal. Racking up championships is much more important than racking your body up in order to appease your ego.

If it’s there, battle with Stewart and make your point but if he’s got you covered on this day, take the 2-2 and just mentally think about all that money you’re collecting with the title win.

One rider coming back to the series this weekend is Tyla Rattray on the Monster Kawasaki. Rattray got Ryan Villopoto’s bike for the summer and on the very first lap of the very first moto he broke his hand. So Rattray’s now healthy and ready to see what he can do in the 450 Class.

Tyla, a former world champion and runner-up two times for the 250 outdoor title desperately wants a full-time 450 ride for outdoors and will be hungry to try and make a point. It’s going to be interesting to see where Rattray stacks up with the guys that have been out there. I think that Rattray, a rider who’s in great shape, will be right there inside the top five more times than not.

I realise that I’m probably going to freak some people that are into ‘jinxes’ out with this paragraph but I’d look for some mud races in the second half of the series. It’s just because, well, there’s always a mud race or two in the schedule and right now, through five races, the weather has been perfect.

And therefore, the jinx people are upset right now. I however do not believe that me typing something in a column can affect the weather whatsoever. I know, call me crazy. Anyways, seeing as how its been perfect so far this summer, look for a deluge or two at one of the remaining six races.

Silly season here in America is slowly starting to get rolling. JGR Yamaha’s stalwart Davi Millsaps signed with the Rockstar Suzuki team for next year. Some confusion among fans about whether this means he’ll be James Stewart teammate and this isn’t the case. Stewart’s (and Brett Metcalfe) team is the Yoshimura Suzuki squad while right now the Rockstar Suzuki team is a 250-only team. 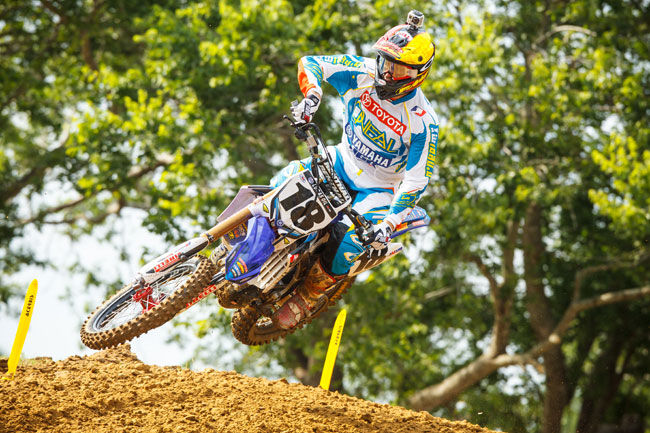 It’s a surprising development and as with most things over here, it’s driven by the main sponsor (Rockstar Energy Drink) wanting to get into the 450 Class. And with Millsaps, they got a rider who finished second in the series last year. Although JGR was close with Davi, they didn’t want to give out a multi-year deal and Suzuki did.

So this is definitely a big step for the Dave Gowland-managed team and it’s going to be interesting to see how Davi does back on Suzuki, the brand that he rode all throughout amateurs and early pro days.

So now JGR, with the defection of Millsaps and earlier James Stewart, are going to start 2013 with two brand new riders. They’re talking to Dean Wilson (who is looking for a 450 ride) and maybe they’ll bring back Justin Brayton if Honda doesn’t bring him back.

The three-year deal that JGR signed with Yamaha prior to this season is hanging there with a lot of riders not believing that they can win on the backwards-engine YZ450F. I’m not saying it’s right or wrong but that’s the belief out there among the racers. JGR is going to have to overpay any of the top guys to get them on blue in 2013 and it’s too bad that perception is sometimes reality.

For the first time in five years, it looks like an American is going to capture the Canadian MX1 title. Right now Leading Edge Kawasaki’s Matt Goerke has only lost one moto all year and has a nice lead. The one moto he did lose was to Rockstar Yamaha’s Bobby Kiniry who’s got a nice points gap in second. With five rounds remaining, one of these two (likely Goerke) will likely win the title.

Canadian riders Colton Facciotti and Dusty Klatt switched to KTM this year and Facciotti has an injured shoulder and Klatt, well he’s just been struggling so far to capture his old form. These two guys could and would challenge the two Americans but for different reasons, they haven’t been able to. So it looks like the Canadian title is going south once again.

In the MX2 class it’s a two-man show between Teddy Maier (American) and Jeremy Medaglia (Canadian) with Teddy having a 16-point lead. Medaglia should be strong on some of his more familiar home tracks once the series moves east. 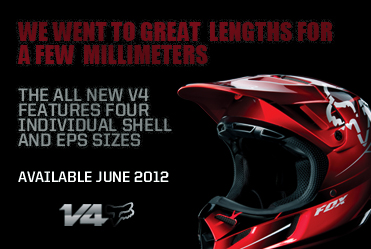