KTM and Husaberg will support the 2012 Yamaha WR450F Australian Four Day Enduro, to be held near Buln Buln, Victoria, from 24-27 October. 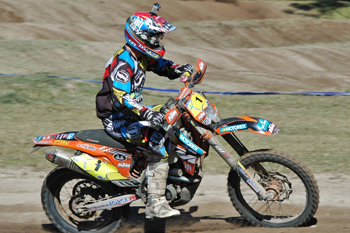 Motorex KTM Off Road Racing's Toby Price will defend his title once again in 2012.

KTM and Husaberg will support the 2012 Yamaha WR450F Australian Four Day Enduro, to be held near Buln Buln, Victoria, from 24-27 October.

As ‘gold’ level sponsors of the event, the brands will feature their own special tests during the A4DE – the KTM Enduro Test and the Husaberg Cross Test.

Chris Gray, chairman of the A4DE Committee and president of the Victorian Off-Road Committee, is thrilled to welcome the new sponsors.

“KTM and Husaberg have a long history of supporting our sport and it is just fantastic to have them alongside for the 2012 A4DE,” Gray said.

“Their generous support is a terrific boost for the event and will help us deliver some great tests for the riders. We can’t wait to see the field take on the KTM Enduro Test and the Husaberg Cross Test.

“With a little over four months to go until competition gets underway, things are coming together really well. The loops and trails are looking spectacular, the tests are taking shape and the entries are flooding in.”

Now in its 34th year, the A4DE has grown to be the second largest motorcycle enduro race on the planet, and this year looks set to be the biggest on record.

The 2012 edition will put more than 350 local and international riders and their machines to the ultimate test, with an intense four day program of trail and special tests across incredible Victorian terrain.

Entries for the 2012 Yamaha WR450F A4DE are now being accepted online at www.a4de.com.