More information regarding price and availability will follow in the coming months.

Honda Australia sent us the following information on the 2013 Honda CRF450R:

Honda is proud to announce the 2013 CRF450R which, thanks to help from AMA Supercross champion, Jeremy McGrath, is sure to take competition to new heights.

Since its initial creation in 2002, the CRF450R has constantly evolved with the key aim of helping its riders to achieve racing victory. The 2013 model incorporates a refined engine, a brand new frame and other major enhancements.

This new-generation motocross machine will guarantee excellent manoeuvrability in a wide range of riding situations. Honda aimed to achieve the lightest body weight in the class, the adoption of front fork air suspension which uses compressed air instead of coil springs, results in reduced weight as well as reduced friction and in turn, improved handling.

The use of a brand new sixth generation aluminium frame combined with dual mufflers achieves outstanding mass centralization while also showing off the model’s lightweight and compactness and a new-generation motocross styling. 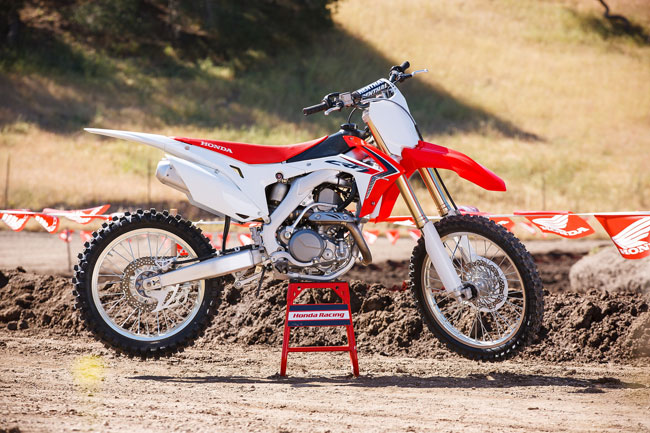 Honda has released information on an all-new CRF450R for 2013. Image: Simon Cudby.

The already renowned, powerful 449cc, liquid-cooled 4-stroke SOHC engine has had major modifications for 2013. Each part including the intake and the exhaust ports and the transmission has been newly designed in order to substantially increase the torque at low-to-mid rpm, while maintaining the high-rpm output that has previously proved central to championship wins.

A change in the piston head shape has increased the compression ratio and ensured more torque and power across the range while the optimization of the valve timing and cylinder head port shape has
increased charging efficiency of the air-fuel mixture.

In addition to this, the inertial mass of the ACG flywheel is around 11 percent larger in order to enhance torque feel at low speeds. This design enables riding that draws on more torque in the low speed range. 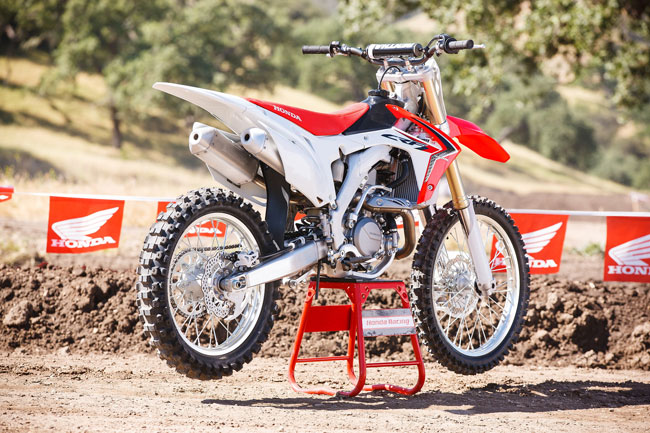 Pricing or availability is yet to be released in Australia. Image: Simon Cudby.

While inheriting the key features and the triangular proportions of its predecessors, the 2013 CRF450R has a new striking design with subtle yet sharp, arrow-like styling. While utilising the same red and white colour scheme that is synonymous with Honda’s CRF range, for 2013 the colour balance has been rearranged to express the fresh character of the next-generation CRF450R.

Jeremy McGrath, seven times AMA Supercross champion and legend in the sport, had heavy involvement in the development and design of the 2013 CRF450R.

Due for Australian release in late 2012, more information regarding price and availability will follow in the coming months.