Honda has launched it's 2013 model Honda CRF450R to the press in the United States. 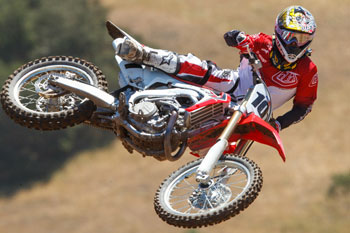 Honda has launched it’s 2013 model Honda CRF450R to the press in the United States, the embargo lifted at midnight on Tuesday in the U.S.

As predicted by MotoOnline.com.au early last month (click here to view), the 2013 Honda CRF450R is based off what we saw in Japan during their national championship earlier this season.

The bike is built for the ‘new generation’ of motocross riders according to Honda, including a new chassis and engine.

There’s no hydraulic clutch as anticipated, which is mostly due to costs of the production model.

After riding the 2013 Honda CRF450R at the American launch at Zaca Station, MotoOnline.com.au’s U.S. correspondent David Pingree will submit a Launch Report this Friday – stay tuned!

Also stay tuned for further information from Honda Australia regarding pricing and availability.