KTM's 2013 model range has broken cover in the United States, confirming expected updates across the board from the Austrian manufacturer. KTM’s 2013 model range has broken cover in the United States, confirming expected updates across the board from the Austrian manufacturer.

The brand’s SX-F motocross range has recieved the brute of the upgrades for this year, including the introduction of a brand new 450 SX-F based off the special Factory Edition that we saw built for Ryan Dungey earlier this season.

The new 450 SX-F will see fuel injection introduced on KTM’s production MX1 contender with a 44mm throttle body, plus it has a number of other important engine mods including a revised bore and stroke, plus new suspension damping front and rear.

An anticipated new 250 SX-F has also been confirmed, with a new lighter engine the big news with a claimed addition of five horsepower, plus a six-speed transmission. You’ll also spot a chamber on the exhaust header, more similar to the Akrapovic aftermarket exhaust.

KTM continues to offer the 350 SX-F as a perfect middleweight option, and development sees it receive a host of engine mods including a new cylinder head.

All of the 2013 model KTMs now have a gun metal frame colour, and all-orange plastic that closely resembles the shape that the Red Bull KTM factory team has been using this year.

KTM’s two-stroke SX range has also been revamped with the new styling, and all bikes feature slight chassis updates. The 250 SX also has a revised engine and further suspension mods.

Click here to check out further information on the U.S. line-up and be sure to stay tuned when we have more from KTM Australia on the local models.

It is expected that we’ll also gain official confirmation on the 2013 KTM EXC range at that point. KTM is launching all of the 2013 models in Italy this week. 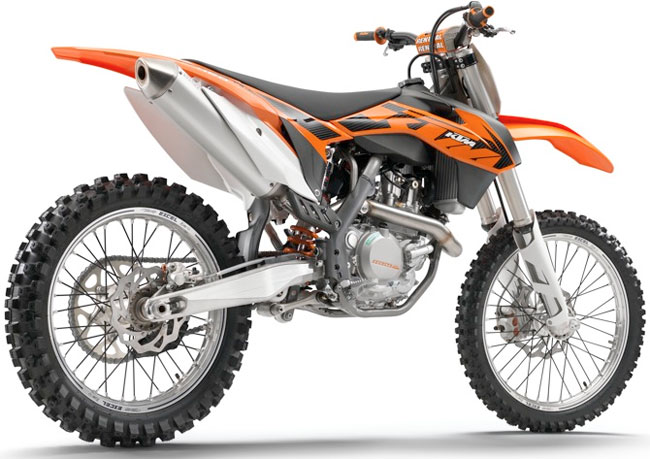 Here's a sneak peek at the 2013 KTM 450 SX-F production model, which is based on the Factory Edition.