It’s been a little while since we last posted an update on MotoOnline.com.au’s Project Moto 2012 model KTM 250 SX-F, but within that period we’ve had the opportunity to complete a couple of very crucial updates that almost every rider considers when they lay down cash on a new ride.

First up, we took delivery of a brand new Akrapovic full exhaust system. Only available through KTM’s ever-trusty Powerparts catalogue (see pricing below), this exhaust is one of the best assets you could buy for a KTM of any type.

From the finish of the titanium sections of the exhaust to the trick carbon end-cap on the muffler, Akrapovic deserves 10 points simply for design. Compared to the two-piece unit that comes stock, this is three main sections and does take a little effort to get on. 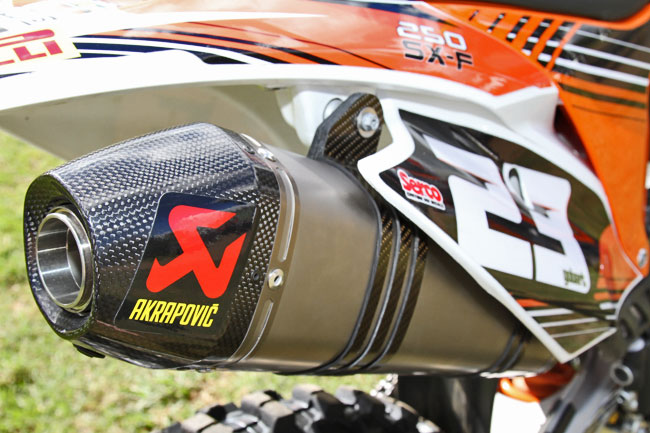 After we undid the rear shock without removing it was all systems go, slotting the system between the frame and engine before putting it all back together again. It was a reasonably lengthy process, but one that includes straightforward instructions, and the fit is spot on.

Once on the track the exhaust note is clearly deeper and barks that little bit stronger, although not overly loud like some aftermarket systems. I would say it’s just about right, but most importantly, the performance gains are very real and very noticeable.

The engine pulls harder and for longer as you’d expect in some ways, but the big thing for me is how it transforms the power available. In sections where the gearing would feel too short previously or where the bike would start to lose power in the high RPM range (where you really should be riding a 250F), it’s now so much better. The finish of the Akrapovic system is first class. Image: Alex Gobert.

Don’t get me wrong, the power of the standard bike is strong and well friendly, however the way it’s delivered with the exhaust seems to suit my style that much better. The bonus with KTM is that you don’t need to do any fuel injection mapping adjustments to suit the power – KTM already caters for the Akrapovic system in its stock settings.

So between having the ability to rev the engine for longer and hold gears, plus the general benefits of pulling quicker up hills or out of the gates, the investment of getting the system is definitely worth it in my opinion and experience.

Interestingly, when we dyno tested the bike this week at KTM Australia’s east coast base where the JDR/KTM Factory Racing team is located, the results explained why I was feeling what I was on track. The initial power and torque curve was vastly similar to stock, but once at the maximum RPM where power is produced, it maintains that power for longer. 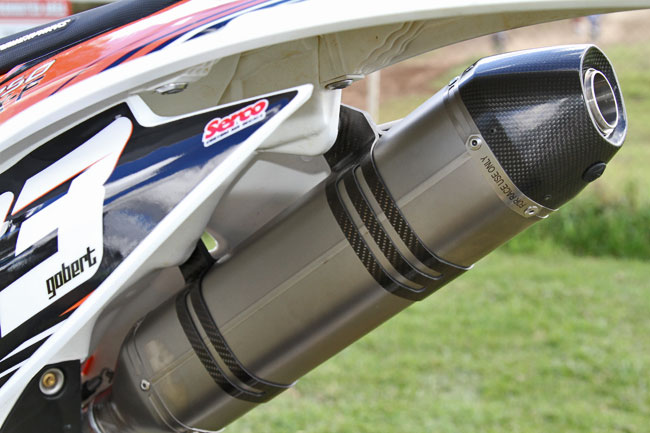 The titanium and carbon tip make for a top finish at the rear from all angles. Image: Alex Gobert.

In total we’re looking at a gain of just over two horsepower (up from 34 to the high 36s), but it’s the way that the power is gained that makes the most difference for me. Stay tuned for a film to come next week as we detail the benefits of the system and also have Rob Twyerould from KTM speak about the Akrapovic’s gains.

Overall I have been stoked with the engine’s performance of late as I’ve really gotten my head around it and the exhaust has made me gel with it that much more. Combined with the chassis, the bike definitely feels like my own and every single change that we have made to the bike simply customizes it to my liking. In fact, if this were my personal bike, these mods are exactly what I’d do.

From the start I was happy with the standard suspension until I went to a track with more jumps. At that point I’d thought it may be better to get it suited to me specifically, but then once I actually got the clickers right and controlled the way the suspension operates (mostly the way the rear rebounds) then its actually spring rates were good for my weight. Project Moto gets taken for a run on the dyno by KTM's Rob T. Image: Alex Gobert.

At a fast, general motocross track like Appin, the bike behaves without a hitch. The steering is by far my favourite point and has been since I first rode the current version of KTM’s 250 SX-F when it was released ahead of 2011. It just steers so good for my level of riding, with a nice ergonomic package that works for me. The front Pirelli Scorpion MX eXTra X is magic, too.

You may recall that I had fitted a KTM Powerparts lower seat before my last update, but at this stage I’m not 100 percent sold on it. Yes, it does have its advantages for shorter riders, but as a rider who sits down a lot when turning, I’m not certain that I find it better than stock.

Regardless though, KTM has a number of options in the catalogue when it comes to seats, so if you are looking for something other than standard, check it out. I’ve stuck with the lower seat for now, but have considered switching back to stock at times. Gains are clear on track, perhaps even more so than on the dyno. Image: Charise Weston.

I mentioned customization earlier in the piece and one vital thing we’ve done is taken delivery of a Serco Custom MX Decals graphics kit from our friends at Serco. Well, we’ve taken delivery of most of a kit, because I was reluctant to trade out the standard embedded KTM radiator shroud graphics just yet.

The standard embedded design that comes on the SX-F models is pretty neat how it can’t peel off or get caught up at all on knee braces, etc, but the only downside is that they do start to wear through it and make the bike age if you’re the type of rider to clamp tight with your knees.

Personally, mine’s only just begun to wear through, so I’m so far more than happy with the stock design and performance. Serco has sent decals for the plates, fenders, fork guards and swingarm though, which allow us to brand the bike in MotoOnline.com.au logos for a nice final touch. I can honestly say that they’re the easier graphics I’ve ever stuck on and they’re priced very reasonably, produced right here in Australia (see pricing below). The KTM’s clean plastic design helps that, but even a few times when I stuck them on wrong, I simply peeled it off where I had to and started again without losing any foreseeable stickiness.

They’ve stayed on too, surviving motos and then the post-race pressure wash while I clean things up afterwards. That’s why they’re designed to do obviously, and the guys at Serco do have a good thing going on up there in Queensland since rebranding from SPP and developing the process. That’s probably why a number of factory MX teams in Australia use their product.

It’s been a great time to date riding and updating the KTM 250 SX-F in 2012. Soon enough it’s going to come to a conclusion when next year’s models start to roll out later in the year, but for now, we’ll keep on riding and loving every minute of it. The reliability and consistency of the bike for what I need have been every bit as good as I could hope for, which is a great testament to KTM.