And with a steady boom from the fireworks and confetti falling everywhere, the 2012 Monster Energy Supercross series was over. With that in mind and with the outdoors coming up in a week and a half, here are some thoughts on stuff.

Ryan Dungey won the last race in dominating fashion and took his rightful spot on the top of the box in the 450 class at the last two races. With all the injuries we’ve had, it’s been interesting to see who can step up and make something happen.

And despite some great rides from some guys, no one appeared to use the extra time at the front due to injuries to get into that ‘Fast Five’ club of James Stewart, Ryan Villopoto, Ryan Dungey, Chad Reed and Trey Canard. Dungey came back from 15 seconds down to win Salt Lake City, and in Vegas it was over before it began. Oh well, there’s always next year!

The Pro Circuit Kawasaki (and before that when they were Honda) team has swept both 250 supercross titles four times in their history and factory Suzuki did it in 1994 with Ezra Lusk and Damon Huffman. Those two teams remained the only team to do the double duty until this year, when GEICO Honda joined them.

Riders Eli Tomac (west) and Justin Barcia (east) did the trick for the team and I don’t think there’s any doubt that those two guys were the best in their classes. And in a bit of a twist, GEICO moved away from Pro Circuit exhausts and help with their motors this past year to go more in-house with motors and Yoshimura for exhausts. It wasn’t anything to do with Pro Circuit, but if you’re competing against one specific team then it’s a little tough to always be going there for help. Not that Mitch Payton at PC would ever not give the GEICO guys his best, but the guys on red just felt like they could spend more time on the dyno with Yoshimura and because the factory 450 Honda guys go with Yosh as well, it just made more synergy to go that way.

Surprisingly when I talked to the riders and staff at GEICO about their year, they credit the changes they did on the chassis to have the most effect on the bikes. As well, team manager Mike Larocco (himself a four-time MX champion) rode the bikes himself and gave the teams riders a good base to start with.

Mike’s been around the block a time or two and really knows how to set up a bike and yes, he would ride the supercross track as well. The motor on the CRF250 is a few years into its cycle, so the team had a good handle on that but in the chassis department (handling, suspension) they felt like they were behind a bit.

Which is something that Tomac himself said last outdoor season. That he felt his bike was a little sketchy at speed. Well, looks like all the changes paid off big-time for the GEICO guys and no we’ll see if they can again topple the Pro Circuit giant outdoors where last year the podium was green almost every weekend.

Well the James Stewart to Suzuki news dropped this week, but if you’re a regular reader of this column you knew that was coming. Let’s just say that my sources are pretty good when it came to what was going to happen.

Stewart to Suzuki wasn’t that big of a shock (even a blind monkey blindfolded to make sure he truly was blind could see that the JGR Yamaha deal wasn’t working) but James starting to race at Hangtown in a week and a half was definitely.

I have a Monday night moto show called Pulpmx Show and Stewart himself called in to talk about the deal… click here to check it out. In it he took the high road with the break-up with JGR, which I expected him to do. James Stewart was this week confirmed for Yoshimura Suzuki after splitting with JGRMX.

There really are no hard feelings on either side (besides the fact that I think the Stewart and JGR team manager Jeremy Albrecht relationship is a bit strained right now), it wasn’t working out for either side. James may not win the nationals but you’d have to slot him 1B to Ryan Dungey’s 1A at the worst.

At the best I think he gains a ton of fans for doing this and I can’t see anything negative with what happened. Sometimes things just don’t work out and both sides took steps to make sure a wrong was fixed. I had someone tell me that if they painted Stewart’s Yamaha yellow and told him it was a Suzuki that would fix James’ issues with the bike and they may be right but as I wrote here, if it’s in his head, it’s in his head.

There’s nothing that JGR can do (and it looks like they tried just about everything besides busting out the yellow paint) to get it out of Stewart’s head that it wasn’t the bike – maybe Lance Armstrong wasn’t right after all. We’ll find out in a couple of months.

Other news made official was Tyla Rattray moving from Pro Circuit 250s to the empty Kawasaki KX450F of Ryan Villopoto. This is a good move for the team and although it left Pro Circuit’s 450 rider Broc Tickle a little upset (as he says that he was told he would get to move up if there was an injury to the factory team) it’s all about the results.

Monster Energy (the sponsor) didn’t want Tickle. They wanted the faster (outdoors) Rattray to make the jump and it happened. We’ll see what Rattray can do on the bike this summer and some people think he’ll be a real surprise.

So with Rattray’s move up, Pro Circuit is in need of a guy to fill that spot and it looks like they picked up Hart & Huntington’s Ivan Tedesco for the spot. Tedesco, a former 250 outdoor champion for PC, was a surprise choice but it was Ivan himself who initiated the conversation. 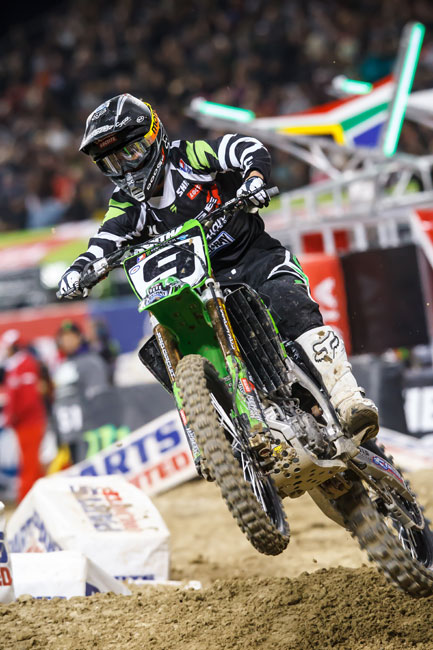 Ivan Tedesco is likely to make a return to Pro Circuit Kawasaki for the outdoors in the Lites. Image: Simon Cudby.

Tedesco has missed two seasons of outdoors as he got hurt with Valli Yamaha in 2010 and last year signed a SX-only deal with H&H. For whatever reason Ivan feels like he wants to go outdoors on a bike that he hasn’t ridden for years. It’s a bit of a puzzling choice, but no one’s looking for him to go out and win.

If he keeps the bike in the top 10, gets a podium here and there, he’ll have done his job. I admire Ivan for volunteering himself for duty in a class that requires you to shut your brain off for the most part. The adjustment won’t be easy but his inclusion into the class makes it more interesting.

I think that once again we’re going to be discussing who can make it to the top of the best of the rest club behind Dungey and Stewart. If that’s what we’re all thinking that is, Stewart hasn’t raced outdoors for a while but to me, he’s right there.

So okay, now that we’re in agreement with that- what about third place? Who’s going to grab that? There are perhaps more suitors for that spot than there were in supercross. Andrew Short, Brett Metcalfe, Justin Brayton, Davi Millsaps, Rattray, Jake Weimer are most of the names that I heard bandied about.

But what about the number 800 of Mike Alessi? He finished a career-best sixth in the SX points and is without a doubt, a better outdoor rider. Mike’s always been great at Hangtown as well. He’s happy on the Suzuki and testing is going great for the Motoconcepts rider. Put Alessi down as one of your dark horses this year people, he could be a real threat.