Nine rounds down, eight rounds left, and here are some random thoughts on a random Wednesday afternoon here in the USA.

We should have realised that last year we had it so, so good in regards to the AMA Supercross series. There were five guys who could win and the point battle was incredible.

We saw a points leader not qualify for a race and his main rival crash out of the same race. We saw back and forth crazy-ass racing and in the end, Ryan Villopoto stood atop the podium with the title.

This year? Yeah, not so much as two winners from last year (Trey Canard and Chad Reed) are long gone from the series with injuries. James Stewart’s in a funk and left standing are Ryan Villopoto and Ryan Dungey. These two are basically going 1-2 the rest of the way and the three points between first and second is going to be the swing for the next eight races.

Unless Stewart can somehow figure his crap out (by the way, I’m on the record as saying James Stewart will win this weekend in Daytona. Dear JS7, please don’t make me look like an idiot once again. Thank you, Steve), it’s going to be a pretty boring title chase methinks.

Oh well, just treasure what we had last year. It was awesome and also, very, very rare. 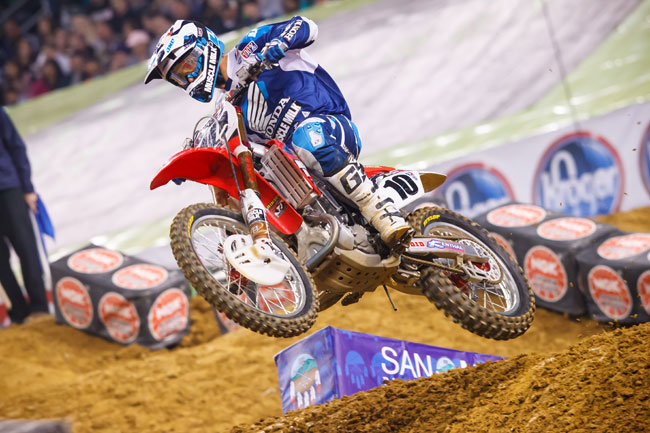 In my opinion, this weekend is very key in determining whether or not GEICO Honda’s Justin Barcia is going to win this east coast 250 series. Barcia’s been dominating the series so far through three rounds, but this weekend is Daytona and that’s a different breed of track.

Blake Baggett won last year and although Baggett hasn’t been as good as he was last year, it’s still a track that suits his style. If Barcia can win this weekend or even battle for the lead and stay close, it’s a huge moment for him and he should coast home for the title.

I’ve been impressed with Honda’s Justin Brayton and his climb to the top of the sport in the form of a factory Honda ride. Brayton’s been a solid, under the radar kind of guy who came from humble roots. He was with JGR Yamaha the last few years and this year jumped to the red crew.

Brayton’s been fighting to get into the top group and earlier this year suffered a leg injury from a bad crash at San Diego that has prevented him from practicing during the week. He’s been gutting it out week after week and finally this week was able to practice some and amazingly enough, got the third spot in St Louis.

I know the Honda guys are impressed with Brayton’s desire to do well and they’re working as hard behind the scenes to help out the number 10. Sometimes, good things just happen to good people.

The Hart and Huntington Kawasaki team has just been decimated with injuries this year. They started with four very good riders (Ivan Tedesco, Josh Hansen, Kyle Partridge and Josh Hill) but quickly they lost Hill at Anaheim 1, then it was Tedesco two rounds later.

Last weekend Partridge went down hard on an ill-designed over/under bridge and he’ll be on the sidelines for the rest of the year. This just leaves the surprising Hansen for the team and they’re hoping to get Hill back in a couple of weeks.

The team is definitely shopping for a fill-in rider for the team and it’s looking like it will be Kyle Regal, who hasn’t raced this year, and last we saw him in supercross, he was on the L&M team as Stewart’s teammate last year.

There are of course some contracts to get done and all that but I’d look for that to happen soon – probably Indianapolis. The team went big this year with two semi-trucks and some big sponsors, but your best-laid plans don’t always happen in this sport.

Cole Seely has been very good on the factory Honda as Trey Canard’s fill-in and this follows up his fill-in ride last year on the same team, which was also very good. The quiet Seely is a very technical rider and seems to be working harder than ever off the track this year.

Seely’s been unable to win the title in his regular 250 class, but he’s won some races. If he tightens up his outdoor game, he could be one of the more sought-after riders for a 450 ride. The only thing is Seely is locked into his deal with Troy Lee Designs for next year on the 250s, so no matter how he does this year, he’s going back down in 2013.

In this sport that rewards riders with one-year contract deals, Seely signed up for another two-year deal halfway through the 2011 season. It’s probably very comforting for Cole to have that security of a contract in his back pocket, but part of me thinks that he’s regretting not being able to see what’s out there in 2013 as far as full-time 450 rides (and full-time 450 money).

Lost in the hype about Kevin Windham’s 200th main event (and again, congrats to KW) was the fact that privateer journeyman Nick Wey raced in his 150th this past weekend. Wey, a factory rider for Suzuki for one year, has been a consistent top 10 rider since his full-time debut in the class in 2002 (a year that he was top privateer and this writer worked as his mechanic for by the way).

He’s made more than a few podiums in the big bike class, a ton of top five’s and as I said, loads of top tens. He’s also been able to do this riding a variety of bikes for a variety of teams. Congrats to Wey on his milestone and to a very solid career.

Man, you Aussie dudes are getting hit harder than New Orleans during Katrina with the way your guys are struggling in supercross. I’ve always thought highly of Australian moto fans because you guys are passionate about your fellow mates that rep for the green and gold, but also, you guys travel to the races – not too mention the Kangaroo hats at the MXDN.

But it’s been dark this year with Michael Byrne going down before the season even starts, Reedy taking a digger and being out for the year. You’ve got the Aussie-owned JDR KTM team and it’s underperforming riders Malcolm Stewart and PJ Larsen on the east coast. Even Cody Mackie’s underdog, sort of feel-good story ended when he was forced to go back home after his VISA expired.

It’s got to be rough for you guys. At least you have Metty out there still running strong and as he always does, digging deep. And you had that JDR KTM Matt Moss podium at the last round of the west series I suppose, so keep your chin up guys, it could be worse. You could be Canadian like me… 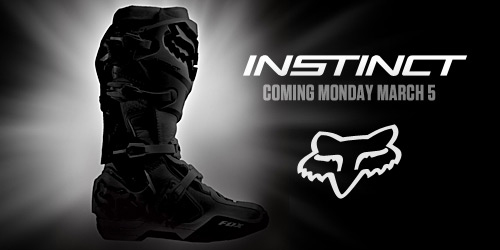