The story many people will talk and write about from Atlanta is Ryan Dungey’s win, which was a great ride for him and another trophy on KTM’s mantle; the continuing presence of a guy out on the track with Stewart on the back of his jersey, but not riding like the James Stewart we used to see and of course, Ryan Villopoto jumping on what were pretty obvious red lights and not being penalised for it. Ladies and gentlemen, another baffling decision from the AMA!

But lost in the shuffle a bit was GEICO Honda’s Kevin Windham and his remarkable milestone of qualifying for his 200th main event. The veteran of the series is 28 main events behind all-time leader (and his current team manager) Mike Larocco, so barring injury he should break it early in 2014 which he’s gone on the record as saying would be his last year.

Windham’s not having the season he wanted to, but he generally gets better as the series goes on. The old man of supercross should have a few podiums left in him this year and maybe, just maybe, a main event win.

It’s been over a year since his last win but if he’s feeling it and gets a start, he can indeed ride away with one of these things in a field that many say is deeper and faster than at any time in supercross history. 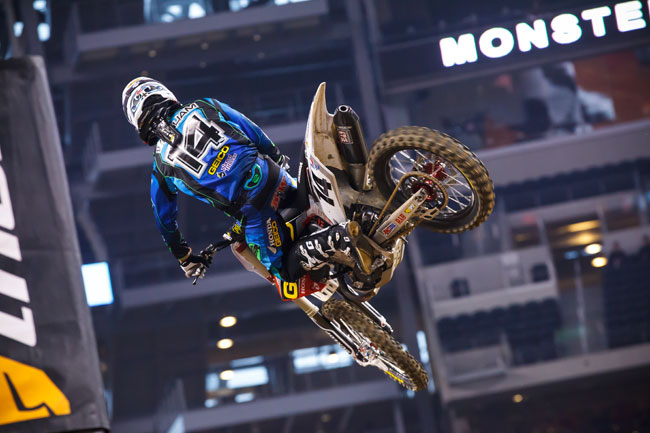 The remarkable thing about Windham’s run to the record is the fact that he missed half the ’02 season and all of the 2003 season after breaking his femur in a crash. Windham’s bone was healed much sooner than when he came back, but there were some things that he had to take care in his brain before he could make a comeback on the Factory Connection Honda at the first round at Glen Helen at that season’s motocross series.

After some stellar rides at Honda early in his career, Windham got a big money deal to go over to Team Suzuki and his first season there in 2001 produced a couple of national wins and there was no outward appearance that anything was wrong with Windham.

That next season began with some mysterious rides from the #14, leading supercrosses and fades to the back or just some rides that were not indicative of the talent that he had. There was a general malaise about him and rumors spread around the pits that Windham wasn’t putting the work in on and off the track.

Suzuki team manager Roger DeCoster’s signing of KW appeared to be a massive mistake as Windham rode around out there seemingly not very interested in doing well. About halfway through the series came a massive break for Windham in the form of the broken leg.

It allowed time for Windham to step away from the sport and as he told me in a podcast I did with him, he needed that time to reassess where he was going with his life. A commitment to his family that he had started was the first step, the second step was getting his leg healed and the third was getting back on a bike. His career was on the verge of being over at 23. 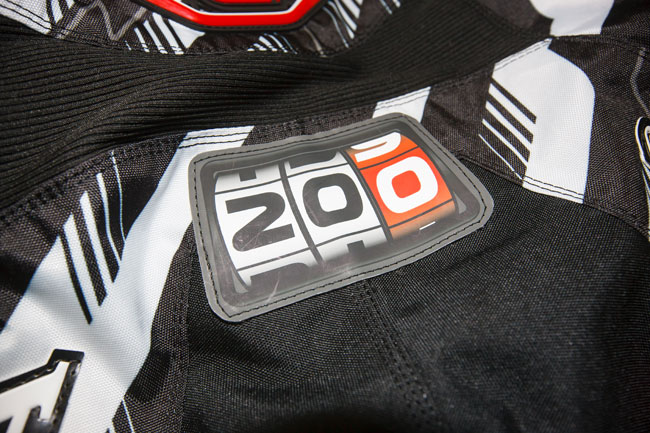 As we know now, Windham came back on a privateer Honda over a year later and ran at the front of the pack, saving his career and starting the second step. Only in professional motocross/supercross can someone go through a mid-life crisis before 25 years of age.

Over the years Windham’s become a real popular figure in the pits because he’s real. You can see it in his interviews, he’s a normal guy (as normal as someone that has a special gift to ride a motorcycle and has made millions of dollars can be anyways) who’s trying to balance a family at home with his career.

Whether he wins again or not, his status in the sport is cemented. Only because he lined up against one of the greatest riders of all-time in Ricky Carmichael does he not have more wins and more championships. No matter though, his 19 career supercross wins and legions of fans make him one of the most successful racers ever.

After his 200th, I spoke with him and as with any racer, he was too upset with his race that night to look at the grand picture of things. A terrible start left him with a lot of work to do in just getting inside the top ten.

“I didn’t get the start and my race was over. I just knew right from the first turn that it wasn’t going to be my night,” said Windham after the night was done. “As far as the 200th thing, I want to focus on the fact that I’ve got some longevity and not on this race.” 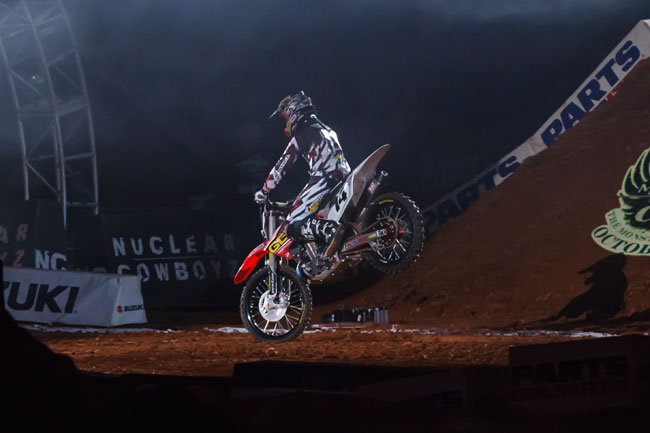 Windham's pre-race into is always one to watch. Image: Simon Cudby.

Any memorable mains for you KW?

“Definitely Charlotte was big it was my first one and I was a 125 guy and the first guy to beat the guys in 250s. That was special. My win in New Orleans in front of my home fans was huge, the win in Vegas was awesome and Houston a couple of years ago was great. They all hold a special spot when I look at the trophies.”

He paused and reflected a bit on the milestone, “I just want to keep going and I have 28 to go to tie Mike. That’s a lot. [Jeff] Emig and Carmichael combined have 228, and it seemed like Emig had a good long career!”

He won’t agree with this assessment, but throw out the results for Kevin Windham, it doesn’t matter how he does. The fans and sponsors don’t care and he’s going to be able to go out on the sport on his terms, which is a rarity. He’s earned every bit of praise that you want to heap on him, he’s the grand old veteran of the series and congrats on the 200th main event Kevin.

And to think, we all came very close to seeing it end before it all really began.