Building Champions Program’s Lee Hogan guides you through the frustration of flat turns.

Everyone loves a nice, easy, flat corner when you first learn how to ride, with no deep ruts or sandy berms to catch you out! However, as an experienced high level racer, flat turns can be one of the trickiest parts of a track that you have to tackle.

When you think closely about it, flat corners for dirt bike riders are an absolute pain in the butt. We have got rubber tyres on a dirt surface with no embankment to hold the wheels in place. It’s not so much of a problem for road racers as heated rubber tyres on bitumen is about as grippy as you can get.

For us it takes about 14 different parts to your overall flat corner technique that prevents your wheels washing out from under you before you have a clue what just happened. If you watch a race in progress, whether it’s a round of the MX Nationals, or just your local club race, you will notice that most of the time made and lost is on the flat corners. Not over the jumps, down the straights or braking like you would think, but through the flat turns.

However it seems to be one of the most neglected parts of a training schedule. Not very often will you see a rider out specifically practicing their flat turns. You will most likely catch them practicing the whoops, or rutted turns perhaps. Without a doubt it is a combination of bike and technique that complete the package, so let’s take a bit of a closer look at the technique needed for superior flat turns. 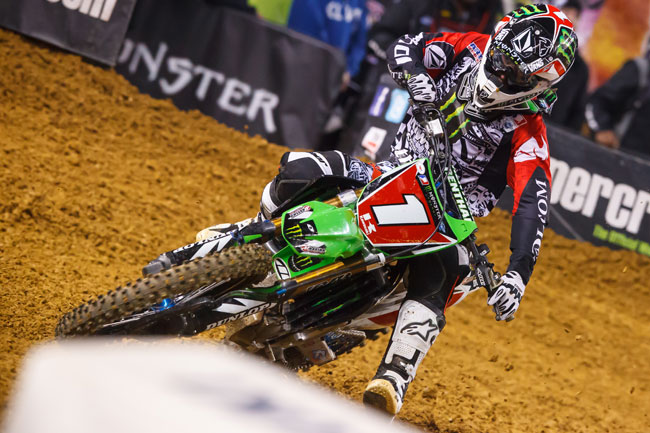 Ryan Villopoto demonstrates text book style how to get through a flat corner. Image: Simon Cudby.

Body Position
The first thing you need to realise when considering flat corner body position is what you are aiming to do, and that is to try to keep your body as vertical (straight up and down) as possible while leaning the bike over. So long as you know this it will help the procedure come together.

Most people you talk to will tell you that flat corners are all about getting your chin over your clutch assembly or throttle assembly depending on which way you are turning, claiming that this is the main technique that keeps your body straight up and down. I agree with this, however I feel that your flat corner technique starts with where you place your bum on the seat.

If you have your butt sitting in the middle of the seat like you normally would, it makes it very difficult to get your chin up to where it needs to be. But if you take the time to shift your bum to the outside part of the seat, it makes it so much easier with less effort to get your chin where it needs to be. I’d go as far as to say that every centimetre you shift your bum and chin to the outside of the bike is a centimetre less that your wheels will wash out on you.

Test
A little test you can do is to get someone to hold your bike while you sit on it with your feet on the pegs. Let the person holding the bike start to lean the bike towards them as if you were doing a corner. As the bike leans over, try to keep your body straight up and down. Make sure you shift your butt to the top side of the seat and force your chin to the throttle/clutch assembly (whichever is higher).

If you are in your correct flat corner position then you should feel reasonably light to the person that is holding the bike for you. They shouldn’t have to use much strength at all to hold you up. Now, give the person holding you a warning before you do this as they will need all their strength to hold you. Bring your bum back to the middle of the seat and start to lean your body at the same angle as the bike. This is your ‘Berm position’ and your buddy holding you will most likely struggle to hold you in this position.

Once you do this little test you will realise that when riding around a flat corner you only have two rows of knobs on your tyres that are actually touching the ground and preventing you from sliding out and the extra effort required to hold you when you lean to the inside of the bike would surely cause a crash. Weighting the outside footpeg is vital on flat turns, as Hoges demonstrates.

Legs
Unlike berms or ruts, your leg should not be reasonably straight and parallel with the bike. The fact that your bum is positioned up on the outside part of the seat makes it almost impossible to get your leg flush against the radiator shroud and parallel with the bike. If your leg is like that then that should tell you that your bum is not high enough on the outside of the seat.

Your inside leg should come straight out to the knee and then point straight down to the ground. In correct position your knee and hip should be close to parallel with the ground. If your lower half of your leg sticks straight out instead of towards the ground then it is exposed for anyone to run into. Your leg should almost look like it is just dangling there, when in actual fact it is held really solid.

Weight Placement
Weighting your outside footpeg is a great addition to your flat corner technique. It is very difficult to watch a rider in a flat turn and actually tell if they are weighting the outside peg but it makes an enormous difference to the amount of traction you get. If you have a track with plenty of flat turns you can quite often get leg cramp from weighting the outside peg. It goes without saying that a bit of extra leg strength goes a long way.

Flat turns can be boring, difficult and frustrating, but when mastered they still don’t feel as good as nailing a berm or rut. I guess that’s why most people neglect their flat turns. Be patient and stick at it!