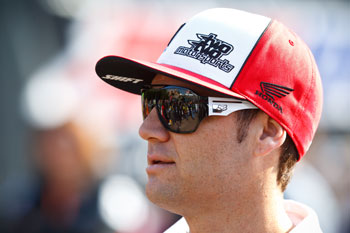 TwoTwo Motorsports has a huge following thanks to the vision of Chad Reed. Image: Simon Cudby.

Reed started the team from scratch 14 months ago, with the desire to go racing on his own terms.

Investing significant start-up funds himself, Reed had received a number of major offers from sponsors outside the immediate industry, however, passed up deals for short to medium term gain to concentrate on the long term growth and strength of TwoTwo as its own, standalone brand.

The relationship with Etnies will be built upon during the upcoming AMA Pro Motocross Championship, where an all-new TwoTwo Motorsports line will feature on track at every round.

On the back of the success of these projects will come future announcements for the brand’s venture into markets such as toys and video games, as well as the social media platform.

Reed said he was proud to see how TwoTwo Motorsports had grown in such a short space of time and was excited about the prospect of upcoming projects.

“Initially it was extremely hard to find major sponsor funding as an unproven entity,” said Reed. “I underwrote myself and committed to doing everything possible to see the team grow on track and off.

“As the results began to come we began to realise that there was a demand for an association with the TwoTwo Motorsports brand and therefore realised the importance of growing it as its own entity.

“I am extremely proud of what we have achieved and the projects we have worked on so far as the success has mirrored our on-track performance.

“The opportunities on the horizon are equally as exciting, and I look forward to making some announcements in the near future to reveal our next steps.”

Securing a team of experienced and knowledgeable crew, the TwoTwo Motorsports operation is also utilising the technology it has developed to build technical alliances, namely, with the Carlton Dry Honda Racing factory team in Australia.