Global Action Sports has today confirmed that Super X will not go ahead in 2012 or future years. 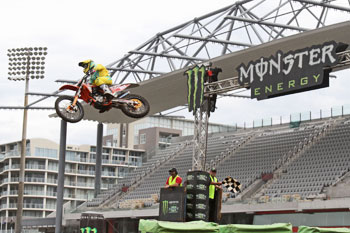 Global Action Sports has today confirmed that Super X, the Australasian Supercross Championship, will not go ahead in 2012 or future years due to a number of factors leading to a substantial financial loss over the past four years.

Super X exploded onto the Australian market in 2008, taking the profile of supercross to a whole new level.

Live television coverage of every round, which was a first for any series in the world, revolutionary new race formats, world class tracks at premiere venues around Australia and New Zealand as well as the biggest supercross crowds and international riders ever seen in Australasia, resulted in recognition around the world.

However despite the positive reception to the series, a successive decline in ticket sales from year one has left the series financially non viable after four consecutive years of losses and a multimillion dollar investment in the sport.

Managing director of Global Action Sports, Michael Porra, said he was incredibly disappointed with this outcome.

“It is with very heavy hearts we have made this decision, but the bottom line is that there are not enough paying fans to support the huge expense of putting this series on,” Porra said. “Even in year two with Chad Reed racing at every round we saw a significant decline in ticket sales where we averaged approximately 6000 fans per round.

“This trend continued in year three and in year four we averaged only 3,500 fans per round resulting in a seven-figure loss. Australia is a very competitive market for action sports as well as mainstream sport and entertainment, and this combined with a very poor economy has definitely played a huge factor in this unfortunate outcome.

“We had a very ambitious vision for the sport of supercross in Australasia and have invested millions of dollars into this series, but unfortunately there appears to be no light at the end of the tunnel and we cannot afford to continue with these huge losses.

“I have very much enjoyed my time getting to know the sport and along with my team, we have done all we can to try and make the series a success. I really hate the thought of giving up, but I am left with no choice.

“I would like to thank Motorcycling Australia, Monster Energy, Williams Event Management and everyone who has contributed to the series over the years and wish them all the best for the future,” concluded Porra.