For the fans of KTM Red Bull’s Kenny Roczen, the chance to see the German star was put on hold as he broke his arm getting ready for the AMA West Coast Lites Supercross series. Roczen, one of the brightest lights out of a whole bunch of fast kids lately, looks to make his first full-on assault on a supercross title when the series opens up for the east coast guys in Dallas, Texas next month. In the meantime, Roczen is healing up and getting ready to start his full-time career over here in the United States. I caught up to Kenny while he was down at the KTM race shop hanging out with his team. 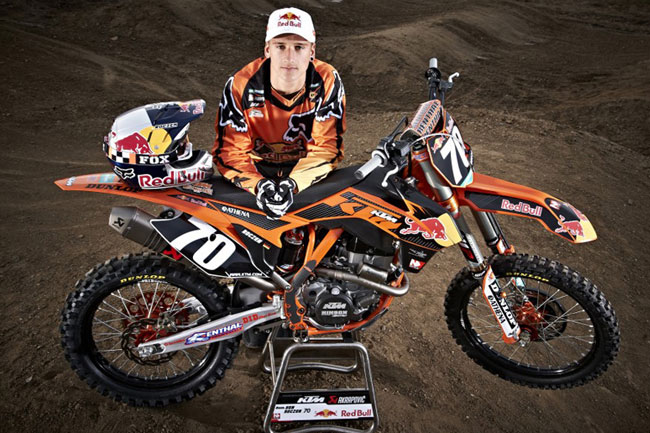 Roczen will go back to his original number 94 if given the opportunity. Image: KTM/Hoppenworld

Kenny, thanks for doing this and you were scheduled to ride the west coast until you crashed and hurt your arm. What happened in the crash?

The crash was at the KTM test track, it was brand new and it happened on the third or fourth lap. I tried a triple-triple, which was what we normally did all the time. I came up short, my feet came off and everything was tight.

I hit the next takeoff and flew off the bike. I landed on my feet which was great but I was off-balance and landed weird. That was all it took. I stood up and the first thing I did was hold my hand and I knew it was broken. When I was walking, it was painful and I knew it immediately.

How did you feel up until that point that you crashed?

I felt great, I think my riding was really good. Everything was going the way we planned and there were a lot of riders that I practiced against out at the local supercross tracks and I was faster and more consistent than them. I felt great and was looking forward to the west. I’d almost say everything was perfect.

The good thing is that you didn’t do this right before the west and screw up both series. This way you can still make the start of the east.

Yeah, for sure because when I first did it I thought I was out of the whole thing you know? But they said it was a radius bone, it should heal fast and I was glad to hear that. I’ll be ready for east.

What do you think about your 250 teammate Marvin Musquin who just made his first podium in his second race?

Awesome for him and for KTM as well. He’s been riding very well out here before the season. He got a good start in the main event which is key, didn’t do anything stupid and didn’t make any mistakes. It was an easy podium for him and if he can just be up there every single race, he’ll be great at the end of the year.

Did you care one way or another which coast you did?

Well I wanted to do the west coast. I have a house in California and I knew all the stadiums from last year. I knew the schedule worked and it was important to know the stadiums and all that. It’s sort of a new season for me because I haven’t been to these places before. You have three or four hour flights every weekend and it’s a big deal to travel that far.

What about Ryan Dungey, what a win for him and for your team in only his second race on the bike.

Oh man it was incredible, I was so happy for him. I know how KTM works and how they’ve been working so hard lately. As you saw in Anaheim, he was good but in Phoenix he got the holeshot and won. [Ryan] Villopoto got a bad start and crashed and sure he ended up third but it was still a great ride for Dungey.

To see the new 450 do well, that was cool because you know how people talk and all that about how the bike isn’t going to be good. Now they all see that he’s a great rider on that bike and maybe even better than he was on Suzuki. Roczen will be ready for the east coast. Image: KTM

Were you surprised that it happened so quickly?

I have to say I’m surprised it happened this soon, I knew he was going to be good but after I saw the other guys at Anaheim, I thought it would take a while but he’s been good.

Roger [DeCoster] and Ian [Harrison] and all those guys have worked so much on the bike, it’s gotten so much better and it’s paid off for them. It’s new motivation for them as well, they see that it is possible. I’m sure Pit [Beirer] and the guys in Austria are really happy.

I have always wanted to, especially before I went back to Europe but on the day I was going to ride it I didn’t have a good day. I was making mistakes and thought I’d better just leave it alone. Maybe I’ll ride it now or real soon.

Looking ahead to Dallas, the defending champion Justin Barcia looks to be your main competition. Would you agree?

Yeah I’d say so. I’ve watched some film and tried to study him to try and beat him. I don’t want to go out there and in the first race, give everything it takes to go for the win. I think for the first race, it’s just good enough to get up and have a solid ride. As the series goes on, it’s time to get serious and bang bars a bit, but for the first race just get a good ride in there.

What about the GP series that you are the MX2 champion of, how do you break that series down?

I think that if you look at it, it’s Antonio Cairoli as the favorite in the MX1 class. Jeffrey Herlings, he’s never been the hunted rider and it’s going to be good to see how he handles the pressure. I’m sure he thinks he’s going to be the guy but it’s not that easy.

There aren’t a lot of fast riders in that class but there are always guys that step up. Even last year there were some good performances put in and I don’t think the class is as deep but Tommy Searle will give him a good run. I know what it’s like to be the rider in the front and have the pressure on you to not make any mistakes and have everyone watching you.

As far as Tony, when I see him practice, I think that he’s going to be the guy to beat, but there’s no one that can match his speed. A guy like Frossard, when they come up from the 250’s, they are all aggressive and scrubbing and all that but they have to do it all year long like Tony does.

After Bulgaria last year, when he hurt his knee, it was like he was done. But the season is so long it doesn’t matter if he’s 10th or whatever early on. I like that, he doesn’t care what he’s doing early in the year but then he turns it on.

You still getting used to your new number 70 over here?

The number is ok, it’s not that I don’t like it but I’ve always had number 94 and I’ve always loved it. It’s always been my number! It’s like when you have a wife for twenty years, when you don’t have her any more you’re bummed and this is the same feeling.

I’m number 70 now and when I write autographs out, it’s still weird. So who knows? Maybe I have to run the number one next year but if I have a choice, I’ll take my number 94 back!