Pirelli are celebrating their historic first ever AMA Supercross win, with JGRMX’s James Stewart taking the top spot at the Oakland AMA Supercross round. 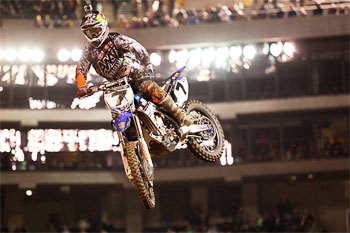 Pirelli and Stewart are a winning combination.

Pirelli are celebrating their historic first ever AMA Supercross win, with Toyota/Yamaha/JGRMX’s James Stewart taking the top spot at the Oakland AMA Supercross round.

After joining forces in 2011, JGRMX and Pirelli have developed a winning combination with Stewart taking his Scorpion SX front and Scorpion MX Extra X rear tyres to the their historic first ever AMA Supercross victory.

With JGRMX being the only leading U.S. team on Pirelli tyres, this win is a huge boost in confidence for the brand trying to break into the U.S. market after already having such great success in the FIM Motocross World Championships.

“We cannot be prouder as we watch this historical moment unfold for our brand”, stated Uberto Thun, Pirelli’s worldwide moto business director.

“I’ve been following closely as have have pulled out all the stops in support of JGRMX and their riders, Stewart and Millsaps. I look forward to this being the beginning of a long and fruitful partnership; we are just getting started.”

Antonella Lauriola, vice president of Pirelli’s NAFTA Region Moto Business Unit, was also thrilled with the result, but extended sympathy to Stewart after his practice mechanic tragically lost his life in the lead-up to Oakland.

“I would like to extend condolences on behalf of Pirelli to the family of Mark Adams and JGRMX,” Lauriola commented. “Pirelli is proud of Bubba and JGRMX in this bittersweet moment – we are behind them 110 percent and will do everything we can to support them at this difficult time.”