There are going to be plenty of times that this column will be Aussie rider based, so bear with me as this is not going to be one of those times. We’re four rounds deep into the AMA Supercross series brought to you by those fine folks at Monster Energy and there are many things that we’re beginning to see as trends and patterns.

There are these people that are paid a lot of money to monitor the stock market and figure out the ups and downs in order for their clients to make more cash.
So with that in mind, let’s take a look at the trends with the supercross series and whether we’re buying, selling or holding out. James Stewart – Holding Out
The JGR Yamaha rider won at Oakland in a very nice ride that was sort of un-James like. Generally if he hasn’t checked out with a huge lead, Stewart doesn’t do well with pressure. Riders applying any pressure to James Stewart in a race has probably only happened to Stewart 10 or 15 times. And I’m talking in his life people.

Anyways, Stewart often grabs some more throttle, tries to do some ree-donkulous move and sometimes he pulls back out, but sometimes he goes down.
But in Oakland, he did neither. He simply withstood the pressure first from Ryan Villopoto and then caught and passed Chad Reed without incident.

I say “without incident” because it seems these two can never not have an ‘incident’. It was a smart and savvy move by Stewart and he showed that his early season results (where we saw crashes and some struggles) were perhaps just to be attributed to the new team (JGR) and tyres (Pirelli). Still, I’m not buying or selling on James Stewart – I’m waiting it out for a few more weeks.

Ryan Villopoto – Buying
He’s got one win for the year and is third in the points, but I’m buying Monster Energy Kawasaki’s Ryan Villopoto because he represents badass speed right now. RV’s been on it every single round but some small crashes and incidents hold him back a bit.

In Oakland he was on the move when he had a few scary moments and took the last spot on the podium. In the heat race he came back to close fast on Stewart by the end. Phoenix? 18th to third. LA? 17th to fourth. He just has to iron out his small issues and he’ll be fine. He’s been the fastest guy week in and week out.

Eli Tomac – Buying
The GEICO Honda rider was a question mark after the first two rounds as we wondered (much like RV) if he could put his small issues of bad starts down and show us the speed that we all thought he’d have. Well, put down that pen because you now only do not need to sell your Tomac stock, you need to buy more.

Eli has won the last two races in dominating fashion and now has a 15-point lead with five races to go. And the word is that he’s in line to jump up to the 450 to fill in for Trey Canard on the factory Honda once the series goes east.

Zach Osborne – Buying
Although I’m buying Osborne stocks, they’re going to lie dormant for a year or until Osborne comes back to America in 2013. You see, Zach’s got an MX2 World Championship to go after in this, his last year in the GPs, and he’s only committed to the first four rounds so despite his second straight podium and sitting 3rd in the points, he’s out. Gone.

Back to Europe he goes, but he’ll be back stateside in 2013 with someone. The kid whose career was done over here had to go to Europe to find it and that is to be admired. He’s serious, works hard and guess what? He can ride supercross. 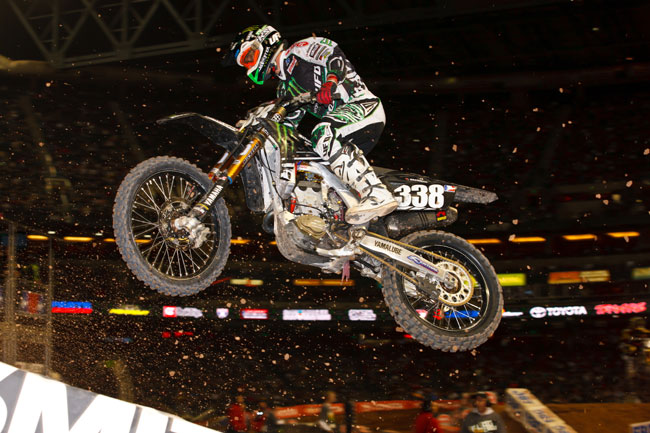 Zach Osborne has been a standout during his 'wildcard' rides in the West Coast Lites. Image: Simon Cudby.

The Rest of the 250 West Class – Selling
There’s five races left and Dean Wilson is 15 points back of Tomac, Musquin is 24 and the other guys are more than a race back. With the speed of Tomac through the first four races, this championship, barring a total disaster for Eli, is over. Last year it took Tomac some races to get going before he found his groove but right now, even if Wilson is perfect from here on out, Tomac has this thing.

Factory Edition KTM 450 SX-F – Buying
Never mind Ryan Dungey, who hasn’t missed a beat since joining the orange crew for 2012, it’s the bike that’s impressed me the most. Dungey’s solid, but what about the Roger DeCoster-led crew at the Austrian giant? They’ve gotten a bike going with a motor from an off-road model, a new frame and swingarm.

And despite having never, repeat never, stepping on the box in a big bike supercross race, the team has done that three out of four races in 2012. And I’ll tell you what, as far as the looks department, that bike is bitching.

Austin Stroupe – Selling
I like Stroupe, he’s a good kid who’s trying to figure out what to do in his life. He’s had off-track issues, on-track issues and just issues period. When you talk to Austin he says the right things to you and you want to believe in him, but like a moth to a flame, he just has bad luck over and over.

This year on the Star/Valli Yamaha team Stroupe was chosen by the factory Yamaha team to be a bit of a test rider with the bike, but it hasn’t worked out. Crashes have set Stroupe back and we’re not sure when we will see him back on the track. Super talented, but he can’t stop catching the bad breaks.

The Tracks – Selling
So far with four rounds down we’ve really only seen one track that has really challenged the riders and that was this past weekend in Oakland, so that gives us hope from here on out that the courses will be better. And we do know that the Dirt Wurx crews want to break the riders in a bit before getting bigger as the series goes on.

But even knowing that Anaheim, Phoenix and LA tracks elicited nothing but groans from most of the riders. Let’s hope that we see some more challenging designs coming up here soon but until then, sell, sell, sell.