Ryan Villopoto has admitted that fourth place finishes won't cut it if he's to stand a chance of keeping his number one plate. 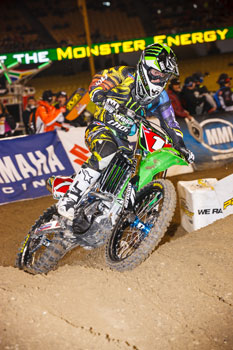 Defending Monster Energy AMA Supercross Champion Ryan Villopoto has admitted that fourth place finishes won’t cut it if he’s to stand a chance of keeping his number one plate.

Villopoto rebounded from an opening lap incident at Dodger Stadium in Los Angeles on Saturday night to take a close fourth behind James Stewart, but says he needs better to win the 2012 title.

Last week in Phoenix, Villopoto rode an incredible race to come from last place to third. After the first lap of the main event in LA, Villopoto once again found himself at the back of the pack.

Just like last week, he steadily made his way through the field with a podium finish looking possible. He reeled in Stewart with a few laps remaining, but struggled to find a spot to make the pass on the tight track and would settle for fourth.

Over the past two rounds, Villopoto has had to make a total of 28 passes and now sits tied for second place in the points standings, just four points back from the leader.

“I made a mistake on the first lap and jumped off the track after the triple,” said Villopoto. “I was last yet again and just had to pass as many people as I could.

“Fourth is alright, but isn’t going to cut it. This track was a lot harder to pass on than last weekend and it would have been a fun track to race on up front.

“We have shown that my fitness and the speed of my KX450F are there, so I just need to dial my starts this week.”

In the supercross main event the race had to be restarted before completing one lap when Trey Canard and Ryan Morais came together over the triple.

This was beneficial for many who might of gotten poor starts, but was unfortunate for Villopoto and teammate Weimer as they held first and second, respectively.

Regardless, RV sent his thoughts to both riders who are currently recovering in hospital.

“I didn’t expect to have to do two starts tonight which is unfortunate, but much more unfortunate for those that were injured,” said Villopoto.

“It’s part of our sport and I wish the best for both guys that got hurt.”