The 2012 AMA Supercross season is three rounds in and Yoshimura Suzuki’s Brett Metcalfe just scored his best finish of the season with a fifth in Los Angeles last Saturday night.

Metcalfe, one of the nicer guys you’ll meet in the pits, can’t be blamed if he looked around and wondered what happened to his team. The once-formidable Rockstar Makita Suzuki team that had Ryan Dungey, Metty, Roger DeCoster, Ian Harrison and Rob Hendrickson from RG3 as integral parts of the team is now just Metty.

The Rockstar and Makita sponsors are long gone with just exhaust manufacturer Yoshimura left as a title sponsor (and really only by default as Yosh has been running Suzuki’s factory effort for a few years so in effect, they were not able to get a title sponsor).

Brett’s now the lone soldier for once what was the factory Suzuki team, but now is a shell of its former powerhouse effort. Still though, that’s not going to stop Metcalfe from doing what he does – work hard, ride hard and keep striving to get better each week.

Last season, his first with Suzuki, Metcalfe got the monkey (or maybe the monkey had grown into an ape, it had been so long) off his back by winning his first race in America when he captured Southwick national. It was a feel good story for Brett, his wife Sheena and his dad Steve who had the good fortune of coming over from Australia and witnessing his son win his first race. 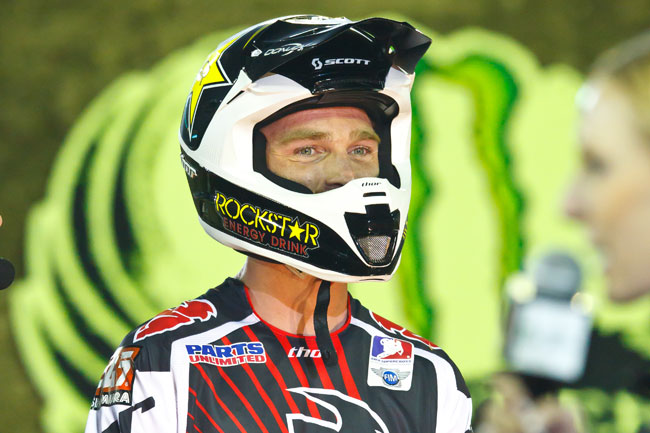 Brett Metcalfe has the weight of Suzuki's entire factory 450 race program riding on him in the U.S. for 2012. Image: Simon Cudby.

Brett made the full-time jump to the 450 Class last year and it was the track that he just scored a fifth on that we saw a glimpse of his potential. At LA last year he briefly led until he fell early in the race. Now don’t get me wrong, he wasn’t going to win LA last year, but it was a blow to fall so early into his first 450 season while up front.

Unless you’re some sort of prodigy, you have to build slowly into being a front-runner and at LA in 2011, it looked like Metcalfe would fill in that slot right behind the heavy hitters. After LA it was the beginning of the end for Metty as more and more crashes caused him to pack it in with injuries.

So for 2011, Metcalfe’s scorecard read nine races, five eighth place finishes with a season best of fifth at Oakland (site of this weekend’s race by the way).

The 2012 season couldn’t have started any worse for Metcalfe when he crashed heavily in practice and went from seventh to eleventh in the main event. For a rider that usually doesn’t go backwards very much, it was shocking to see. Phoenix was a little better and than this weekend in LA, a strong fifth indicated that Metcalfe was back on track.

After the race I spoke with him about his season so far and we laughed that A1 wasn’t very good for him. He indicated to me that he came into the season a bit behind in some testing and hadn’t been happy with the set-up of his Suzuki RM-Z450. 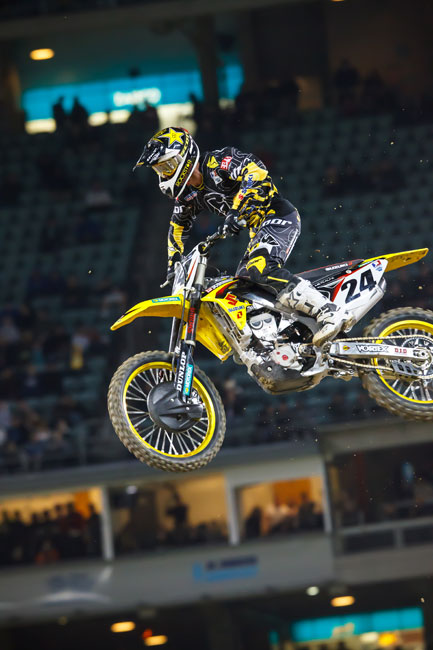 What seemed to be the track was scrapping all the changes him and his team made and putting on the 2011 settings. This is often the case in this sport as riders get used to one set-up while practicing and then when they race, the level is pushed up and the settings that once worked so good on Wednesday suddenly don’t work on Saturday.

Although the team isn’t the same looking, it’s not to say that it’s not an elite team. With underrated team manager and long-time Suzuki man Mike Webb running things, the effort will remain the same as it always has been. There are enough guys like Webb and Ray Tetherton to remember when the team was at the top to keep the train rolling.

Metcalfe is just one of those guys that flies under the radar and if he can keep getting better and make it so that he’s always the guy just off the box, he’ll learn more and more that those guys that do beat him are doing.

As it is now, Brett’s not able to get up all the time to ride in the wake of the top three, learn what they are doing and then keep doing that to make sure that, no matter what, his worst race is a sixth or seventh.

It’s not like he doesn’t have the talent, the bike or the program to take that next step, because he does. He wants to be the guy and if he keeps on doing what he did this past Saturday night, he’ll get there. It’s only a matter of time.