Suzuki manager certain Metcalfe has what it takes in supercross 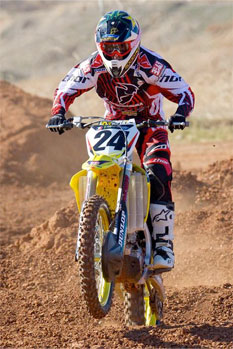 Brett Metcalfe has to transfer his speed at the test track to Saturday nights, according to Suzuki team manager Mike Webb.

Metcalfe is Suzuki’s sole contender in the premier 450 class of AMA SX for 2012, racing to a season-best fifth in Los Angeles last weekend.

Webb, who took over from KTM-bound Roger DeCoster at Suzuki last year, is certain that Metcalfe has what it takes to challenge for the top positions when he finds 100 percent comfort on race day.

“I think that Brett is a lot better at supercross than what is generally thought,” Webb told MotoOnline.com.au while we watched Metcalfe test. “We’re out here today with nobody around and I can watch the guy all day be technically perfect.

“I believe that he’s a far better supercross rider than what he even gives himself credit for, because I’ve just seen him be perfect. To take that to Saturday night when the lights go on, that’s hard to do.

“I still don’t think we’ve seen him near his potential, although we are getting closer every week.”

Webb confirmed that the team continues to search for a base setting on the factory RM-Z450, making a number of large changes to the settings in recent weeks.

Metcalfe struggled at Anaheim 1 and Phoenix, but looked back on point at Dodger Stadium on his way to fifth despite suffering the effects of a cold.

With Metcalfe a renowned outdoor rider, it’s been a challenge to find a setting for supercross, but the team is finally on the right path to make the Aussie comfortable.

“For this year we took what we learned outdoors and used it as a base for supercross, but it wasn’t the right way to go,” Webb added. “He had such a comfort zone outdoor that he kind of wanted to take that and fine-tune it.

“We had to make pretty large chassis changes and the motor as well. [Supercross] is a whole different animal, much tighter, and he’s learning how to trust the front-end.”

Click here to see a series of close-up images for Metcalfe’s 2012 supercross bike in our latest Inside Ride gallery.