Marmont planning return to racing this weekend at Oakland

Australian Ryan Marmont is on track for a return to racing in this weekend's Oakland round of the Monster Energy AMA Supercross series. 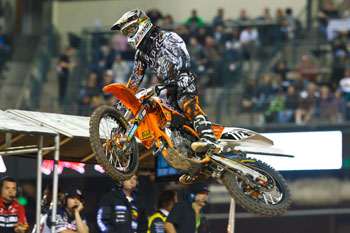 Australian Ryan Marmont is on track for a return to racing in this weekend’s Oakland round of the Monster Energy AMA Supercross series.

The JDR/J-Star/KTM team rider was ruled out of the Los Angeles round with a concussion suffered during training last week, however he today returned to riding and hopes to race on Saturday night.

Marmont has undergone a series of fitness tests, before taking to the KTM test track today alongside Red Bull KTM’s Ryan Dungey.

“I had some days off due to a pretty bad knock to the head,” Marmont explained. “I just wasn’t feeling right and I think it was a good decision to sit out LA.

“I’ve been doing a lot of fitness tests and got back on the bike today, so it felt awesome to be back out there. I’ll ride again tomorrow and then we’ll see how we’re looking for this weekend.”

Marmont impressed in 2011 with a number of guest appearances for JDR on the West Coast in the Lites, but this year he’s largely been behind the eight ball after being called in at the 11th hour.

“It’s been a tough trip and I’ve had no preparation at all,” Marmont said. “If I can race this weekend I’d like to put it in the main, which would be a good accomplishment considering.

“Hopefully I can race at Oakland, have some fun and try my best to get a good result for the team.”

Marmont finished 17th at Anaheim 1 despite little time to prepare, but failed to make the main at Phoenix the following week.