Mackie on track with Jeff Ward Racing team in California?

Speculation is mounting here in the United States that Australia's Cody Mackie is in line to join Jeff Ward Racing. 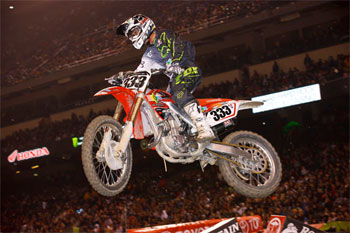 Australia's Cody Mackie has been linked to Jeff Ward Racing in the U.S. Image: Simon Cudby.

Speculation is mounting in the United States that Australia’s Cody Mackie is in line to join Jeff Ward Racing aboard a Kawasaki KX450F.

Sources suggest that Mackie rode with the team for the first time today (Wednesday) in California, however it’s unconfirmed whether or not he’ll race for the team this weekend at Oakland’s fourth round of AMA Supercross.

Mackie has been in the U.S. contesting the 450 class of American Supercross as a privateer aboard a Honda CRF450R, coming close to qualifying on several occasions so far.

If Mackie does in fact join the team, it’d be in the place of Josh Grant, who was forced out of the Los Angeles main event after an incident with Ivan Tedesco.

Mackie was unavailable for comment at time of posting, while according to his Twitter account, Grant continues to undergo medical checks this week to find out the extent of his injuries.

Stay tuned for updates as we get them, but in the meantime, check out this Privateer Profile we did with Mackie yesterday.