Dungey to lead AMA Supercross into Oakland this weekend

With three Supercross Class winners through the first three races of the season, Monster Energy AMA Supercross is shaping up to be another epic season. 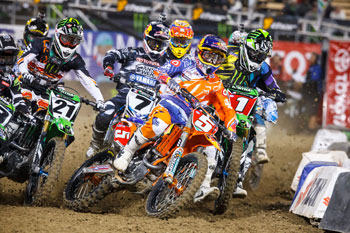 With three Supercross Class winners through the first three races of the season, Monster Energy AMA Supercross, an FIM World Championship, is shaping up to be another epic season.

TwoTwo Motorsports/Bel-Ray Honda’s Chad Reed became the newest face to stand atop the podium this season, and just the second in Dodger Stadium history, after a dominant effort last Saturday night.

By virtue of a runner-up effort, Red Bull KTM’s Ryan Dungey remains the championship’s point leader, and will wear the red number plate for the second straight week as the schedule heads to California’s Bay Area, with a stop at Oakland’s O.co Coliseum on Saturday night.

Last year at Monster Energy Supercross’ return to Oakland, Stewart grabbed his second win of the 2011 season inside O.co Coliseum, with Reed and Dungey rounding out the podium.

The first race was held in Oakland on 18 January, 1979, and Jimmy Weinert won on a Kawasaki. Last year was the first inaugural Supercross Lites class race at O.co Coliseum.