Former GNCC Champion Josh Strang is so far enjoying his switch to RPM KTM after signing with the team for WORCS and Endurocross. 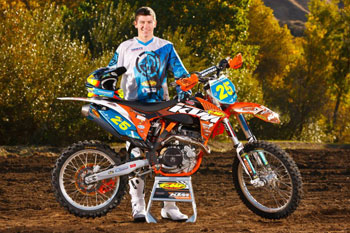 Former Grand National Cross Country (GNCC) Champion Josh Strang is so far enjoying his switch to RPM KTM after signing with the team for the WORCS and Endurocross series in 2012.

Strang continues to recover from a broken leg suffered at the final GNCC round of last year, but remains focused on the goal of racing WORCS and Endurocross for the first time.

“At the end of last year, the last GNCC race of the season, I had a crash and busted my leg,” Strang explained. “It kind of put me in an awkward position and then a couple of weeks after that we figured out that Suzuki was folding up its off-road team.

“I didn’t really have anywhere to go, but I was talking to a few teams and got this WORCS deal worked out with RPM KTM. It was last minute, but I’ll make it work this year and hopefully get some results.”

Strang told MotoOnline that his adaption to the KTM has been a relative easy one, but he’s yet to fully explore its potential due to his leg injuries.

“From back in the Australia days with my old man having a shop, I’ve been a Suzuki guy since I had a JR50,” he added. “It’s been hard making the switch, but so far KTM has been real good and supportive.

“I’ve had a little bit of time on the bike, the doctors released me to ride steady, so my first impression of the 450 is really good and I’m happy with it.”

Strang raced the opening round of the WORCS series earlier this month, finishing 16th on Saturday and 15th on Sunday as he nursed his leg injuries through the round for points.