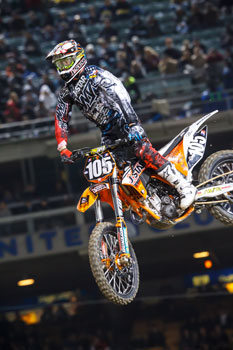 Matt Moss charged through the field in LA after a first turn incident, resulting in eighth position. Image: Simon Cudby.

Moss bounced back from not qualifying in Phoenix to race to his first top 10 in Los Angeles, however he was again forced to work for it after a first turn crash.

As the gate dropped for the main event, Moss had a great jump off the start but was too far to the outside as they neared the first corner and was pushed out into a first turn crash with Cole Seely.

Both riders were slow to get up and remounted in last position. Moss quickly went to work to pick off all possible positions and gain points.

By the third lap he had already passed four riders and was sitting in 15th. Two laps later he knocked off another rider to step up to 14th.

At the halfway point he put a clean pass on Billy Laninovich to move into the top 10. Two laps later he moved to ninth when Marvin Musquin crashed out.

He continued to drive forward and was able to make a last lap pass on Martin Davalos to move up to eighth. His result was his best of the season and a great starting ground for what’s to come of the Australian Champion.

“My goal is to definitely finish in the top five,” remarked Moss. “I’ve been struggling with my starts the past three rounds.

“I am going to work on improving in that area and then I think a top five finish will be within my reach.”

Missing from the racing action was Moss’ teammate Ryan Marmont, who suffered a practice crash this past Tuesday that resulted in a concussion and caused him to sit out this weekend.

Marmont will return to his doctor this week to see if he can be released in time for the Oakland Supercross event.